As the year comes to a close with just two trading days left of the second worst December on record since 1931 for the S&P 500, it may be hard to remember the relatively calm rise before the volatile downturn took over.  Though there is not an official bear market yet, there was a 19.8% drop by the end of Christmas Eve that rebounded nearly 5% on the day following Christmas (Dec. 26, 2018.)  The decline can be blamed on a number of different factors including slowing economic growth in China and Europe, ongoing political uncertainty and turmoil both domestically and abroad, a softening housing market, as well as Fed tightening and businesses facing a tighter credit environment.

Now, every single sector, style and size of the market are down this month, which has only ever happened in 9 other months in history.   While 6 of those months have come in pairs, the Januaries following Decembers of years this bad are slightly positive, up 11 of 20 times, averaging 65 basis points with positive years in 13 of 20 times with an average return of 4.2%.  As discussed in this post, the first few days of a rebound is key for investors, so don’t miss it – and historically, mid-caps and small caps typically do much better in rebounds than large caps.  There are some bright spots as the economy is still growing, the labor market is tight and consumer spending is healthy with contained debt levels.

To end the year, here is a list of some of the most popular U.S. equity market topics for 2018, including the telecommunication services sector expansion into communication services, small caps, rising interest rates and the signal that warned of this near bear market.

Happy holidays to all and thank you for reading our Indexology Blog.  Please let us know in the comments if you have any topics you want to discuss or if you have any questions.

While many investors are concerned about the fact that benchmark indexes for major investment classes are down year-to date, more investors are using S&P 500® options for goals related to risk management and income enhancement. 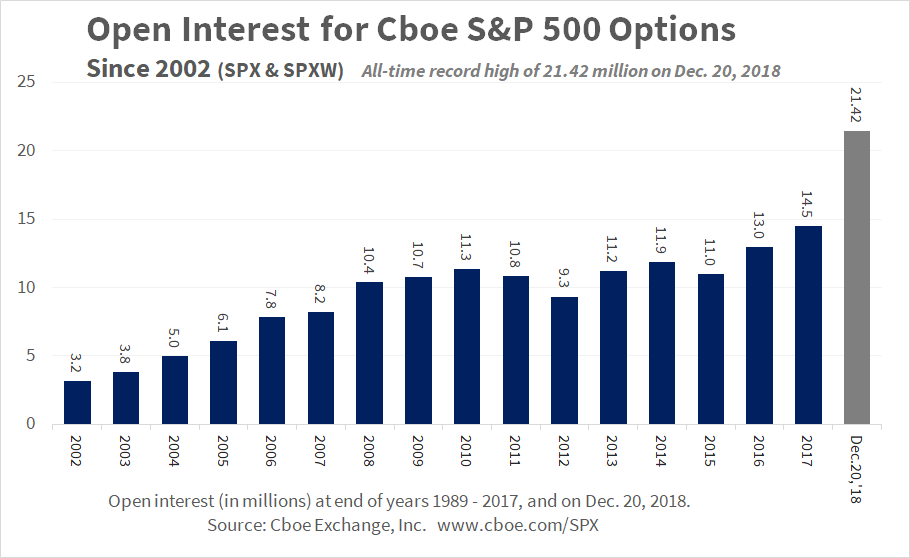 In the past week I spoke with a number of traders and portfolio managers to inquire about their thoughts about the growth to record open interest in S&P options. The responses I heard included –

YEAR-TO-DATE PERFORMANCE AND MITIGATION OF LOSSES WITH CLL INDEX

The chart below shows that “traditional” key benchmark indexes for large-cap US stocks, small-cap US stocks, emerging markets stocks, Treasury bonds and commodities all fell in 2018 (through December 20), but that the Cboe CLL index rose 2% in the same time period. 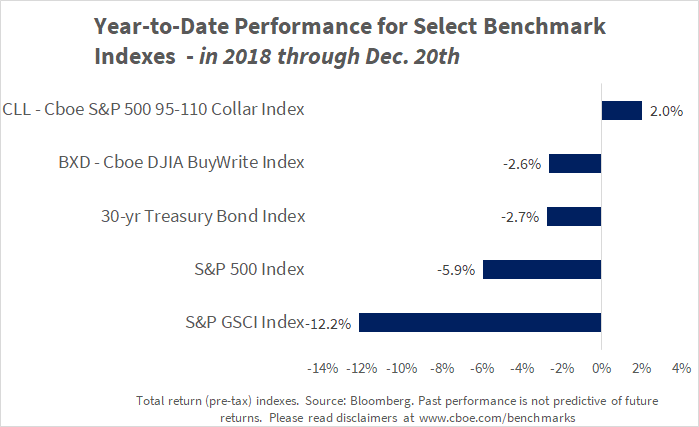 The Cboe S&P 500 95-10 Collar Index (CLL) is an index designed to provide investors with insights as to how one might protect an investment in S&P 500 stocks against steep market declines. This strategy accepts a ceiling or cap on S&P 500 gains in return for a floor on S&P 500 losses. The passive collar strategy reflected by the index entails:

The volatility skew chart below shows estimates for implied volatility (y-axis) for S&P 500 options for the Monday, Wednesday and Friday expirations (dates in legend at left) and at various strike prices (in x-axis). Note that the implied volatility estimates for many of the out-of-the-money (OTM) S&P 500 put options range from 22 to 110, while the implied volatility estimates for many of the S&P 500 call options range from 15 to 40, a much lower range. One could infer from this chart that there probably is quite a bit of strong demand for downside protection with use of the OTM puts. In addition, in recent years many investors have seen the performance of the Cboe S&P 500 PutWrite Index (PUT) and become more comfortable with the idea of selling cash-secured puts on the S&P 500. 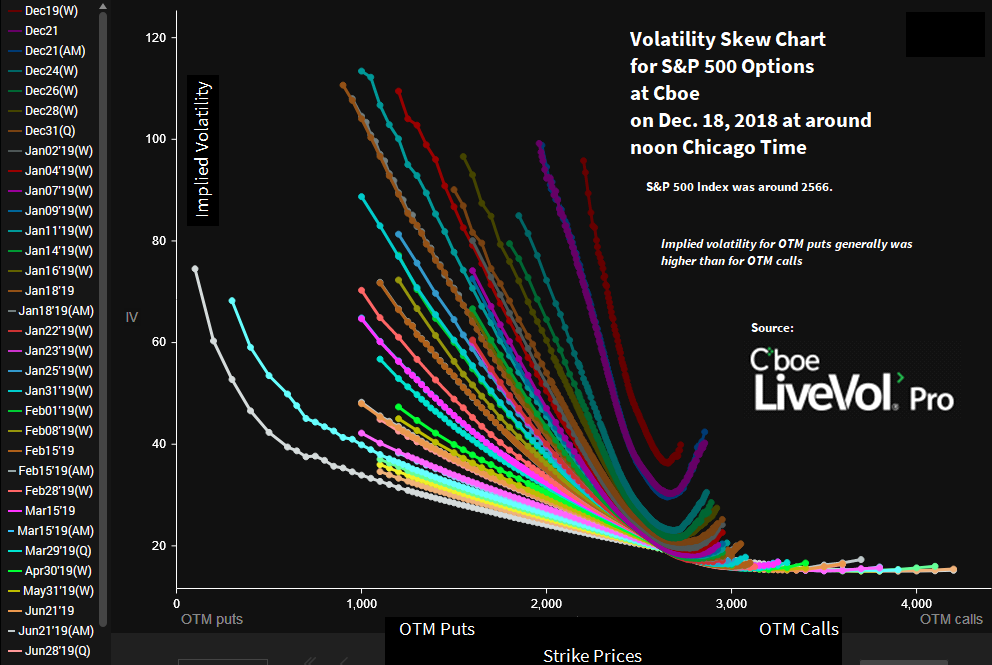 To learn more about ways in which index options and volatility products can be used in portfolio management, please visit these links –

Options involve risk and are not suitable for all investors. Prior to buying or selling an option, a person must receive a copy of Characteristics and Risks of Standardized Options (ODD). Copies of the ODD are available from your broker or from The Options Clearing Corporation, 125 S. Franklin Street, Suite 1200, Chicago, IL 60606. The information in this blog is provided solely for general education and information purposes and therefore should not be considered complete, precise, or current.  Many of the matters discussed are subject to detailed rules, regulations, and statutory provisions which should be referred to for additional detail and are subject to changes that may not be reflected in these materials. No statement within this material should be construed as a recommendation to buy or sell a security or to provide investment advice.  The Cboe S&P 500 BuyWrite Index (BXMSM), BXMDSM Index, PUTSM Index, and CLLSM Index are designed to hypothetical strategies that invest in index options and/or VIX futures Like many passive benchmarks, the Indexes do not take into account significant factors such as transaction costs and taxes. Transaction costs and taxes for an options-based strategy could be significantly higher than transaction costs for a passive strategy of buying-and-holding stocks. Investors attempting to replicate the Indexes should discuss with their brokers possible timing and liquidity issues. Past performance does not guarantee future results. These materials contain comparisons, assertions, and conclusions regarding the performance of indexes based on backtesting, i.e., calculations of how the indexes might have performed in the past if they had existed. Backtested performance information is purely hypothetical and is provided in this document solely for informational purposes. The methodology of the Indexes is owned by Cboe, Incorporated (Cboe) may be covered by one or more patents or pending patent applications. S&P®, and S&P 500® are registered trademarks of Standard & Poor’s Financial Services, LLC and are licensed for use by Cboe, Incorporated (Cboe) and Cboe Futures Exchange, LLC (CFE). Cboe’s financial products based on S&P indices are not sponsored, endorsed, sold or promoted by S&P and S&P makes no representation regarding the advisability of investing in such products. Cboe Volatility Index®, VIX®, Cboe® and Chicago Board Options Exchange® are registered trademarks of Cboe. All other trademarks and service marks are the property of their respective owners.