When I was in the U.S. Army, the doctrine for an attack specified a desired ratio of at least three of us versus every one of them. This would help to ensure an unfair fight. When your life is on the line, you want the odds in your favor.

Why should that desire to tilt the odds in your favor be any different in your doctrine for portfolio management? While some combatants in the active versus passive battle (it’s not a debate) are hoping for an armistice, our Global Research & Development team opened up a new campaign front when they published Distinguishing Style From Pure Style. Findings from the paper show that most value managers were decisively engaged and defeated by the S&P Pure Value Indices across numerous business cycles.

A 15-year period of comparison is particularly interesting to look at, because it takes into account value performance before, during, and after the global financial crisis. Using data from S&P Dow Jones Indices and the Center for Research in Security Prices (CRSP) from Dec. 31, 1997, to June 29, 2018, and looking back 15 years, only 16.9% of active managers with a large-cap value mandate outperformed the S&P 500® Value. How many of those same active mutual fund value managers outperformed the S&P 500 Pure Value? Zero. No prisoners were taken. Exhibit 1 shows fairly similar results across mid-cap value funds. 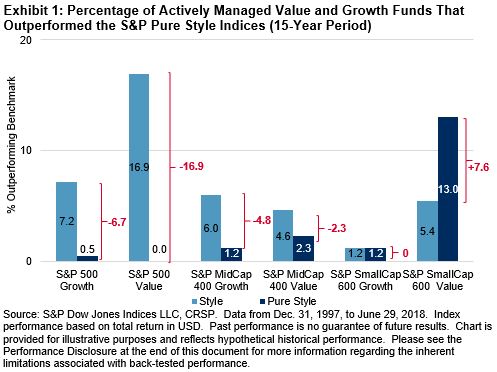 My team is often describing indices as tools. But when it comes to the S&P Pure Style Indices, we might want to start calling them weapons. Weapons of mass active manager destruction.