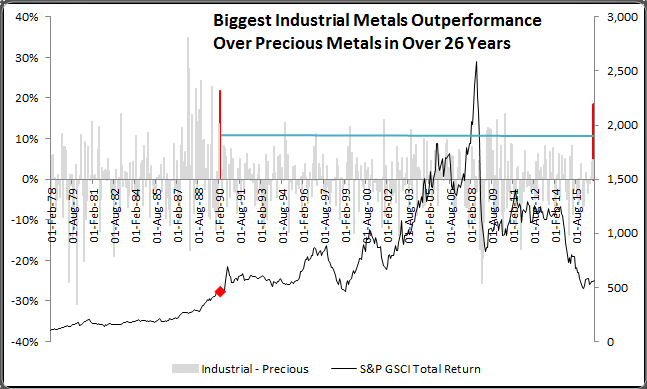 Interestingly, the last time the premium was as big in 1990, oil saw one of its biggest spikes in history that marked a bottom from oil.  While oil had as big as a spike this past Feb. that marked the bottom, these two spikes in the context of history happened relatively close together. While the S&P GSCI Total Return is recovered 26.5% from its bottom earlier this year, past recoveries have had much greater returns. For example the recovery in 1990, returned about 300%.

One concern remains about aggregate demand that would need to drive a true bull market for commodities.  The rise in copper alone does not necessarily indicate an economic recovery, but grains and gas tend to do well with Republican presidencies that can drive inflation.  It is possible that inflation from commodities may not coincide with gdp growth but if there is an increase in infrastructure growth that creates jobs then both copper and growth may rise.  The OPEC cut might mask sluggish demand in its price formation and also many miners have already cut spending that may be behind this spike in industrial metals.  From this it is possible supply is still the driving force in this recovery and whether it continues may hinge on demand in conjunction with macro factors like interest rates and the dollar.