In October, the S&P GSCI Total Return (TR) lost 1.5% but the Dow Jones Commodity Index (DJCI) TR gained 0.1%.  The performance disparity was mainly due to the weighting difference in energy since crude oil in the indices slid near 10% from its mid-month high, on doubts over OPEC’s ability to agree on production cuts and the report from the American Petroleum Institute (API) showing U.S. crude stocks rose by 9.3 million barrels in the last week.

Lean hogs performed best of all the single commodities, gaining 9.1%, giving pork producers something extra to celebrate this October along with their already designated “Pork Month“. On the other hand, silver performed the worst, losing 7.4%, mostly from the dollar strength and growth optimism that happened at the beginning of the month. Despite this, it is still having its 6th best Oct YTD (+27.6%) going back to 1974, and is on pace for its best year since 2010. (Zinc is also having a record year so far, up 51.3% Oct. YTD, its 3rd best in history since 1992, only behind 2006 and 2009.)  If the dollar falls, silver may be one of the most positively impacted commodities, gaining on average about 6% for every 1% fall in the US dollar. Moreover, election uncertainty may drive the precious metals even higher as investors flee to the safe-haven metals, much like they did around the relatively recent events of Brexit, the Chinese stock market volatility and last Fed rate hike. 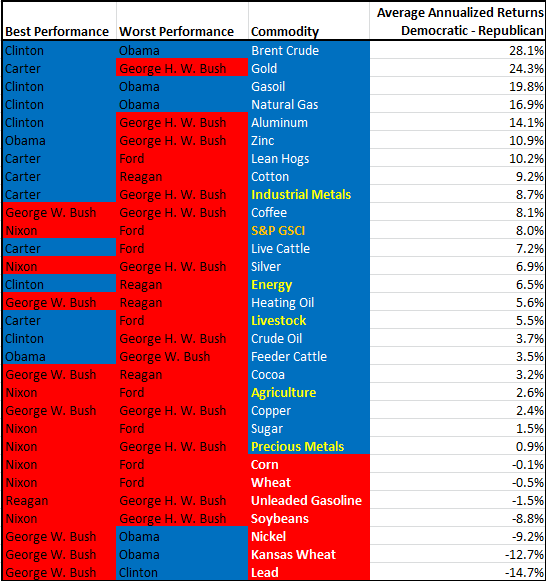