In my last post, I introduced a series called “Weighing In:” that includes comparisons of the effectiveness of the Dow Jones Commodity Index (DJCI) and the S&P GSCI to reach certain portfolio goals.  Although there are a number of reasons investors use commodities, diversification and inflation protection are the two most common.

According to Blu Putnam, Managing Director and Chief Economist, of our partner, CME Group, it may be reasonable to expect inflation later this year or in early 2015.  He states concisely in a video and more in-depth in his paper, “in order for monetary policy to gain traction, the economy must be interest-rate sensitive, and this linkage is missing during a deleveraging period. We believe the US was largely over the deleveraging phase by the end 2012 or early 2013, so as the US economy becomes more interest-rate sensitive, monetary policy with near-zero short-term rates will gain traction. If economist Milton Friedman was right about the long and variable lags in monetary policy, then it is probably appropriate to start the clock at the beginning of 2013, and thus, to expect some inflation pressures 18-24 months later – late 2014 or early 2015.”

Now that we are in the second half of 2014, it may be time to start thinking about commodities as a tool for inflation hedging.  It is natural to guess commodities can be used for inflation protection given the same food and energy that are in the Consumer Price Index (CPI) are in the commodity indices.  However, let’s examine the impact of the composition inside the indices to determine whether the equal sector weighted DJCI or world production weighted S&P GSCI does a better job at protecting against inflation.

Notice in the chart below, the strikingly similar pattern of CPI year-over-year (yoy%), S&P GSCI yoy% and DJCI yoy%. 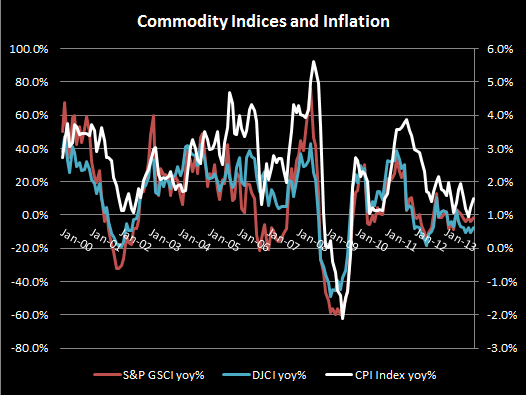 Source: S&P Dow Jones Indices and Bureau of Labor Statistics http://www.bls.gov/cpi/cpi_sup.htm. Data from Jan 2000 to Dec 2013. Past performance is not an indication of future results.

Source: S&P Dow Jones Indices and Bureau of Labor Statistics http://www.bls.gov/cpi/cpi_sup.htm. Data from Jan 1971 to Dec 2013. Past performance is not an indication of future results.

Notice the S&P GSCI increase in inflation beta of the S&P GSCI from 2.8 to 13.0 in the time period that starts in 1971 versus the time period starting in 1987. This increase is directly from the addition of oil into the index and is no surprise since energy is the most volatile component of CPI and energy is used to produce every other commodity. The world production weighting scheme of the S&P GSCI that yields a higher energy weight results in a greater inflation beta than the DJCI, though the inflation betas of over 10.0 from the DJCI are significant.

This also holds true for inflation betas around the world, except in places where the prices are independent of the economy. For example, the Mexican government sets the price of gasoline so returns of commodity indices are not considered an inflation hedge against changes in Mexican CPI. This is shown in the chart below: 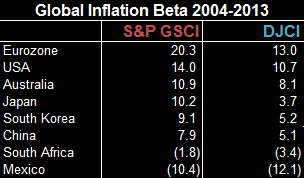 Source: S&P Dow Jones Indices, Bloomberg and Bureau of Labor Statistics http://www.bls.gov/cpi/cpi_sup.htm. Data from Jan 2004 to Dec 2013. Past performance is not an indication of future results.

Overall, from the analysis, both the S&P GSCI and the DJCI are strong inflation protectors. However, the S&P GSCI is a stronger inflation hedging tool given its energy weight.