In March, large caps continued to trend down.  The S&P 500 (TR) lost 2.5% with 8 of 11 sectors losing.  Financials, the second biggest sector with an index weight of nearly 15%, lost the most for the month, -4.3%, positing its worst monthly loss since Jan. 2016.  The tariffs, trade war tensions and falling treasury spreads really hurt the banks.  Information Technology, the biggest sector, lost 3.9% in its worst month since Apr. 2016.  The sector is suffering from the privacy issues brought to the forefront by Facebook’s data privacy scandal.  Real Estate performed best, gaining 3.8% in March, ending its 3 month losing streak, but the sector is under 3% of the index so didn’t have much impact.  Real estate may be positioned well despite rising rates since the rates are still so low. That combined with the accelerating growth could support the sector, so extra exposure through equally weighted strategies or sector rotation may benefit.

The equally weighted indices by definition have greater weight in smaller stocks and have historically done well with rising rates, GDP growth, inflation and a falling dollar.  This is starting to show in the performance of the S&P MidCap 400 (TR) and S&P SmallCap 600 (TR) that both gained in March.  While the S&P MidCap 400 (TR) gained just 93 basis points, the S&P SmallCap 600 (TR) gained over 2.0% that pushed its year-to-date returns into positive territory, up 57 basis points in 2018.  In mid-caps, 9 of 11 sectors were positive, and in small caps, 8 of 11 sectors were positive, which is a relatively rare sector recovery, happening in less than 10% of the time.  The last time a rebound for mid-cap sectors that big happened was in Oct. 2014 and for small-caps in Nov. 2016.

Again, as a reminder, here’s what February looked like in one chart: 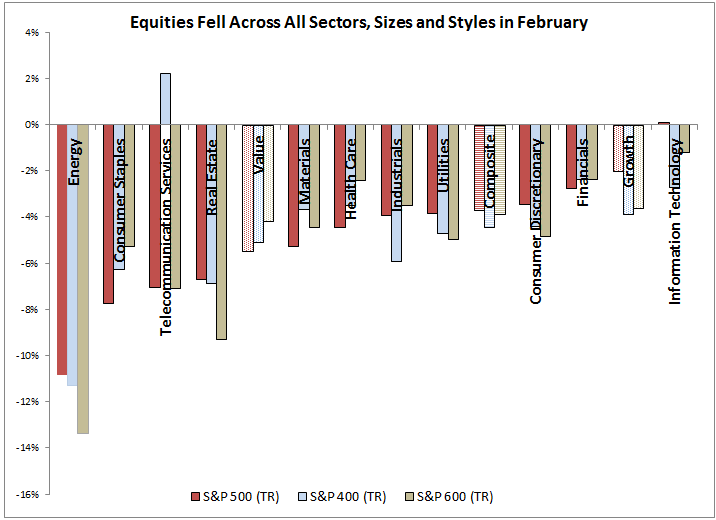 Notice how well mid-caps and small -caps rebounded in March despite the continued weakness is large-caps. 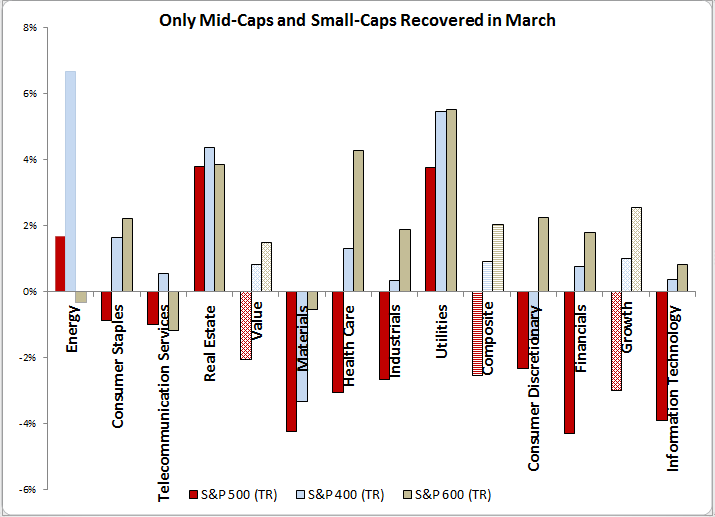 Health Care posted the biggest small-cap premium with a 7.3% outperformance in March, explained in detail here.  Financials and Tech also had significant small cap premiums in March of 6.1% and 4.7%, which will be analyzed in subsequent posts.