The Odds Are Against You

The Odds Are Against You

S&P Dow Jones Indices’ SPIVA (S&P Index Versus Active) scorecard, first published in 2002, has become our industry’s de facto scorekeeper of the relative performance of active managers. We recently released the U.S. SPIVA results for 2021. Nothing in the 2021 report was surprising, as most active managers continued to underperform benchmarks appropriate to their investment style. Some observations, however, are worth highlighting:

Despite some idiosyncrasies, the most important thing about 2021’s SPIVA results is what they share with the prior 20 years’ reports. SPIVA data extend to 2001; in 21 years, a majority of large-capitalization active managers outperformed the S&P 500 only three times. In 18 years out of 21, most large-cap managers lagged the benchmark. This is not an accident or a coincidence; active managers underperform for identifiable, robust, and sustainable reasons. Investors considering the use of active management should realize that the odds are against them.

The S&P Multi-Asset Dynamic Inflation Strategy Index was launched in 2021 to offer a more dynamic, rotational approach to integrating inflation hedging than the typical static 5%-10% allocation to commodities. The index dynamically weights asset class constituents monthly based on the underlying inflation regime represented by the latest monthly U.S. Consumer Price Index (CPI) reading.1 In 2022, the index has outperformed most major asset classes, as can be seen in Exhibit 1. With the highest inflation readings in decades, it may make sense for industry participants to look to assets that have performed well in high inflation environments historically. 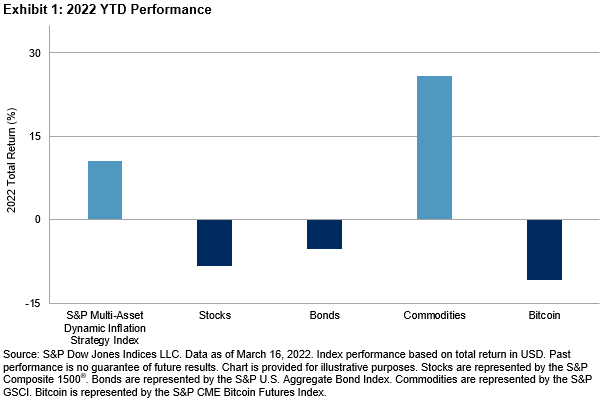 Why did the S&P Multi-Asset Dynamic Inflation Strategy Index display double-digit positive performance in 2022? The answer lies in the current constituent percentage weights. In a high-inflation environment, it’s possible that inflation-sensitive asset classes with high inflation beta could offer a way to combat high and rising inflation. Exhibit 2 illustrates the weighting of the index over time with the U.S. CPI readings overlaying it. As of Feb. 28, 2022, the index weight was over 50% commodities (in yellow), allowing it to perform well in this environment. Recent inflation readings are some of the highest we’ve seen in the modern era. Based on its back-tested history, the index would’ve spent much of its time in a 60/40 equity/bond weight in the 2010s, as we had many years of low inflation during that time. This allowed it to perform well over time regardless of the inflation regime. 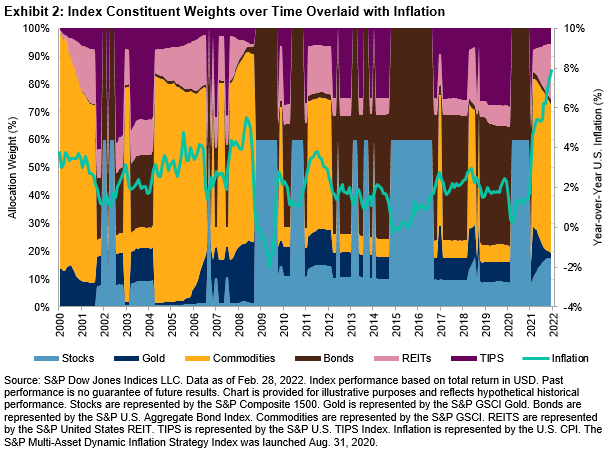 Where do we go from here? With the Fed hiking rates on March 16, 2022, by 25 bps, time will tell if this effort cools prices or not. Geopolitical conflicts and lagging pandemic supply chain issues have been playing major roles in this high inflation backdrop and might continue to be a factor in the future. The Fed believes inflation could be high until the middle of 2022. Some economists are adjusting their inflation forecasts and expecting transitory scenarios to play out over the short term in some areas of the global economy. The ability of the index to adjust to different inflation regimes has historically offered impressive results, albeit during the short two-decade back-tested history. Correlations of changes in the index performance to changes in inflation over the past five years were positive compared with less dynamic market exposures as can be seen in Exhibit 3.

The S&P Multi-Asset Dynamic Inflation Strategy is designed to offer a researched, rules-based benchmark to navigate this high inflation time in a favorable risk-adjusted way. For a deeper dive into the index, check our Fiona Boal and Lalit Ponnala’s paper here.

1 For more detailed information on the objective of the index, read this blog from Fiona Boal.

The Federal Open Market Committee voted to raise the Federal Funds rate by 25 bps on March 16, 2022. This move was well telegraphed and not at all surprising—but that doesn’t mean that we won’t hear concerns about how rising rates will impact equity returns. Finance theory teaches us that, other things equal, rising interest rates are not good for the performance of stocks, as rising borrowing costs and higher discount rates tends to translate to lower future performance. For the much of history, empirical evidence has aligned with the theory. But in more recent data, we have noticed that “other things” may not have always been equal.

At a cursory glance, rising rates have not necessarily boded ill for equity performance, at least in the period from 1991 through 2021. There were eight episodes when the 10-Year U.S. Treasury yield rose. The S&P 500® declined in none of these; in two cases equities were flat, and the S&P 500 rose in six, in some instances quite substantially. 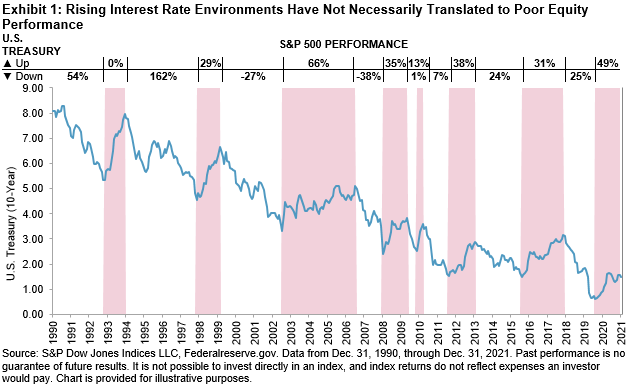 We can also look at these months graphically in the scatter plot in Exhibit 3. Here we plot the change in the 10-Year U.S. Treasury yield against the performance of the S&P 500 for the same period from 1990 through 2021. Each point represents a monthly observation, and we see no discernible relationship. The blob speaks for itself—or rather, it doesn’t. History does not provide evidence of a clear link between changes in interest rates and changes in the equity market. 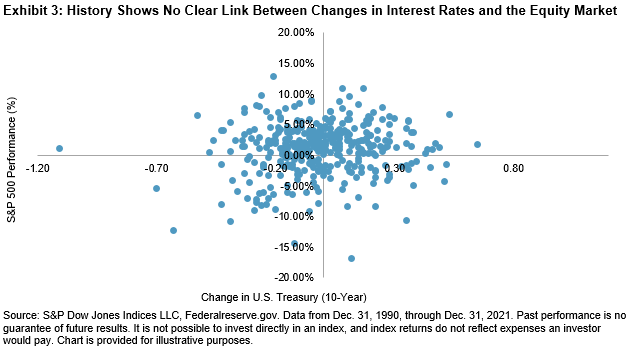 The Russia-Ukraine conflict is now in its third week and markets remain volatile. The major U.S. equity benchmarks dropped about 10% from their peaks, with the exception of the Energy sector. The CBOE Volatility Index (VIX®), the so-called “fear gauge,” has been hovering above 30, which is the 90th percentile of its historical value. Its level on March 10, 2022, was more than two standard deviations above its one-year average. Although it remains unclear how long these geopolitical tensions will last and how much it will affect the global economy, the U.S. equity market has managed to avoid the VIX levels seen two years ago, which were triggered by pandemic-driven sell-offs.

More importantly, historical data show that the equity markets tend to bounce back quickly after elevated volatility. We look at all the trading days on which VIX hit above 30 and calculate the S&P 500® performance in the subsequent 6 months and 12 months. The scatter charts in Exhibit 2 show that the vast majority of these 557 days were followed by positive performance in the next 6 months (82%) and 12 months (88%). 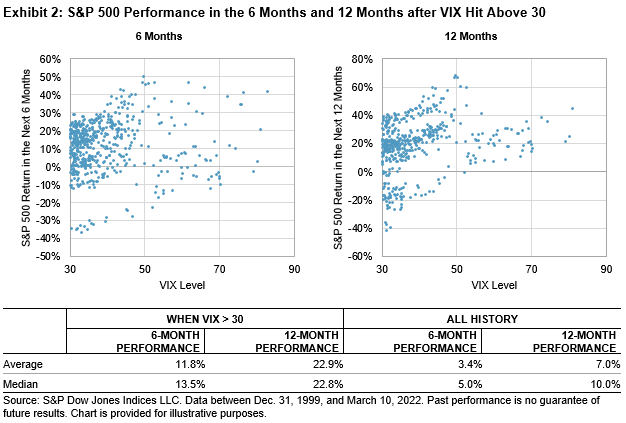 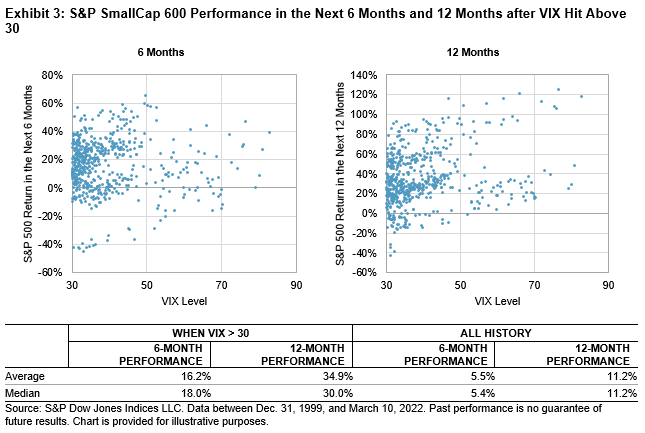 Though passive investing is galloping its way into some allocations, it’s still not a significant percentage. Passive assets are concentrated in the developed markets, with the U.S. claiming a majority share, followed by Europe and Japan.

The use of core and satellite strategies based on passive vehicles can be a further catalyst to the growth in using indexing to attain investment objectives. Indexing—whose benefits can include low cost, diversification, flexibility, and transparency—offer a simple solution to gain exposure to a broad spectrum of investment strategies. The core satellite strategy is useful not only for active versus passive allocation but can be used tactically to allocate among indexing areas, diversifying within asset classes, geographies, or themes.

Indian investors tend to have had a firm home bias, which has not changed over the last few decades. The pandemic shifted those dynamics, as the benefit of international diversification became evident. The assets in international schemes grew from INR 9,062 crores to INR 24,129 crores, a growth of 166%.1 While U.S. markets led the interest, allocations to emerging markets were also made. In 2021, the Securities and Exchange Board of India revised its limits to permit USD 1 billion per mutual fund, with a total cap of USD 7 billion for the industry. However, the industry has reached those limits and is now seeking a revision for them, as interest and assets are flowing into this segment.

The growth in assets, products, and investor interest compels passive product providers to offer a wider selection that covers diverse needs. In addition to country exposures, the demand has moved to broadening the scope beyond beta exposures. In addition to its broad offerings, S&P DJI has some more index series, such as the following.

The above indices reflect the change in interests and aligning to the new market demand for strategies.