The Case for Equal Weight Indexing 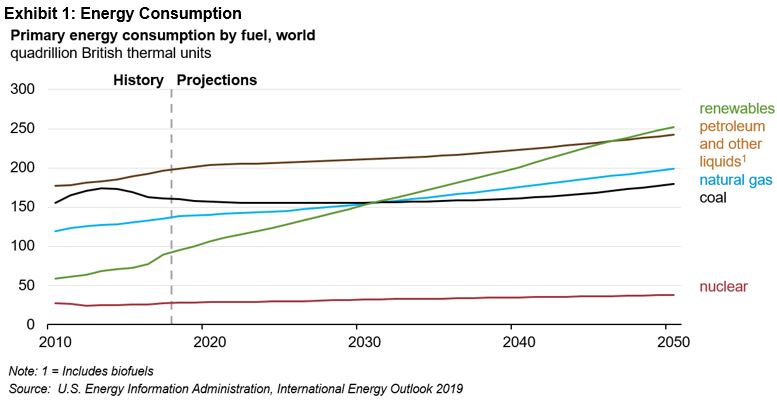 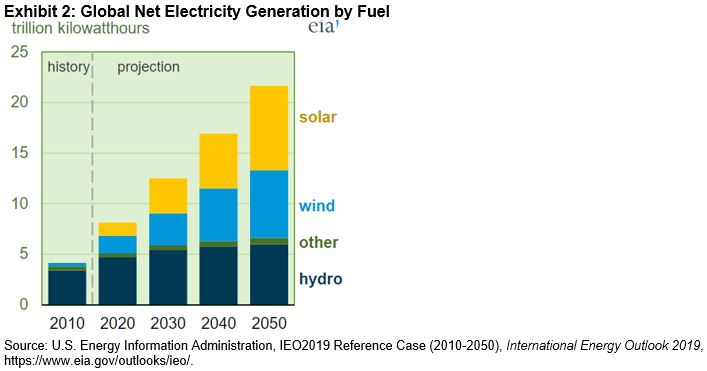 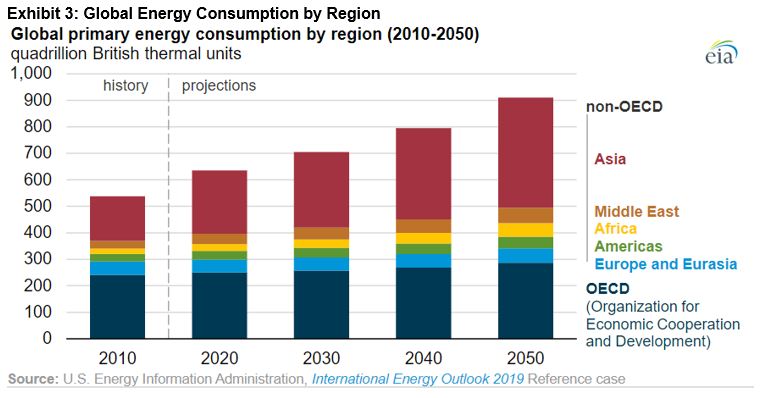 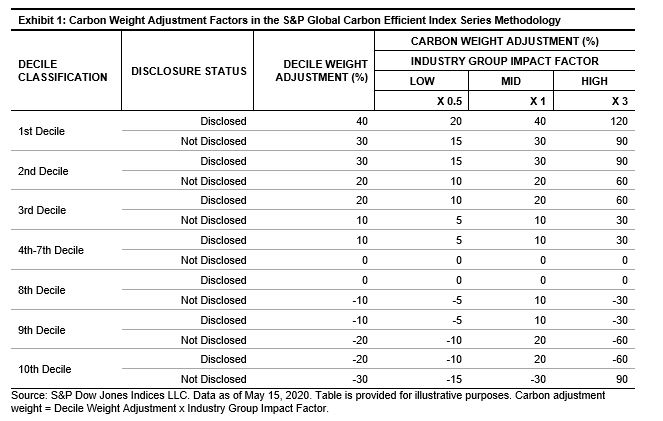 The headline S&P GSCI rose 4.9% in January, as the industrial portion of the global economy continued to bounce back from the first wave of the COVID-19 pandemic and lockdowns in 2020, and the prices of many agricultural commodities spiked higher on the back of record demand from Asia and the growing risk of grain export restrictions.

The petroleum complex sustained its impressive recovery in January. The S&P GSCI Petroleum rallied 7.3% for the month. While there has been some moderation to the pace of the demand rebound due to a slower start to COVID-19 vaccinations in many regions and the cautious pace of reopening, the oil market remained tight, with Saudi Arabia pledging additional, voluntary production cuts and other OPEC+ producers holding production steady. Policy shifts in the U.S. are also expected to temper long-term oil supply prospects.

After a strong 2020 for the S&P GSCI Industrial Metals, performance in January was a paltry 0.4%. Heavyweights Aluminum and Copper were little changed, while the S&P GSCI Nickel rose 6.4% and the S&P GSCI Zinc fell by almost the same amount. Demand for nickel use in electric vehicles was front of mind for market participants, while zinc fell due to an unexpected surge in stock to a three-year high in the London Metal Exchange warehouses.

The S&P GSCI Gold fell 2.6% in January after a stellar 2020, when it posted an all-time high. Consolidation has been a trend for the yellow metal over the past few months. The S&P GSCI Silver rebounded on the last day of the month by almost 4% to post a monthly gain of 1.9%. With the intensified push toward green technology, silver demand for solar and electric vehicles provided the impotence for price appreciation while the “poor man’s gold” also attracted the attention of Reddit retail investors. The S&P GSCI Palladium fell 10.0% in January after a 4.9% fall on the last day of the month. Palladium has been riding high over the past five years with the global shift to lower carbon emitting autos and booming demand. Palladium is used in the catalytic convertors for gasoline powered autos.

The S&P GSCI Corn ended the month up an impressive 13.0%. On the last day of the month, the USDA confirmed that China booked 2.1 million metric tons of U.S. corn, the largest-ever single sale to the Asian country. That brought China’s four-day buying total to 5.85 million metric tons, more corn than the U.S. has ever shipped to China in an entire marketing year. Across the rest of the agriculture complex, only the S&P GSCI Coffee and S&P GSCI Cocoa finished the month in negative territory.

It was a quiet start to the year for livestock. The S&P GSCI Livestock rose 0.9%, with lean hogs and live cattle prices both benefiting from the rally in the grains market.

The Case for Equal Weight Indexing

2020 witnessed outperformance from some of the largest S&P 500® companies as investors expected these firms to be better placed to navigate the COVID-19 environment. Exhibit 1 shows that this outperformance led to the largest names accounting for an unusually high proportion of the U.S. large-cap equity benchmark, and therefore having a bigger impact on the index’s returns. For investors looking to gain large-cap exposure with lower sensitivity to the biggest names, and potentially to take advantage of reductions in market concentration, Equal Weight may be worth considering.

Launched in January 2003, the S&P 500 Equal Weight Index weights each S&P 500 company equally at each quarterly rebalance. Exhibit 2 shows the historical benefit from applying this weighting scheme within U.S. large caps; the S&P 500 Equal Weight outperformed since its launch as well as over its lengthier, back-tested history. Rather than being strictly a U.S. phenomenon, the outperformance in Equal Weight indices has been observed globally, including in Japan. 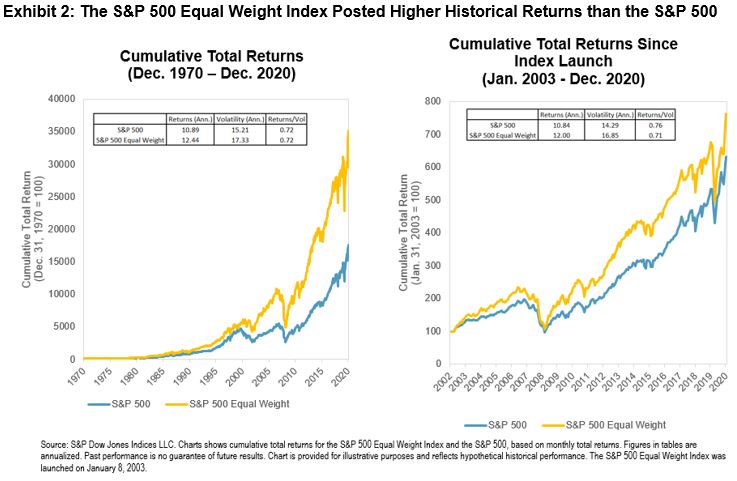 One of the key perspectives in explaining equal weight indices’ returns is their smaller size exposure: for example, over 50% of the historical variation in the S&P 500 Equal Weight Index’s relative returns is explained by size.  This exposure occurs because, as Exhibit 3 illustrates, the distribution of weights within equal weight indices is far more even than within their market-cap weighted parents. For example, the S&P 500 Equal Weight Index is far less sensitive to the performance of the largest names in the market and offers more exposure to smaller S&P 500 companies. 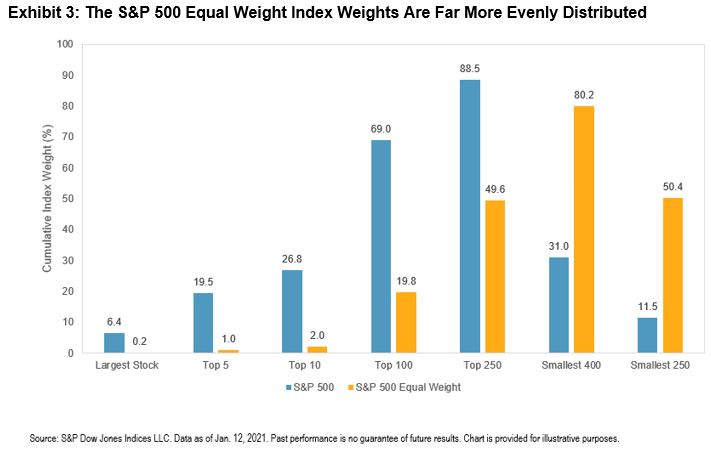 Exhibit 4 shows that this dynamic is exactly what has been observed historically. The S&P 500 Equal Weight Index’s cumulative relative total return versus the S&P 500 typically rose (fell) as concentration, measured by the cumulative weight of the largest five S&P 500 companies, fell (rose). This dynamic includes December 2020, when Equal Weight outperformed and concentration declined as the beginning of vaccine rollouts particularly benefited smaller companies that had been more impacted by the “COVID correction” last year. 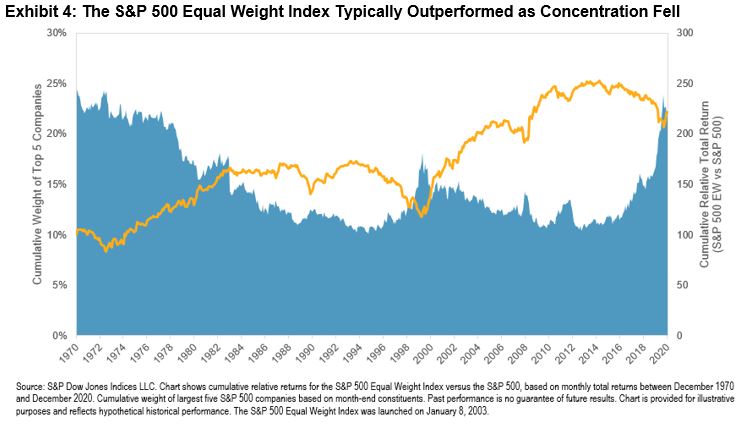 The current market environment may present an opportunity for investors to consider Equal Weight in order to diversify away from some of the largest market constituents. The S&P 500 Equal Weight Index’s smaller size bias may also benefit investors anticipating reductions in market concentration.