Human capital, physical capital, and technology have been widely recognized as a fundamental source of economic growth.[1] Dating back to the 1960s and early 1970s, when we saw a rapid increase in educated workers, facilities, and technological catch-up, Japan’s “economic miracle” emerged along with impressive GDP and per capita output growth.[2] Nowadays, these factors are the core of many countries’ policies to power their economies, including Abenomics’ three arrows. Consequently, one may infer that companies investing in capital expenditure (CAPEX), R&D, and human capital at a higher speed are more likely to generate long-term growth.

For investors, however, looking at the growth of investment in the three drivers alone is not enough. On the corporate level, companies should simultaneously be able to boost labor productivity, increase profitability, and generate returns out of those inputs. In this sense, efficiency is the key to linking these three economic drivers to investors.

The JPX/S&P CAPEX & Human Capital Index is designed to track companies that not only proactively investing in human capital, physical capital, and R&D, but also can demonstrate efficient use of those investments. The index selects the 200 companies with highest composite CAPEX and human capital scores from TOPIX constituents after passing liquidity, creditworthiness, profitability, and beta filters.[3] 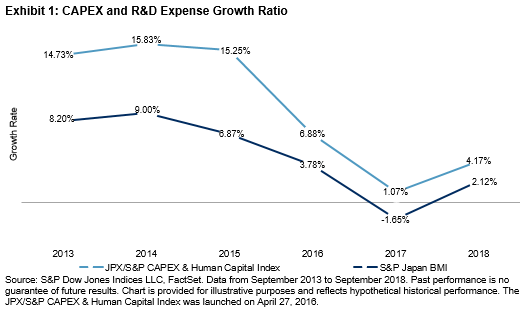 Meanwhile, it is crucial for a company to be financially disciplined and undertake worthwhile projects to avoid the pitfall of overinvesting and “empire-building.”[1] The index measures investment efficiency by allocating more weight to companies with a high ratio of revenue to three-year cumulative CAPEX (see Exhibit 2). 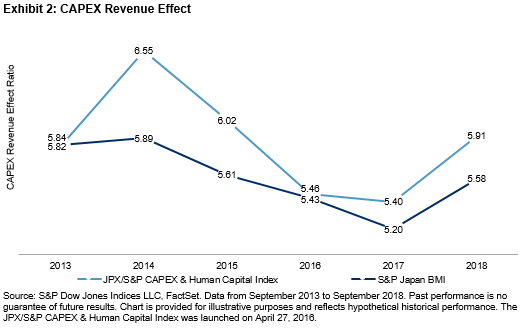 The JPX/S&P CAPEX & Human Capital Index utilizes RobecoSAM’s Corporate Sustainability Assessment (CSA) to evaluate three people-related areas: human capital development, talent attraction and retention, and gender equality and human rights. These areas focus on quality activities that can increase productivity, such as employee training, career planning, and equality and respect in the workplace, rather than merely counting the salaries paid to employees as a human capital investment.

The RobecoSAM CSA emphasizes the efficiency of human capital investment by giving a higher score to companies that are able to:

Additionally, companies promoting gender equality are likely to rank higher, and ways they can promote this include having a larger female share of the total workforce and working to lower the wage difference between female and male employees.

In the long run, it is reasonable to believe that companies committed to cultivating, promoting, and protecting their employees could experience higher labor productivity, which in turn, can drive better stock performance. 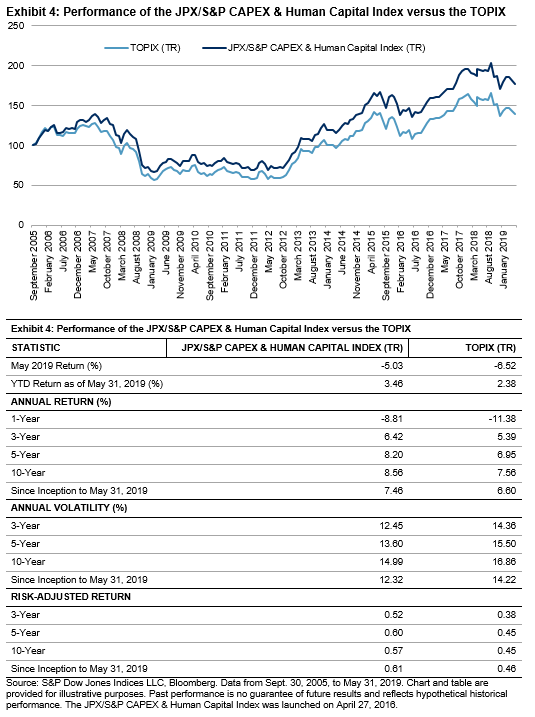 May was categorized by the return of macro fears.  Many equities indices and fixed income indicators flashed red – and the S&P 500’s four month win streak ended – as investors grappled with trade tensions and the potential impact on global growth.  Adding to investors’ uncertainty, President Trump’s surprise month-end announcement of tariffs on Mexican goods raised fears that besides China, the U.S. may target other countries with which it has a large trade deficit, especially Japan and Germany (see Exhibit 1).

The perceived prospect of tariff contagion weighed on Japanese and German equities last month – the S&P Japan BMI (-6.5%) and the S&P Germany BMI (-5.6%) both fell in local currency terms.  Against that background, we look at the potential impact of auto tariffs on car manufacturers in both countries.  In Exhibit 2, we approximate that impact by comparing the U.S. revenue exposure of the Japanese and German Automobiles and Components industry groups. 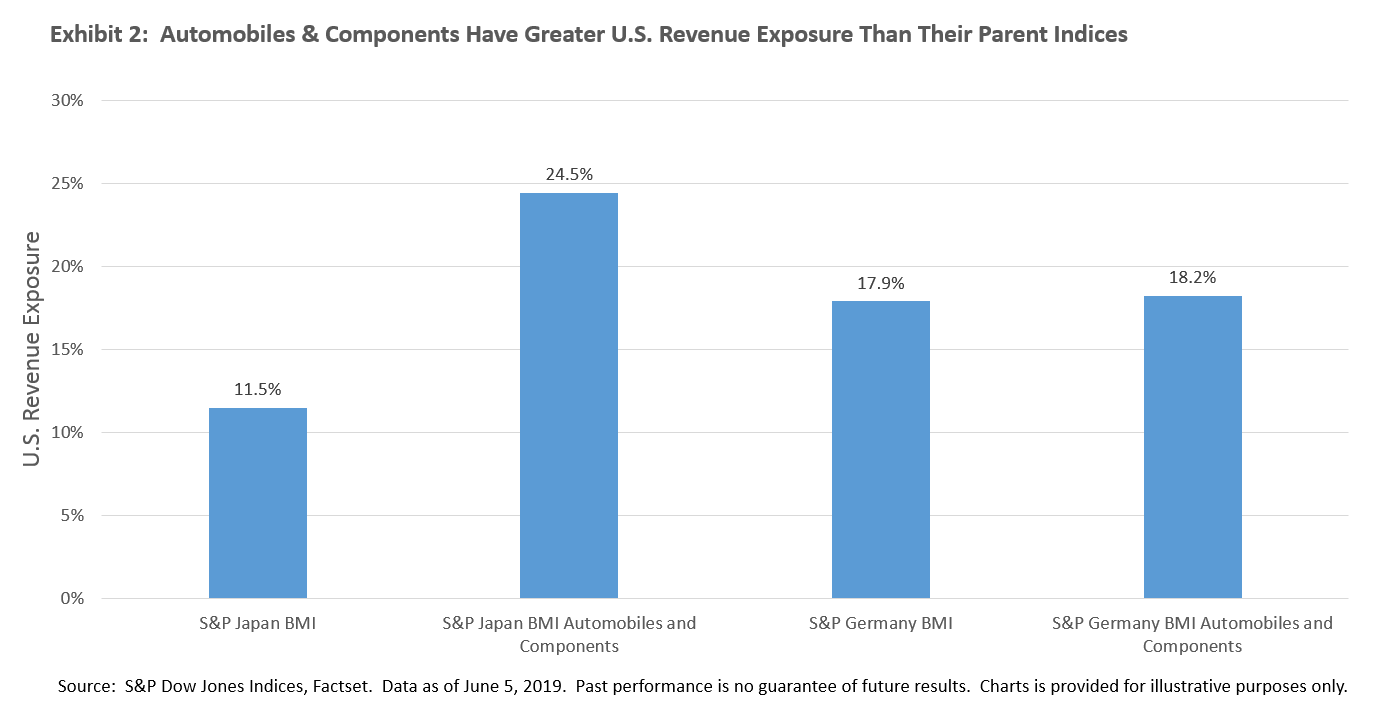 As with our previous studies on Brexit, the USMCA trade deal, and the 2016 U.S. Presidential election, understanding the geographic revenue exposures of various market segments can help to explain market performance.  And should the recent flashes of red on many of our dashboards persist due to trade tensions, geographic revenue data may become even more important in offering market insights. 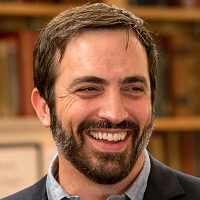 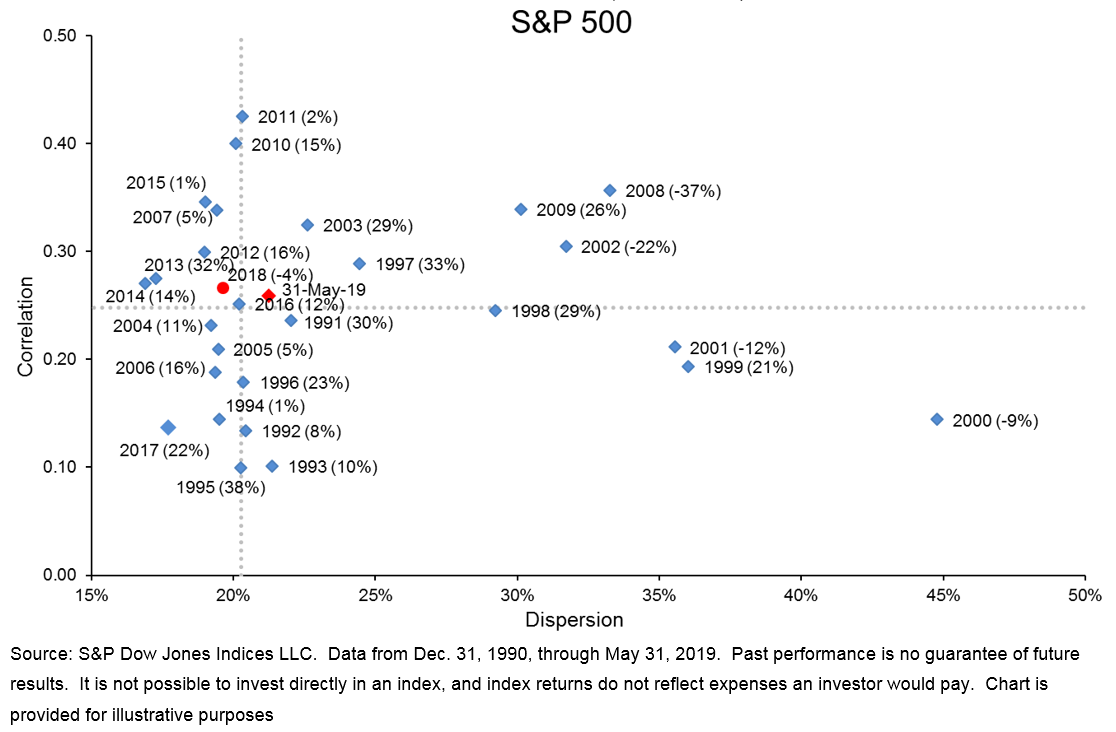 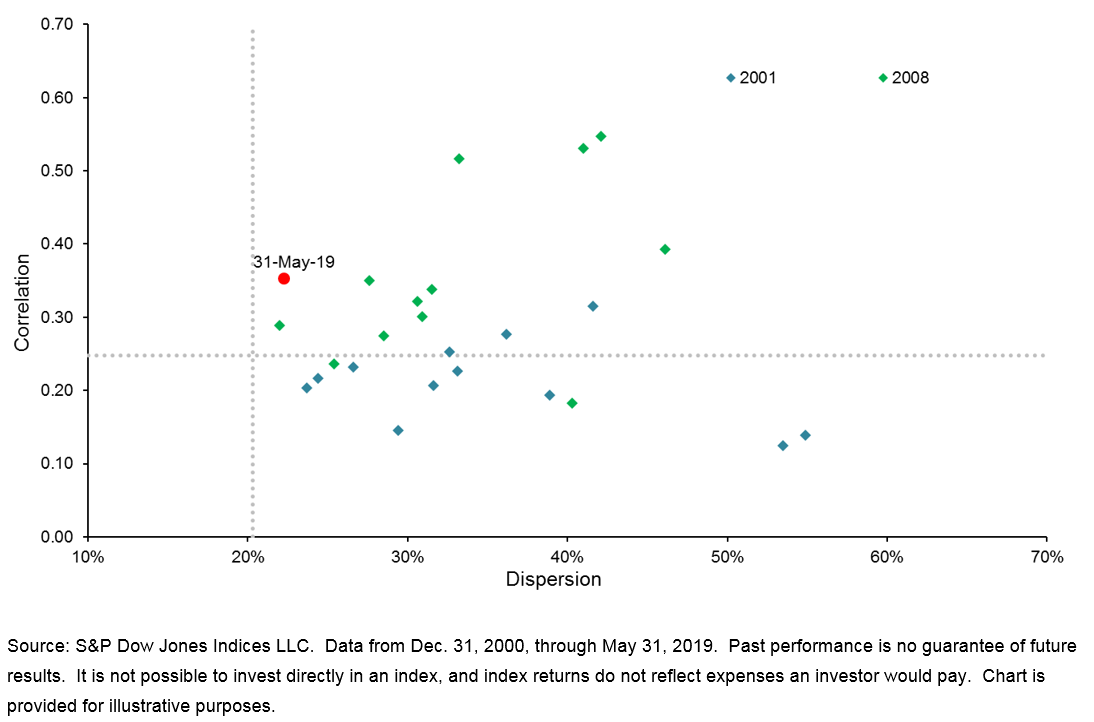