Coming into month-end, and as the street prepares its monthly summaries, (all figures are as of May 29th), the S&P 500 looks set to complete the month with a loss of around 5%.  So, what went wrong?  Global markets started the year very positively: the S&P 500 was up 18% by the end of April, while the S&P Global BMI had gained 16%.  Yet, the adage to “Sell in May and go away” looks to have been prescient advice this year.  Macro themes have returned, driving a wide spread in sector, factor, and country performances; volatility has also returned … although not as significantly as you might think.

The ongoing trade dispute between China and the United States provided the dominant theme in May, as both sides dug in their heels and prepared for a prolonged battle – creating uncertainty in both the investor and business communities.  Bond markets in particular demonstrated the flight to safety, as the 10-Year U.S. Treasury yield hit a twenty-month low, closing at 2.24%, and the 10-Year German Bund yield dropped to -0.18%.  Further, despite the U.S. economy growing 3.2% in Q1, the inversion in the U.S. yield curve continued to strengthen, stirring fears of recession.  While the current backdrop of economic strength seems like an unlikely environment for additional monetary stimulus, some believe there will be a rate cut from the U.S. Federal Reserve later this year – which added to the degree of inversion in the belly of the curve. 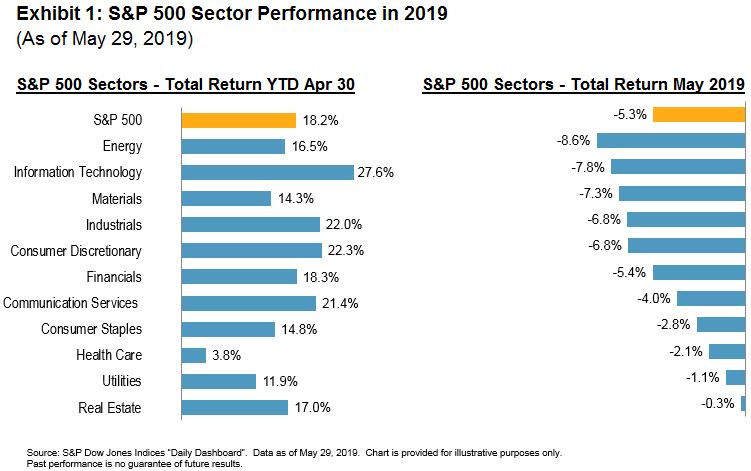 As was the case in sectors, defensive factors came back in vogue, with Low Volatility leading the way and High Beta bringing up the rear.  Momentum outperformed, which sounds counterintuitive but actually makes sense when you consider the timing of the mid-March rebalance for the index, when defensive constituents boasted market-beating one-year trailing returns. 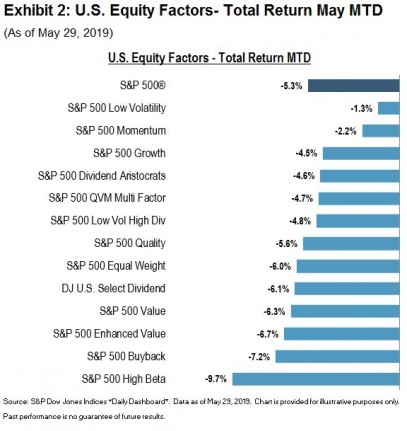 In aggregate, markets included in the S&P Developed BMI outperformed those in the S&P Emerging BMI, but single-country performances were particularly dispersed.  Unsurprisingly, given the trade uncertainties, China struggled, with the S&P China BMI declining 12%.  Indian equities rebounded following the confirmation that Prime Minister Modi would get a second term, gaining 0.3% and outperforming all other Emerging Market country equity markets except for Russia and Greece, which gained 2% and 1%, respectively.  Frontier market Argentina beat them all, gaining 15% (all figures in USD terms). 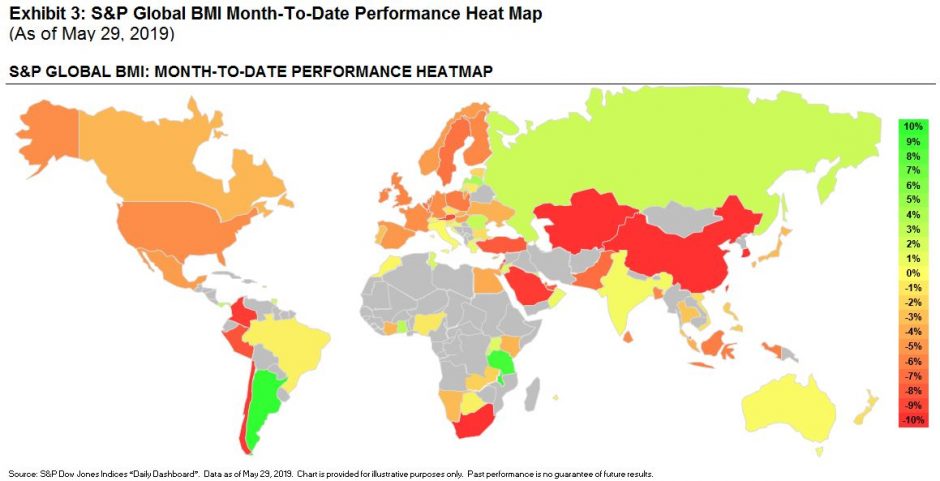 Volatility … or a lack thereof

VIX® closed last night at 17.90, higher than it has been recently but not high by historical standards.  Given the perceived panic of trade concerns, it feels surprising that VIX isn’t higher.  One perspective is that the divergence in the performance among market segments has improved the level of diversification in the S&P 500; or it could be that – despite the cruelty of May – market participants think we’ll weather the storm and get back to growth in June.

Request to sign up for our daily market commentary by emailing chris.bennett@spglobal.com

Tagged:
Chris Bennett, factors, fixed income, US Equities, yield curve
The posts on this blog are opinions, not advice. Please read our disclaimers.