(“Excess Return” does not mean any additional return on the ETF’ s performance) is a footnote in an ETF provider’s investment objective about an ETF that tracks the S&P GSCI Crude Oil Excess Return.  That disclaimer is true but never explains what excess return means in terms of additional performance.  After all, excess means more, and more return is good OR is anything in excess likely to be bad? 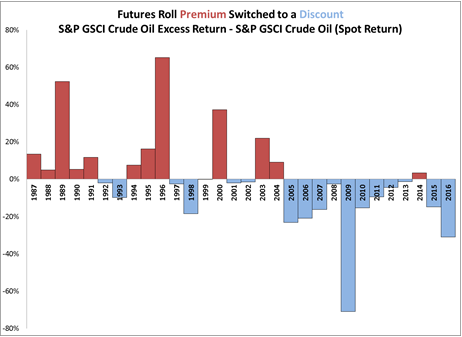 Shortages were prevalent before 1991, causing a premium on the futures contracts with nearby expiration dates.  This is since processors are willing to pay extra to have immediate access to a commodity during a shortage. For example, a refiner is likely to pay a premium to have oil when there is a shortage so that its production of gas is not disrupted. The chart below shows the less inventory available, the more one will pay for the convenience of owning the commodity. 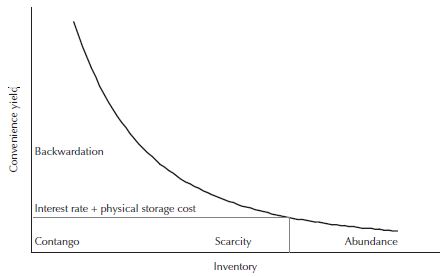 Source: “The Long and Short of Commodity Index Investing”, by Jodie Gunzberg and Paul Kaplan, Intelligent Commodity Investing, edited by Hilary Till and Joe Eagleeye 2007.

In response to a world in fear of running out of resources, producers raced to supply commodities they thought the market needed. Inventories grew into excess circa 2005 just before the global financial crisis dried up demand.  The reality of an ending Chinese super-cycle in the face of an oil supply war, together with a range of unfavorable macro factors like a strong U.S. dollar, low interest rates, low inflation, and low growth plagued the last decade for commodities. This left an abundance of oil driving the excess return to be negative, the condition that still holds today.

In response to the negative excess returns, a myriad of new indices emerged to modify contract selections and rolling strategies to reduce the loss. One of the early but still popular strategies is called “enhanced”. The S&P GSCI Crude Oil Enhanced Excess Return selects whether to hold the nearby most liquid contract, or the later-dated December contracts (of the current year (Jan-Jun) or next year (Jul-Dec)) based on the amount of contango (or excess inventory leading to negative excess return) and rolls in the 1st-5th business days of every month, rather than the typical 5th-9th. 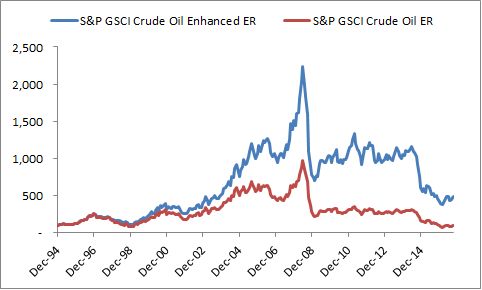 The crude oil positive and excess return negative is the condition now that is underlying the S&P GSCI Crude Oil Enhanced ER underperformance.  How long might that last is the next question investors want to know. Historically, there have been five major periods of this condition lasting on average 13.8 months with the shortest period lasting 5 months and the longest lasting 34 months. 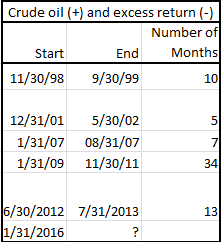 After 9 months since the bottom of oil and a persistent abundance, the tide might be turning. The excess return is the smallest negative it has been at since July 2015, and is now just under 1%. The outcome of OPEC’s effort to cut production and the ability of non-OPEC to keep supplies low will impact how long this recovery takes. The key risks are that OPEC’s cuts are too little too late – or they don’t agree on a production cut at all, and China may increase oil imports more before the price rises even higher  – that will reduce demand later and possibly extend recovery time, especially if they start exporting more to turn a profit. Also, US inventories need to decline, the weather needs to get cold, China’s growth needs to pick up to help the oil market rebalance.

One thought on “Crude Reality of Enhanced and Excess Returns”