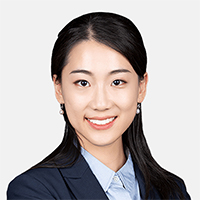 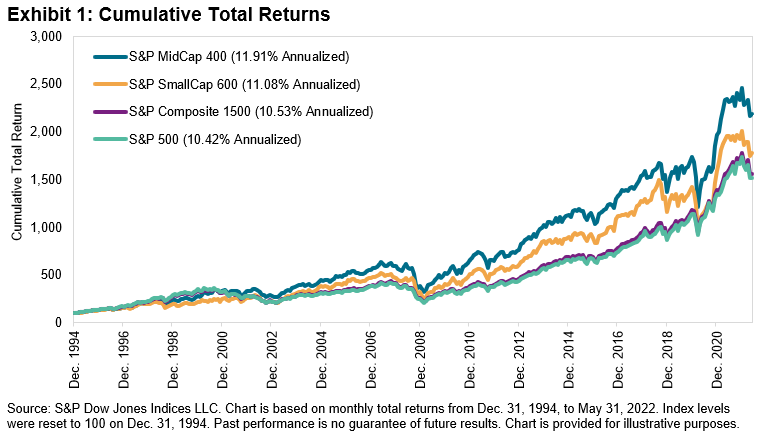 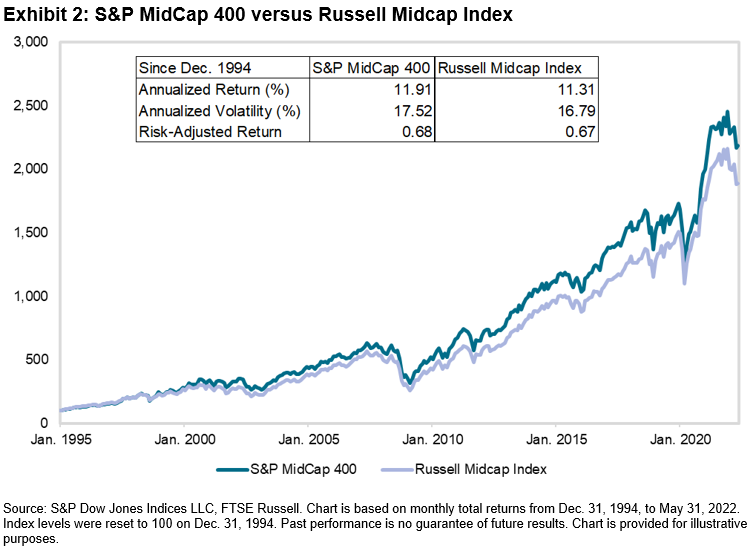 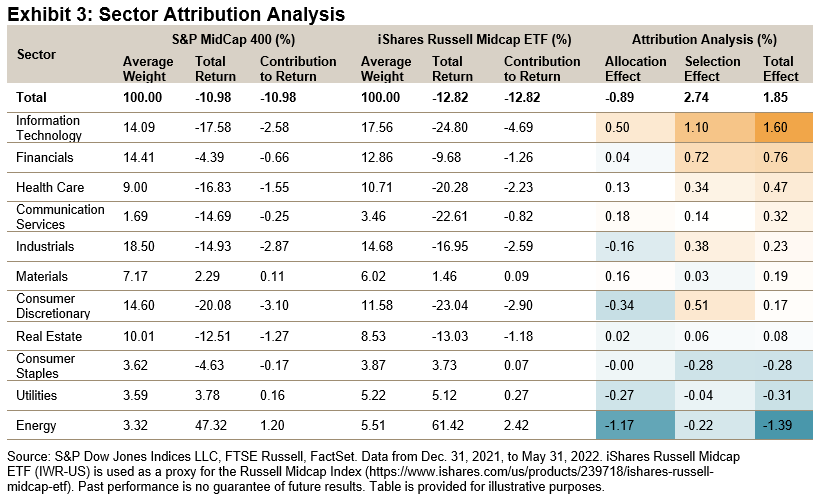 Get to know the S&P Kensho New Economy Indices, a comprehensive, rules-based, thematic index framework powered by AI and designed to help investors better understand and precisely measure the long-term transformative trends and exponential innovation and growth of the sectors and industries driving the Fourth Industrial Revolution.

Record inflation prints, export embargos and import bans helped the S&P GSCI, the broad commodities benchmark, to post another monthly gain in May, ending the month up 5.1% and bringing its YTD performance to 47.0%. The ongoing disruptions to the flow of energy and agricultural commodities out of Ukraine and Russia pushed energy and grain markets higher, while the metals markets continued to be weighed down by the prospect of higher interest rates and fears of global economic slowdown.

Energy prices extended their bull run into the end of May after the EU agreed to a partial ban on Russian oil and China decided to lift some coronavirus restrictions. EU leaders agreed in principle to cut 90% of oil imports from Russia by the end of 2022, equivalent to around 1.5 million barrels per day. Russian crude oil exports that have traditionally been destined for the EU will not necessarily be lost to the global market, but even if it can find willing buyers, it will be a challenge to transport the oil to new markets and prices will be discounted. The S&P GSCI Petroleum ended the month 9.8% higher. Targeting Russian natural gas supplies may be the EU’s next diplomatic battleground in the economic war, and U.S. natural gas prices are increasingly pricing in this scenario. The S&P GSCI Natural Gas rallied 11.3% in May and 129.3% YTD.

Industrial metals prices fell again in May. The S&P GSCI Nickel took the biggest hit, down 10.7%. Despite tight nickel supply around the world, recent pandemic hits to demand out of China have pushed prices lower, as the market continues to recalibrate from the unprecedented price spike and associated disruptions in March. Nornickel, the world’s largest refined nickel producer, announced during the month that it expects a mild surplus this year after deficits in prior years.

Gold and silver’s lackluster year continued with both precious metals falling in May. The U.S. dollar reached another 20-year high, pressuring precious metals. After some strength earlier in the year, the S&P GSCI Precious Metals ended May flat YTD.

A growing concern among central bankers and others regarding food security serves to highlight the importance of agricultural commodities to the global economy from both a societal and environmental perspective. The war in Ukraine has disrupted global food supplies to an unprecedented degree. A prime example is the tightening global wheat supply picture. Ukraine is considered Europe’s breadbasket and roughly one-third of global exports of wheat come from Ukraine and Russia. Severe restrictions on wheat exports from this region combined with worsening harvest prospects in China, parts of Europe and the U.S., as well as an export ban by major producer India, have tightened stocks and exacerbated global food supply concerns. As a result, global wheat prices have skyrocketed; the S&P GSCI Wheat was up 3.1% in May and 39.2% YTD.

In contrast to the agriculture commodity sector, the livestock markets were benign in May, with the S&P GSCI Livestock ending the month down 1.7%.

In 1993, the Chicago Board Options Exchange (Cboe) announced the launch of the Cboe Market Volatility Index or VIX®, which provides market participants with a barometer to measure market sentiment. Since then, the index has become one of the most followed benchmarks. In commemoration for its 29th anniversary, we take a look at the evolution of the index.

The VIX concept arises from the research of Menachem Brenner and Dan Galai in 1989. They believed that the so-called Sigma index “would play the same role as the market index plays for options and futures on the index.”1 Professor Robert E. Whaley then designed the first version of VIX based on the Black-Scholes model, using at-the-money S&P 100 options.2

In 2003, Cboe revised the VIX methodology with the help of Goldman Sachs.3 The revised VIX now uses a more robust model that captures options of all strikes and the most liquid index option in the market, S&P 500® options. The index name became the Cboe Volatility Index, or VIX. 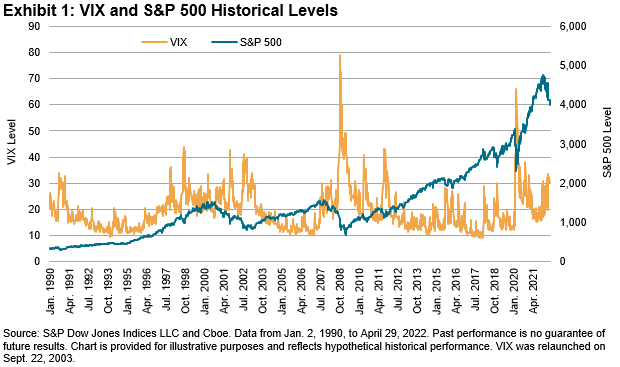 With nearly three decades of history, VIX exhibits a few time-honored characteristics. In the long run, VIX has shown a clear mean-reverting trend. For most of the time, it ranges between 13 (~20th percentile) and 25 (~80th percentile), with a mean of ~19.5 and a median of ~17.5. In the first four months of 2022, we’ve seen VIX hovering above 25 or even 30 (~90th percentile), indicating the elevated risk and anxiety in the financial market. 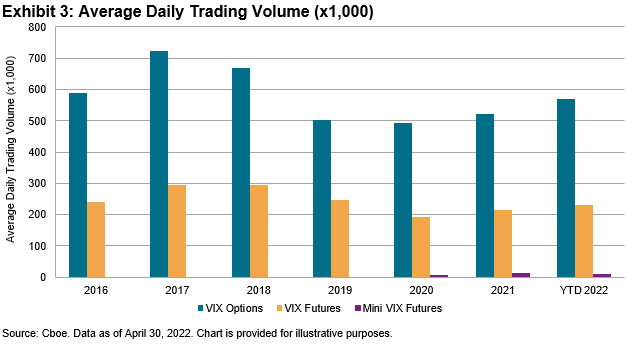 In January 2009, the first suite of tradable VIX futures indices were launched in response to increasing demand for effective hedging tools for broad equity market risk. The S&P 500 VIX Short-Term Futures Index has since grown into one of the most actively followed indices for equity and volatility traders.

VIX and VIX futures indices are still new compared with other broad market measures such as the S&P 500 and the Dow Jones Industrial Average®. However, their negative correlation with the U.S. equities market and hedging capabilities indicate that their popularity among investors could continue for decades to come. 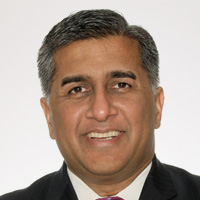 As of year-end 2021, insurance companies held USD 45.4 billion in ETFs in their general accounts—a 15% increase over 2020. We recently published a research piece on the use of ETFs by insurance companies. In this blog post, we explore the increased use of fixed income ETFs in these portfolios. 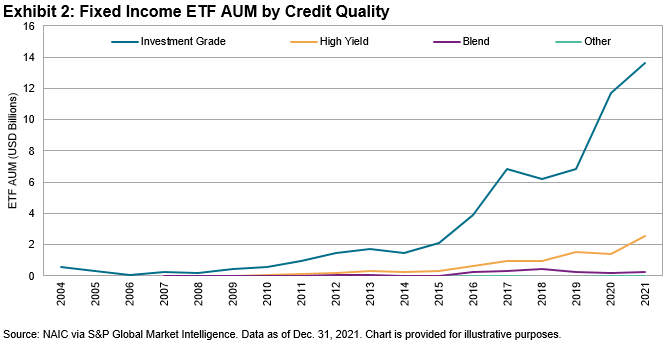 Given the size of the insurance fixed income pool, we continue to monitor this activity for future growth.