The last few weeks have definitely felt like a “where were you when…?” moment as coronavirus fears spread around the world and many people’s day-to-day lives have been disrupted.  Amid the anxiety and disruption, global financial markets nosedived, sending all major equity indices tumbling, VIX® soaring to levels not seen since the financial crisis, and yields on U.S. Treasuries falling to record lows.

Highlighting just how long it feels since the S&P 500® notched its latest all-time high closing price level on February 19th, the benchmark officially entered correction territory – measured by a 10% decline from its recent high – at breathtaking pace (6 trading days) towards the end of February.  Precipitous falls this month – the 9.51% plunge on March 12th represented the index’s worst daily return since Black Monday in 1987 – then cemented the end of the longest bull market in history:  bull markets don’t die slowly but with a bang. 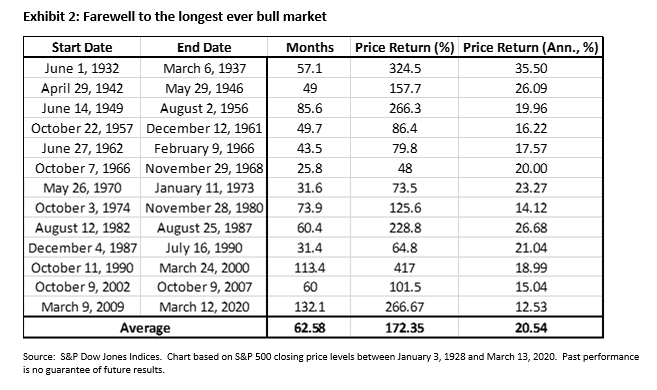 The turnaround in market sentiment also impacted smaller U.S. companies: while the S&P 500 sat 27% lower than its all-time high at last Thursday’s close, the S&P MidCap 400 (-32%) and the S&P SmallCap 600 (-34%) both fell more over the same period.  Given smaller companies’ revenues are typically more domestically focused, and so are usually more reliant on the domestic consumer and the health of the domestic economy, recent returns may reflect increasing expectations for a slowdown in the U.S. economy and the relative difficulty smaller companies may have in navigating such a scenario. 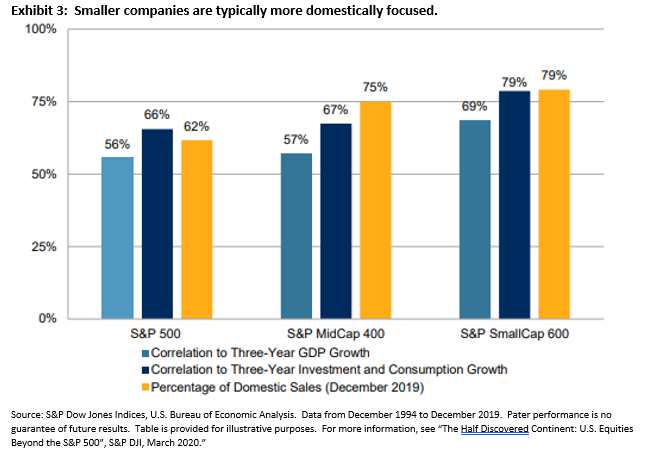 More broadly, fears surrounding coronavirus contributed to 20% declines in all but three U.S. sector indices between February 19 and March 12.  Energy companies were particularly hard hit given the recent moves in oil.  And although Friday’s gains offered some respite – the S&P 500 (+9.32%), S&P 400 (+8.46%), and S&P 600 (+8.18%) posted their best daily total returns since October 2008, and all sectors rose, as the U.S. administration set out plans for containing the virus – there remains some way to go to recover prior losses. 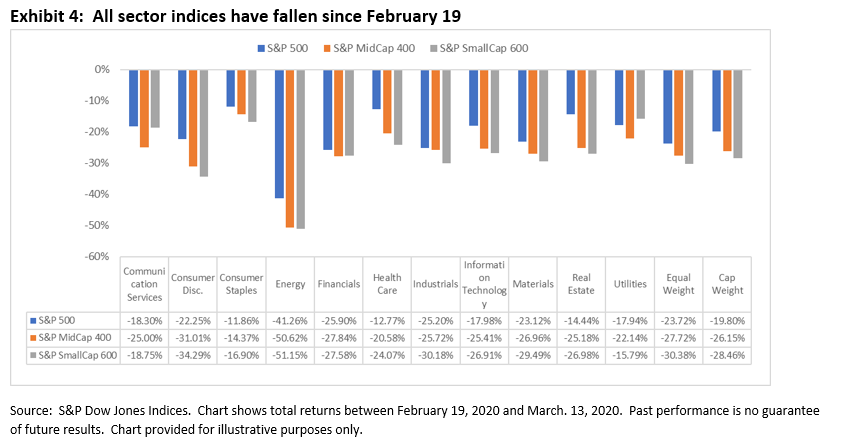 So where do the recent market movements leave us?  Undoubtedly, the last few weeks have been extremely challenging as new information on the coronavirus has been priced in real time, contributing to sizable market moves.  But as Friday’s moves highlighted, market volatility can go both ways: larger market recoveries have typically followed larger declines.  Given the difficulties in correctly timing the market, keeping calm and avoiding knee-jerk reactions may be helpful.