Source: S&P Dow Jones Indices LLC. Data from Dec. 31, 2016, to Dec. 31, 2017. Past performance is no guarantee of future results. Table is provided for illustrative purposes and reflects hypothetical historical performance. The S&P BSE SENSEX Next 50 was launched on Feb. 27, 2017.

Source: S&P Dow Jones Indices LLC. Data from Dec. 31, 2016, to Dec. 31, 2017. Past performance is no guarantee of future results. Chart is provided for illustrative purposes and reflects hypothetical historical performance. The S&P BSE SENSEX Next 50 was launched on Feb. 27, 2017.

From Exhibit 3, we can see that as of Dec. 31, 2017, the financial sector had the highest weight in the S&P BSE SENSEX Series, while the real estate sector had the lowest weight.

The S&P China Bond Index lost 0.29% in 2017; it was the only country within Pan Asian bond markets that posted a negative return. Meanwhile, its yield-to-maturity widened 19 bps to 4.77%. The performance of the S&P South Korea Bond Index also lagged other countries, but it was still up 0.53% YTD (see Exhibit 1).

Looking at the yield-to-maturity in Exhibit 2, India had the highest yield, at 7.47%, followed by Indonesia with 6.35%, and China with 4.77%. On the other hand, the lowest-yielding country was Taiwan with 0.89%, followed by Hong Kong, which was slightly higher at 1.10%. 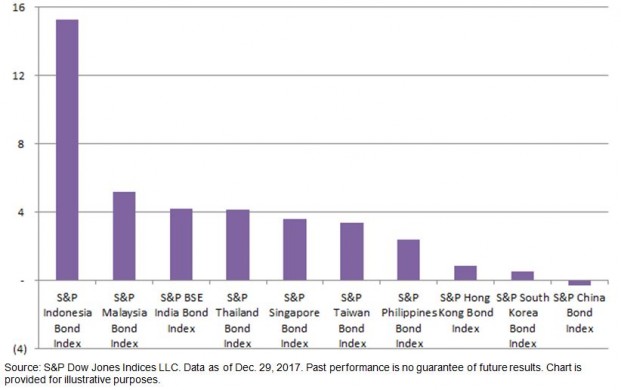 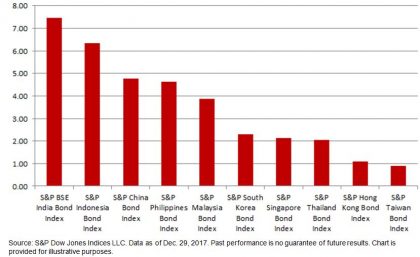