When one is paying management fees for the investment in active funds, one might reasonably expect the funds to outperform benchmarks and resist downturn when the market is volatile.  However, results from our S&P Indices Versus Active (SPIVA®) Scorecards[1] suggest this expectation is often not met.  SPIVA reports across different regions, including the U.S., Canada, Europe, Mexico, Chile, Brazil, South Africa, Australia, Japan, and India, show that benchmark indices outperformed the majority of their comparable actively managed funds over the five-year period ending June 30, 2016.

Since we published the first SPIVA Australia Scorecard in 2009, we have observed that the majority of Australian active funds in most categories have failed to beat comparable benchmark indices over three- and five-year horizons (with the exception of the Australian Equity Mid- and Small-Cap category).  As of June 2016, 69% and 38% of Australian Equity General (large-cap) and Mid- and Small-Cap funds underperformed the S&P/ASX 200 and S&P/ASX Mid-Small indices, respectively, over the five-year period.  The results for Australian Equity A-REIT, Australian Bonds, and International Equity General fund categories were far more disappointing; 92%, 89%, and 92% of funds in the three categories lagged their respective benchmark indices, respectively. 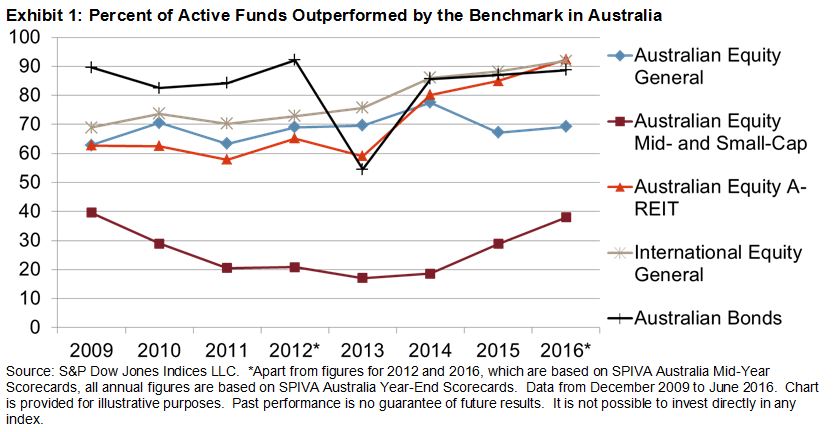 Though only a small portion of funds beat the benchmark indices in most fund categories, one might still attempt to find those outperforming funds.  However, based on our performance persistence analysis on Australian active funds, it is extremely challenging to pick winning streaks, as we found that few Australian active funds were consistent top performers.

Similar results were observed in the performance consistency analysis of U.S. active funds over consecutive years.  According to the S&P Dow Jones Indices Persistence Scorecard: August 2016, less than 1% of U.S. domestic funds that began as top-quartile performers in March 2012 ended up in the top quartile almost four years later.  This indicates that actively managed funds may have difficulty remaining in the top quartile over a five-year period. 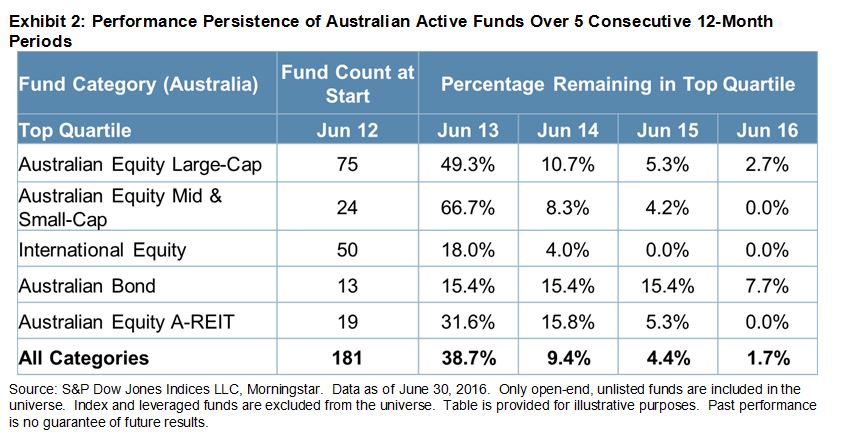 Based on results from the SPIVA Scorecards, identifying outperforming active funds is no easier than selecting winning securities.  While there are decades of research on factor-based or trading strategies attempting to beat the market, there is much less analysis and research on selecting outperforming funds.  Considered together with the observed inconsistency of active fund performance, finding funds that beat the benchmark for several consecutive years may appear an inconceivable mission.

[1]   Twice a year, we publish SPIVA Scorecards, which track the number of active funds that beat their comparable benchmarks over one-, three-, and five-year timeframes in different regions.