The SPIVA U.S Scorecard, published twice a year, is a de facto scorekeeper of the active versus passive debate. It measures the performance of the actively managed domestic equity funds across the various market capitalizations and styles. The results for the 2014 mid-year Scorecard are in and reveal very few surprises. Here are some of the key findings:

The results unequivocally show the effectiveness of indexing in the U.S equity market. Together with the Persistence Scorecard, the results highlight that not only it is extremely difficult for active funds to outperform the benchmarks, it is near impossible to find that skillful manager who can effectively do so consistently year after year.

So what is the cause of this five-year itch? On average, American home owners sell and move every five-to-seven years according to the Census, for reasons ranging from the house being too small to a job transfer. Many variables that drive single-family homes drive the condo market: upgrade, change in demographic, the need to move to a single family home, neighborhood changes, cash in equity, etc. Property owners are less likely to base their decision to buy or sell on the state of the market, and they are more likely to make the decision for personal reasons, because it’s where they live and the place most likely to affect their quality of life.

We did find that while the five-year period was the one that fared the worst, the range of returns—gains and losses—varied across the five cities. The following charts show the different holding periods for Chicago and Los Angeles. 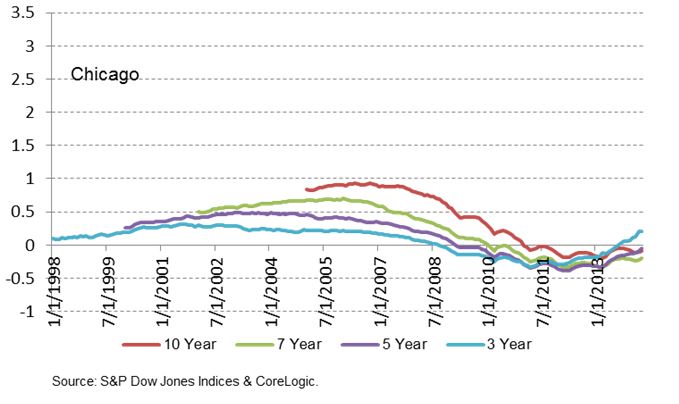 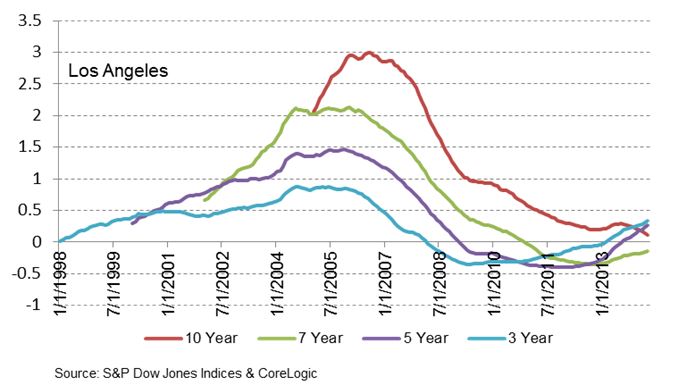 What a difference a summer makes. While many of us enjoy perfect weather, it is a nightmare for a long-only investor in agricultural commodities. Further, the drop in energy from easing supply disruptions in the middle east and slowing demand from China and the Eurozone have caused the Dow Jones Commodity Index (DJCI) to lose 7.3% in the third quarter and the S&P GSCI to lose 8.5%. This is a stark contrast from the first half of the year where the DJCI gained 5.4% and the S&P GSCI gained 7.7%. From the peaks on June 19, the indices are down 9.9% and 8.5% for DJCI and S&P GSCI, respectively.

The DJCI is halfway to the bear market, but this may not be the worst news for investors. As mentioned in the comments of a prior post, I have discussed in two book chapters, Absolute Returns in Commodity (Natural Resource) Futures Investments in Hedge Fund & Investment Management (Edited by Izzy Nelken) and also in The Long and Short of Commodity Futures Index Investing in Intelligent Commodity Investing (Edited by Hilary Till and Joseph Eagleye,) there are two major opportunities to capture returns in commodities, which are cyclical opportunities and systematic opportunities. Trend following systems can capture cyclical opportunities in commodities because only price can respond to balance supply and demand. This is since commodities in the short-run cannot be drilled, mined and grown causing relatively slow cycles of inventory building, which in-turn drives patterns of commodity prices to trend up and down. So, when there is a supply/usage imbalance in a commodity market, its price trend may be persistent, which may be captured by trend-following programs.

Trend following is strong historically in times of persistent shortages (backwardation) since the replenishing of inventories of commodities in shortage may be time consuming. Trend following may also work in times of persistent excess (contango) However, the run of contango commodities experienced from 2005-2012, seems to have ended and commodities are currently hovering at the line near equilibrium where short term disruptions swing the pendulum quickly.

It is debatable whether the shortages that appeared in 2013 and the first half of 2014 are gone for good. The inventory buildup may be temporary based on weather and geopolitics. However, one must keep focus on longer term factors like the strength of the dollar (which is historically inverse to commodity prices), rising inflation, rising interest rates and demand forces coming from China and other parts of the world.

Please join us along with +2,200 investment professionals for our S&P Dow Jones 8th Annual Commodity Seminar featuring Rob Arnott, Bob Greer and Kevin Norrish to find out answers to the following questions: 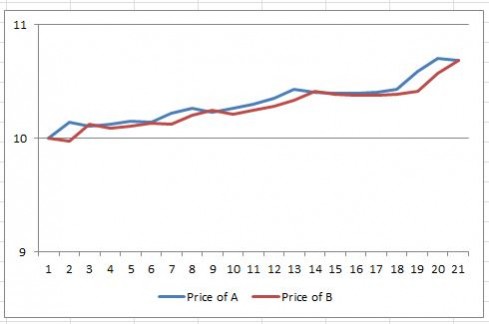 Moving past the political debate around Obamacare, the news last month drove home a more important point – not only are healthcare costs high and increasing, but the rate at which these costs increase (trend) is also volatile. Walgreens made headlines when it announced that FY 2016 pharmacy earnings would drop by over $1.1 billion dollars. The fact that an organization with the healthcare expertise and resources of Walgreens can miss earnings by over a billion dollars shows how difficult the problem of managing healthcare cost trends can be. This problem is compounded because unlike many other industries, the healthcare industry has very few tools available for managing the financial risk of cost trends.

From the outset, the S&P Healthcare Claims Indices have been designed to support financial hedging tools that could allow organizations exposed to future healthcare cost trends to manage that risk. By providing a broad range of indices that track the key measures of healthcare cost trends (such as drug costs, hospital costs, regional trends and insurance plan trends), the indices can be tailored to allow organizations to track the specific cost trends that are critical to their own situation. In cases such as Walgreens, the ability to hedge exposure to the impact of future price changes in generic/brand drugs (or changes in utilization) could have provided a solution to the inherent risk of volatile trends. Although the S&P Healthcare Claims Indices have only been available since October 2013, some organizations such as health insurance carriers and employers are already beginning to look to the indices as a way to hedge financial exposure. The application of index based risk management tools to healthcare financing is an exciting development and could be a critical component in bringing healthcare costs under control.