A Bang not a Whimper

Thus far on the blog, we have written a few pieces about busts in the stock market. David Blitzer wrote, “Whenever this bull market ends, it is likely to be with a bang, not a whimper.” He also wrote about Deflation, Debt and Disaster where he pointed out we may be on the edge of deflation, which leads to stagnant economies and depression. I also pointed out the cycle of stock-to-commodity outperformance may be switching back in favor of commodities.

With the possibility of doom and gloom over the stock market, a natural question may be where to turn to protect your assets. Many consider gold a safe-haven, but is it really? My colleague, Reid Steadman, wrote about VIX – The Enforcer, where in a hockey analogy he pointed out that when other markets fail, VIX may be the last line of defense.  It is a decent argument that VIX may act as a strong safe-haven.

However, many might be hesitant to believe that VIX, a reflection of volatility, is a safe-haven since it’s not tangible. Despite the fact that not even the luckiest person can catch the leprechaun with the pot of gold at the end of the rainbow, at least everyone can dream that picture.  But what does a pot of VIX look like? Besides charts in a pot?

Although Reid does a good job of explaining what is VIX, as humans we possess irrational behaviors (besides believing we can catch a leprechaun with a pot of gold).  One of our behaviors is biased expectations or overconfidence that leads to misapprehensions about oneself and to the illusion of control.

In a published card game example, investors are more confident in the value of the cards they TOUCHED. The example is as follows:

Why does this matter?  It is since investors may value the tangible property of gold as a store of value, or currency, that it has been considered a safe-haven asset as throughout history. But the question is at what price? Is gold as a safe-haven really more valuable than VIX at protecting your portfolio in hard stock market times?

That all depends on how we measure time frames and what we consider protection, but from the look of it, we put much too high of a value on the tangibility of gold.

Let’s take a look at the overall cumulative return chart of S&P GSCI Gold, VIX, S&P GSCI and S&P 500.  Gold looks pretty attractive relative to VIX but we need to dig deeper to see which does a better job as a safe-haven.

However, the results become more clear when evaluating other metrics. VIX has the lowest correlation to the S&P 500 of -0.63, compared to -0.01 of S&P GSCI Gold with the S&P 500 and 0.18 of the S&P GSCI with the S&P 500.  This implies VIX has stronger diversification properties that could potentially lead to greater capital preservation when mixed with stocks.

VIX also has the best record of positive months when the S&P 500 lost. In 79% of down months for the S&P 500, VIX was positive.  The S&P GSCI Gold and S&P GSCI didn’t do a bad job but came up short again versus VIX.

Finally, maybe when it counts most, we measure two crisis periods during this time: the tech bubble burst and the global financial crisis.  Once again both gold and VIX protect but VIX wins.

As investors, and humans, we really might price the value of the golden touch too highly.

I thought you might be interested in a recent article, Gunzberg: Commodities To Upstage Stocks, written by Cinthia Murphy on March 11, 2014 on etf.com. Many of the discussion points cover the concepts from one of my prior posts, COMMODITY COMEBACK.

Commodities markets have been major underdogs relative to record-breaking U.S. equities for much of the past six years. But the tides are now turning, S&P Dow Jones Indices’s global head of commodities Jodie Gunzberg says.

Amid supply shocks around the globe, tapering of quantitative easing in the U.S. and a rising-interest-rate outlook, commodities from corn to hogs to oil seem bound to shine in 2014, leaving equities in their shadows, Gunzberg told ETF.com in a recent interview.

ETF.com: You believe commodities will outperform equities this year as the commodity/equity cycle switches over in favor of commodities. Why?

Jodie Gunzberg: Commodities and stocks have had a long relationship of switching off performance because of the underlying cycle of what’s happening in the companies and the goods that they produce. Equities are forward-looking, and now they’ve been ahead of commodities for six years straight. That’s the second-longest stretch of outperformance over commodities since 1980 to 1987.

What happens is that once companies start doing well, and they’re raising capital, and equities are performing well, they then have the resources to spend on commodities to make more products.

That might be where we’re at now, with companies buying more and more commodities to produce their goods. Through … to read the rest of the interview, please click here.

A Bang not a Whimper

Whenever this bull market ends, it is likely to be with a bang, not a whimper. The bull market began on March 9th, 2009, five years ago.  The last bull market lasted exactly five years from October 2002 to October 2007; the one before that – the great tech boom – lasted 10 years. This bull market isn’t that old. Aside from the passage of time, the next concern people raise is valuation – are stock prices “too high?”  While valuations, measured by price-earnings ratios, are above long run averages, they are modest or almost reasonable compared to the technology boom of the 1990s. Moreover, the S&P 500 is not concentrated in a few stocks or one sector. Technology is closer to a fifth of the index value today than the third it was at the end of the 1990s. The index itself is not that concentrated either: the largest stock is less than 3% of the total market value.

In keeping with the title, guessing the end of the bear market probably means guessing the next economic, political or financial upheaval.  The situation in the Ukraine is not likely to end the bull market unless the US becomes involved in military action – an extremely remote possibility.  A more likely scenario that might send the market lower would be large default of one or more junk bond issues.  The long period of low interest rates has made people more adventurous with credit risk.  Equity investors, especially after the bear markets in 2002 and 2007, should recognize that stocks can nose dive; bond investors would need memories extending back to the 1970s to understand some of the dangers.  We seem to be nervously safe for the moment.

Today’s Wall Street Journal brought the latest in a string of articles suggesting that we have entered a period of particular opportunity for active investment management — a so-called “stock-picker’s market.”  Because the average correlation of stocks within the S&P 500 or other major indices has declined, it’s argued, “active managers are going to do better” as the “cream rises to the top.”

Or maybe not.  The argument in favor of active management in 2014 has to contend with at least three inconvenient truths.

Of course, there can still be periods when the average institutional manager outperforms a market index — but they occur only when the rows and the columns don’t match.  For example, if individual investors control 80% of the assets, and institutions control 20%, it’s entirely possible for most of the institutions to do better than the market average.  (This may be a fair description of the 1950s and 1960s.)  If a market index doesn’t describe the managers’ entire opportunity set, it’s also possible for the average manager to outperform — perhaps by buying small- and mid-cap stocks while being compared to a large-cap benchmark.

But if the index is sufficiently comprehensive, and the census of all investors is sufficiently accurate — the inexorable arithmetic of active management will hold.  Empirical studies have amply verified the theoretical argument.

Second, correlation is primarily a measure of timing, not of investment opportunity.  Assets which are positively correlated go up and down at the same time; negatively correlated assets move in opposite directions.  It’s not hard to put together an example of two stocks with perfectly negative correlation but with identical returns over the course of a month.  An omniscient day trader would benefit from trading these stocks.  For the rest of us, the benefits are less clear.  The fact that correlations declined in 2013 means that (other things equal) the market will be less volatile in 2014.  It does not mean that active manager performance will improve — the average is still average.

Finally, dispersion — which is a measure of investment opportunity — remains low. Unlike correlation, which measures whether assets go up and down at the same time, dispersion reflects the degree of difference between the best and the worst performers.  In a high dispersion environment, there’s a large gap between the “best” stocks and the “worst” stocks; when dispersion is low, the gap is small.  In 2013, dispersion in the U.S. market — despite falling correlations — was at its all-time low: 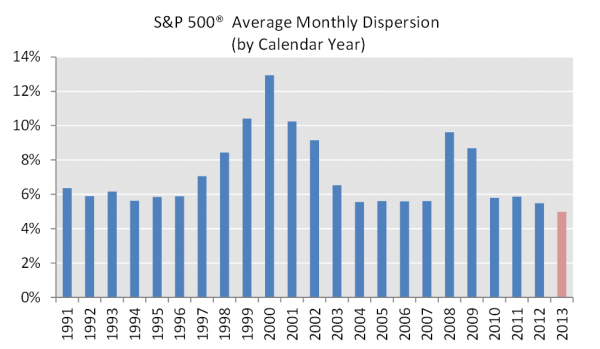 Although dispersion ticked up modestly at the beginning of 2014, it’s still well below its historical average level.  This doesn’t mean that a skillful (or lucky) manager will be less skillful (or lucky) than he would otherwise be.  Dispersion says nothing about the level of a manager’s skill, but it signifies something important about the value of that manager’s skill.  The fact that today’s dispersion levels are quite low implies that the rewards to successful stock picking are likely to be small by historical standards.

Which does not sound like a “stock-picker’s market” to me.