Is Passive Investing an Evergreen Option in India?

The Downs and Ups of Latin American Markets – April 2020 Review

Is Passive Investing an Evergreen Option in India?

How can indices help inform and simplify decision making in the current climate? S&P DJI’s Koel Ghosh explores potential roles indexing could play when allocating for desired outcomes during COVID-19 and beyond.

Since its debut in April 2000, the S&P/ASX Index Series has served as the de facto measure of value and performance for the Australian stock market, becoming an integral part of the country’s market infrastructure. 2020 has tested the resilience of that infrastructure; as pandemic fears gripped financial markets, stocks ricocheted, and trading in index-linked instruments spiked. During this period of volatility, the S&P/ASX Index ecosystem provided crucial liquidity to market participants.

In Q1 2020, many market participants used the most liquid, transparent instruments available to manage their exposure to equities. Futures, options, and exchange-traded funds (ETFs) linked to the S&P/ASX Index Series saw record trading volumes, with over AUD 1 trillion in index-linked trading during the first quarter—a 50% increase from the first quarter of 2019. Trading was mostly concentrated in products tracking the S&P/ASX 200, but products tracking other S&P/ASX Indices saw larger relative increases, with trading tripling year-over-year in products associated with the S&P/ASX 300 and the S&P/ASX Dividend Indices.

In March 2020, trading costs soared globally, providing the test of record highs in volatility. Across the whole first quarter, average bid-ask spreads were wider across the board for Australian ETFs. 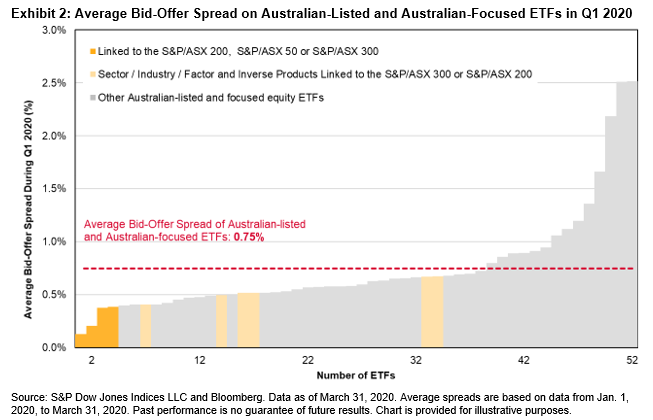 Market efficiency is not the gift of a benevolent providence. A trading ecosystem sufficiently large and active can benefit asset owners and investment managers by offering transparency, efficiency, and improving confidence. And as markets reached lows, the importance of liquidity and benefits of a large and trusted ecosystem reached new heights.

1 See “A Window on Index Liquidity: Volumes Linked to S&P DJI Indices,” (2019), for details of how the IET is calculated for various types of products.

The S&P 500® Quality, Value & Momentum Multi-Factor Index is designed to measure the performance of stocks having the highest combination of quality, value, and momentum (QVM). It takes a “bottom-up” approach of scoring each stock on its individual factor attributes and selecting stocks that jointly score highest across all the factors [1]. In light of the recent market turbulence, let us examine the performance of this index in comparison with the alternative “top-down” approach to multi-factor portfolio construction, i.e., taking an equally weighted combination of single-factor indices, referred to as an “index of indices” (IOI)[2].

During the recent market sell-off, most of the factor indices declined until they reached a bottom in late March, before rebounding partially over the following month. Exhibit 1 shows the performance of single-factor indices and the two multi-factor combinations. While the S&P 500 QVM Multi-Factor Index’s outperformance over the IOI approach was not massive, it still did provide about 60 bps of excess return in both declining and rising phases of the market. 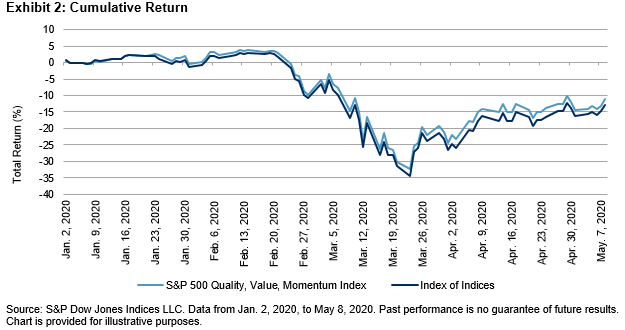 In order to see if there is any compositional bias that leads to this outperformance, we examine the overlap between the S&P 500 QVM Multi-Factor Index constituents and the individual factor index constituents. We quantify this overlap as the percentage of index weights held in common [3]. 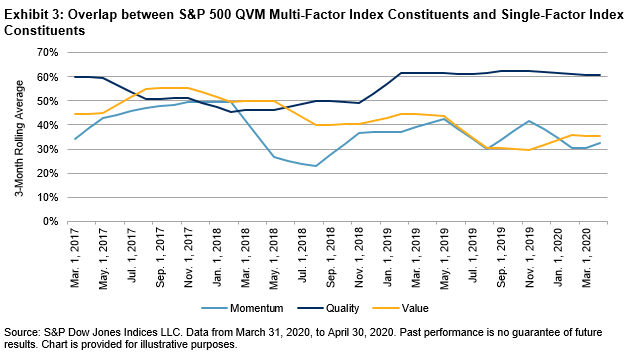 Exhibit 3 shows that the S&P 500 QVM Multi-Factor Index tends to have a higher overlap with the quality factor (which has outperformed recently [4]), and a lower overlap with the value and momentum indices. This is partly due to a negative correlation between momentum and value exposures among S&P 500 constituents (see Exhibit 4), which implies that high-quality stocks have a better chance of being selected when constituents are sorted on an average of all three factor scores. 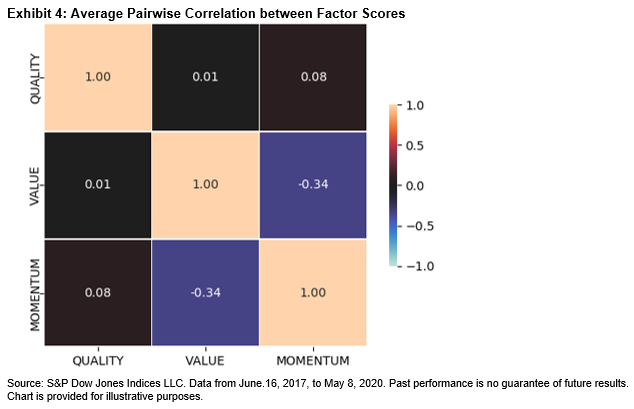 Combining factors in a top-down manner tends to dilute individual factor loadings, since stocks that have a strong positive score on one factor might have a large negative score on another [5].

By picking overall winners across all factors, the S&P 500 QVM Multi-Factor Index held up relatively better than the top-down (IOI) approach during the recent market turmoil. Though the examined time period is relatively short and the excess performance is small, the potential benefits of bottom-up selection still shined through.

[2] “The Merits and Methods of Multi-Factor Investing” available at https://spdji.com/indexology/factors/the-merits-and-methods-of-multi-factor-investing

There is a subtle but important distinction between factors and factor indices.  “Factor” denotes an attribute with which long-term excess returns are thought to be associated.  Fama and French, for instance, famously found that small size and cheap valuation were factors in this sense.  A number of other variables – prominently including momentum, low volatility, and quality – have likewise joined the factor pantheon.

Factor indices are designed to provide exposure to one or more of these underlying factors; although quite distinct in their portfolio construction techniques, their commonality stems from the use of factor attributes as a basis for stock selection.  The frequency with which factor indices are rebalanced will influence the degree to which they provide exposure to their target factors.

For example, imagine an index which aims to deliver exposure to the value factor, and so tracks the 50 cheapest stocks in the S&P 500.  Suppose that, over the six months subsequent to its rebalance, most of those stocks become more expensive than the other 450 S&P 500 stocks.  Then our hypothetical value index, which may have perfectly embodied the value factor six months ago, now will embody it less.  The general principle is clear: a factor index best represents its underlying factors at the moment it is rebalanced.  After that, factor drift is not only possible, but likely.

How much drift, and how likely it is, depends on at least two things.  The first of these is the degree to which the factor is observable.  Factors like momentum and low volatility, e.g., depend only on the movement of prices; it’s easy to know whether a stock has high or low momentum.  Factors like quality or growth, on the other hand, are attributes of a company, not a stock price.  They can only be inferred by using accounting or other non-price inputs (which themselves can be observed only at annual or quarterly intervals, and then sometimes with a substantial lag).  To the degree that we anchor our factor definitions in non-price data, we’re likely to observe relatively slower drift.

A second determinant of drift is the degree to which prices change between rebalances.  Here we can base our expectations of drift on the dispersion of stock returns.  Dispersion measures the extent of idiosyncratic price changes within a parent index.  In a period of relatively low dispersion, the prices of most stocks will have changed by a relatively small amount, leading to relatively low potential factor drift.  When dispersion is high, the opposite is true – there will have been a great deal of price movement, and potentially a great deal of factor drift.

Given the spike upward in dispersion that we’ve observed this year, it is likely that turnover for factor indices as they’re rebalanced throughout 2020 will be substantially higher than average.

The Downs and Ups of Latin American Markets – April 2020 Review

Investment in Latin America’s equity markets is not for the faint of heart—now more than ever. In the first quarter of 2020, all markets in the region were significantly negative, plagued by recent events. While April has swung markets back to positive territory, we are still far from the proverbial “light at the end of the tunnel.”

In the midst of the continued global pandemic, many countries have started to ease restrictions, as presumed cases of COVID-19 and mortality rates have lowered. This has led to talks of “reopening” economies, infusing investors with courage and optimism—even if it is short lived. With the highest number of recorded COVID-19 infections and deaths globally, the U.S. will look to May 2020 with cautious hope. The million dollar question is when it will be safe for consumers to return to stores and restaurants and to resume travel. Even after businesses and services are fully reopened, many may not have the financial means to participate. In fact, there are already reports of increased debt, credit defaults, and bankruptcies at the business and personal level.

S&P Global Ratings recently reported that credit conditions in emerging markets were worsening. In the latest report,[1] 2020 GDP growth forecasts for Latin America were substantially revised downward. Latin America GDP is expected to fall about 5% in 2020 and a recession is forecast across the region. Economists predict that countries like Chile, which quickly implemented social-distancing policies and offered strong economic stimulus, could have a robust recovery and stand out among its peers. Meanwhile, Mexico and other countries, which delayed public health policies and offered limited stimulus programs, may see weak recoveries. Brazil will most likely be somewhere in the middle.

For now, let’s bask in the latest positive monthly returns for the region. April brought a ray of sunshine to equity indices, as promising treatments and development of vaccines to combat COVID-19 are on the horizon. The S&P 500® was up 13% for the month, while the S&P Latin American BMI gained nearly 7%. The S&P Latin America 40, which measures the largest, most liquid stocks in the region, gained 5.2%. Among the larger countries, Chile’s S&P IPSA gained 14%, while the S&P Brazil LargeMidCap returned 10%, and Mexico’s S&P/BMV IPC gained nearly 6%. However, none of the country indices gained as much as Argentina’s S&P MERVAL Index, which returned a whopping 34.3%. Despite April’s strong performance, most indices were still in the red YTD. Given all the uncertainty in the markets, continued high volatility is still expected for the rest of the year.

Despite the pandemonium, some indices are standing out from the pack, highlighting how their methodologies function under extreme market conditions. In Mexico, the S&P/BMV IPC Inverse Daily Index, which provides the inverse performance of the S&P/BMV IPC on a daily basis, was up 15.5% YTD. The S&P/BMV IRT Risk Control Indices, which reduce their exposure to equity when volatility rises above pre-defined thresholds (i.e., 5% or 10%, annualized) have outperformed the benchmark.

The S&P/BMV Mexico Target Risk Indices were also winners, thanks to their partial inclusion of fixed income exposure. The series comprises four indices that combine varied levels of equity and fixed income, ranging from conservative to aggressive allocations, while adhering to the constraints of the investment regime of the local pension funds.

The S&P/BMV Ingenius Index seeks to track some of the world’s largest, most innovative, tech companies, which have generally proven to fare well during this pandemic, and seemed to capture this trend YTD. The S&P/BMV China SX20 Index, which is designed to measure separate international stocks trading on Mexico’s BMV, continued to do well largely due to the recent depreciation of the Mexican peso relative to the U.S. dollar. The S&P/BMV MXN-USD Currency Index, which aims to track the change between the currencies, also performed well YTD (see Exhibit 4). 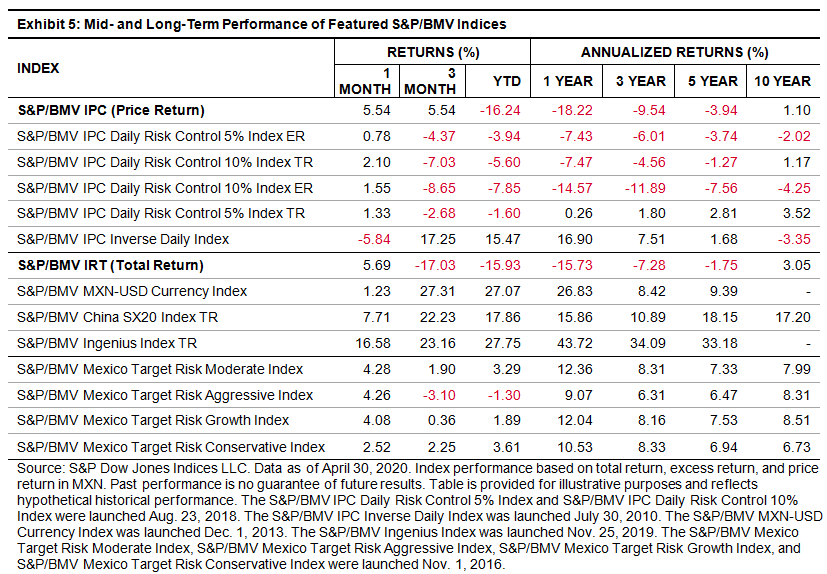