In light of the gold buying tradition for the upcoming Diwali festival in India, many might be wondering how valuable their gifts may be based on the price of gold.  Several factors influence the price of gold that make timing gold as an investment difficult; however, now there might be upside potential for gold, especially since its volatility is so low.

Currently, the 90-day annualized volatility (ending on Oct. 10, 2017) of the S&P GSCI Gold is 12.3%.  It has been hovering around this level since July and is at its lowest since August 2005.  Though 12 years is a long time, when gold’s current volatility is compared with its volatility during past Diwali celebrations, one needs to look all the way back to Diwali 1996 to find lower volatility.  In all of gold history since 1978, the 2017 Diwali period exhibits the sixth lowest volatility on record and is only higher than levels observed in 1991, 1992, 1994, 1995 and 1996, denoted by the vertical lines in the chart below.

Like other factors in isolation, the low gold volatility does not have strong predictive power over future gold price moves.  However, when gold had big losses of more than 30% in one year, there was always greater than 30% volatility.

Based on the history, it seems there may be more upside potential than downside risk for gold with its current low level of volatility.  What may be more important though is how solidly gold has provided diversification from equities.   Given the historically strong bull run the stock market is having, if the market has corrected as it has in the past, some gold as protection may be useful.

Other factors to watch for moves on gold are the U.S. dollar, inflation, GDP growth and interest rates:

The bottom line is that there may be more upside potential for gold given its low volatility, in conjunction with several other factors in question like continued dollar strength, economic growth, rising inflation and interest rates.

Here are six notable developments in the U.S. financial markets in September 2017.

What do these events have in common?

They are all reversals from the January-August 2017 period, where large caps outperformed smaller caps, growth outperformed value, and energy lagged due to weakness in oil compared to the utilities sector, which was the second top performer in August.  Meanwhile, emerging markets outperformed developed ex-U.S. markets, while Treasury yields fell.

What was different about September 2017?

The bull market in equities deepened through the cap spectrum.  While smaller caps, value, and energy still lag on a YTD basis, the S&P SmallCap 600® was up 8% in September 2017 compared to the S&P 500®’s 2% gain.  Similarly, the S&P 500 Value gained 3% compared to the S&P 500 Growth’s 1% gain.  Energy made a turnaround as the top-performing sector in September, thanks to the rebound in oil prices, which also drove the gains in the S&P GSCI.  Meanwhile, utilities performed poorly in September, declining 3%, a reversal from the prior month, indicating market participants’ return to a risk-on appetite.  Emerging markets also stumbled, with the S&P Emerging BMI down 1%.

Is the “Trump” trade making a comeback?

Flash back to November 2016, when the U.S. equity markets and small caps in particular rallied post the U.S. Presidential election, with the S&P SmallCap 600 up 13% that month, while emerging markets declined.  Treasury yields rose, while energy posted gains and the utilities sector was the worst performer.  The S&P 500 Value gained 6%, outperforming the S&P 500 Growth’s 1% gain.

November 2016’s market performance sounds eerily familiar to that of September 2017.  We would argue that these themes are not six independent things—they are six different manifestations of one “big thing”.  That “big thing” is the perception that the U.S. economy is strong and poised to continue growing at a rapid clip.  One of the drivers of this perception is the possibility of growth-oriented tax reform, which will aid in boosting companies’ earnings and thereby solidify market fundamentals.

Will the coming months offer a continuation of these trends?  We caution that predicting market outcomes is challenging given the many geo-political uncertainties at stake.  Time will tell.

The active versus passive debate has been a continuous subject of discussion in the evolving asset management industry.  S&P Dow Jones Indices launched the first SPIVA India scorecard in 2013 to provide a barometer on this subject. The Indian market has witnessed significant growth (albeit from a small base) in passive investment products that offer lower cost and more transparent access to targeted segments of the market compared with the actively managed products.  Passive investment products have been evolving, and there have been an increasing number of products that implement various investment strategies that were once considered exclusive tools used mostly by active fund managers.

Exhibit 1 reviews the percentage of funds that underperformed their respective benchmarks in each category for the five-year rolling period between December 2013 and June 2017.  The majority of Indian Equity Large-Cap, Indian Government Bond, and Indian Composite Bond funds underperformed their respective benchmarks for most of the period.  Indian ELSS funds had the highest percentage of actively managed funds leading the benchmark over the period.

Exhibit 1: Percentage of Active Funds That Underperformed Their Respective Benchmarks (over a rolling 5-year horizon) 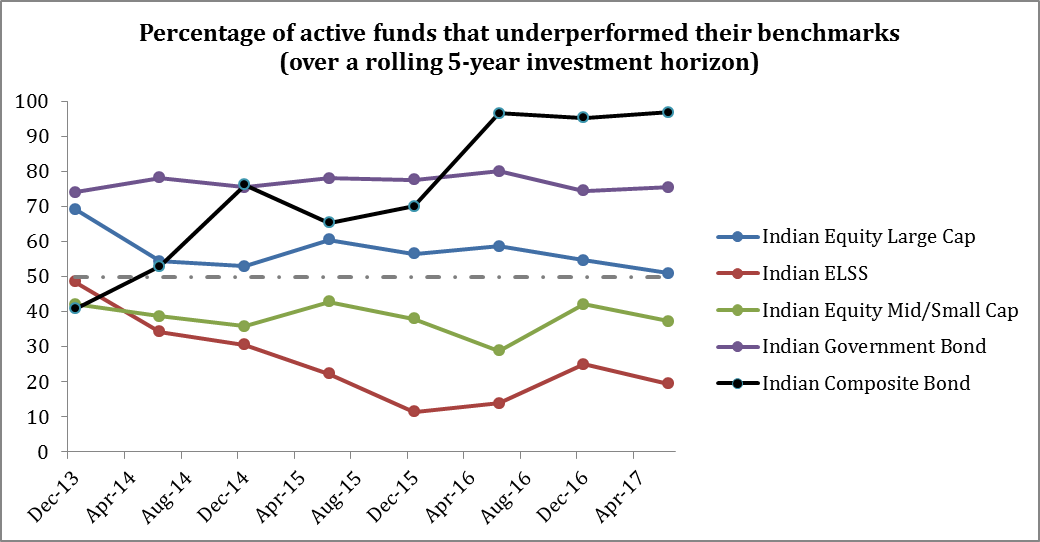 Source: S&P Dow Jones Indices LLC.  Figures based on Mid-Year and Year-End SPIVA India scorecards since December 2013 to June 2017.  Chart is provided for illustrative purposes.  Past performance is no guarantee of future results.

Indian Equity Large-Cap funds generated relatively slight excess returns over the S&P BSE 100 for the five-year rolling horizon (see Exhibit 2).  Moreover, more than 50% of funds failed to beat their benchmarks.  Both categories of bond funds—Indian Government Bond and Indian Composite Bond—generated negative excess returns for the five-year rolling horizon, with more than 75% underperforming their respective benchmarks as of June 2017. 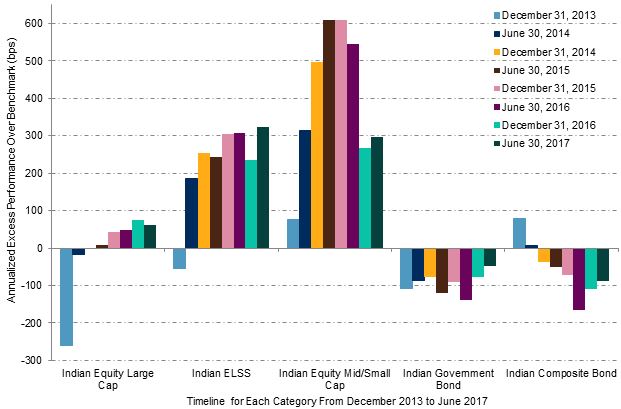 Source: S&P Dow Jones Indices LLC.  Figures based on Mid-Year and Year-End SPIVA India scorecards from December 2013 to June 2017.  Chart is provided for illustrative purposes.  Past performance is no guarantee of future results.

The SPIVA Latin America Mid-Year 2017 Scorecard was released this week.  The report covers Brazil, Chile, and Mexico in selected fund categories.  In line with the rest of the world, widespread gains were seen in both fixed income and equity markets in Latin America in the first six months of 2017.

The recent rise in the markets didn’t lead to outperformance by active fund managers against category benchmarks, as the majority of managers underperformed across all categories measured.  The percentage of funds outperformed by benchmarks in each category for the one-, three-, and five-year performance lookback periods are shown in Exhibit 1.

In September, three of five sectors were positive and thirteen of twenty four commodities were positive in the S&P GSCI Total Return that had an overall return of 3.3% in the month, 7.2% for the third quarter and -3.8% year-to-date.  Energy was the best performing sector for the month, returning 5.9%, while the precious metals sector lost the most, down 3.0% in September.  Gasoil was the winning single commodity for the month with a gain of 9.3%, and nickel lost 11.3% in the month, making it the most losing single commodity.

During the month, oil entered a bull market since the June 21, 2017 bottom with Brent Crude up 26.1% and (WTI) Crude Oil up 21.5% from better OPEC compliance, hurricane Harvey, and strong demand growth. Brent backwardation is the most since June 2014, and WTI crude oil contango was smallest since Dec 2014, before the storm but refinery disruptions and demand slowdown boosted the contango again to the highest since Jan 2017.

The after-effects of hurricanes generally have an impact on the commodities market. Hurricane Harvey caused gas prices to rise because the infrastructure needed to transport the gas to the refineries in Texas was badly damaged, but the price has come down as refineries come back online.

On the other hand, gasoil has continued to rise from not just the supply disruption, but also from the increased demand of fuel for machinery in construction for the rebuilding in the aftermath of the hurricanes.

Overall, the disruption to the energy supply led energy to have its best month yet in 2017, and again could be a solid foundation for the market to rebalance. On the flip side precious metals lost 3.0% in September, led by gold down 2.8%, posting the worst month (for both precious metals sector and gold single) not just this year but since Nov, 2016.  This is from a rising dollar and expectations of a rate hike.  This split shows the fundamentals are overtaking the aggregate demand in driving commodities today.

For more on quarterly performance, please see this article and this one too.