“I don’t agree with you Jodie…..Gold is in a bear market….too early to put some money in the yellow metal….” is a comment from the article recently posted by the Economic Times asking the question, “Where do you see the gold prices making a bottom as every fundamental turns unfavorable for gold?”

We love your comments expressing your opinions about where the market is and where it’s going, just as much as we love to share the history lessons told through our indices.

Let’s pretend today is sometime in the middle of 1981. President Reagan just established the Gold Commission that rejected returning the U.S. to a gold standard. The Fed raised rates to 20% and inflation fell. But that created a recession. Gold investors lost about half their asset values. They wondered, “Had gold reached its bottom?” 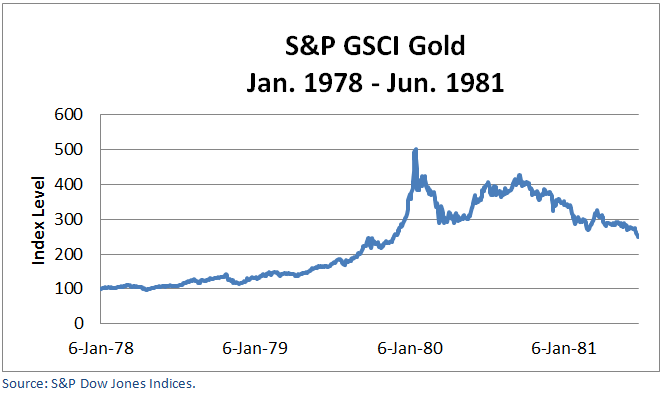 To understand the answer to this question, investors might consider the underpinnings of the prior bull run of over 400% that started when Nixon took the dollar off the gold standard in 1973. Inflation tripled, the dollar crashed, and after years of erratic monetary policy, investors piled into gold as a safe haven. The perfect environment for gold ended and investors wondered about the future of gold without these supports.

For the next 20 years, gold lived through mostly expansionary periods. Even as investors abandoned gold for stocks, gold didn’t fall much further. 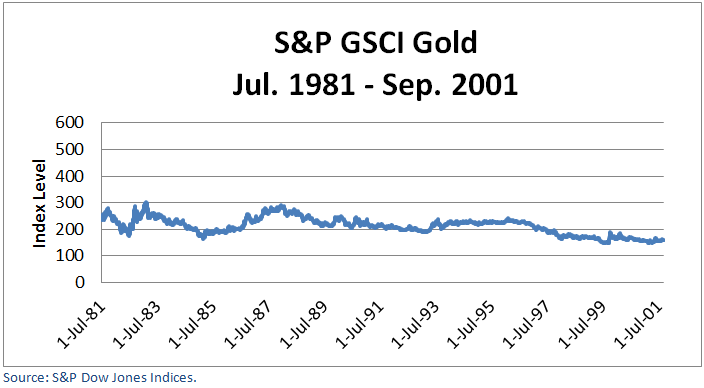 Not until Sep. 11, 2001, did fear ripple through the market, triggering the flight to safety into gold again. The drivers of inflation and a weak dollar that supported gold through the 1970’s bull run were back. These factors plus the global financial crisis and worries about government reform led gold to a record high. Such forces in addition to the growing popularity of the gold ETF as a new way for investors to access gold sent gold soaring more than 600% over the next ten years, until Aug. 2011.

As worries eased, investors fled gold once again. However, many in this selloff have no memory of the 65% drop that happened in 1981-82. Currently, gold has only lost 45% since its peak four years ago, but the majority of the loss happened in 2013 when gold dropped 28%, the most since 1981. 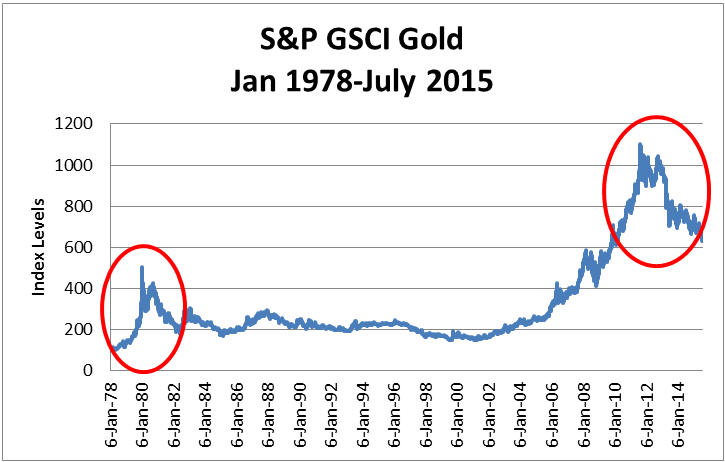 It is difficult to predict where the bottom is but the last time gold dropped this much it took over 25 years to recover. It certainly diminishes the importance of identifying the bottom even if the bottom has been reached.

Gold would need to drop another 40% from current levels in order to match the 1981-82 drawdown, so it wouldn’t be surprising to see gold fall further. Investors need to look to underpinning fundamentals again to understand gold. Poor economic data from China, inflation under control, low interest rates plus gold’s diminished status of a safe haven are not promising. Investors continue to flee as evidenced by recent record outflows. If interest rates rise again that may help gold futures since the collateral return increases but there may be outflows in lieu of income producing securities.

Since most single factors like inflation, interest rates, jewelry demand, oil prices, geopolitics and U.S. dollar strength don’t alone move gold, they are unreliable indicators of gold’s prices. However, one statistic that is pretty solid through time is that gold is uncorrelated to the stock market. On average, the 12- month correlation is zero but even on short intervals of rolling 90 days the correlation doesn’t ever exceed 0.6. 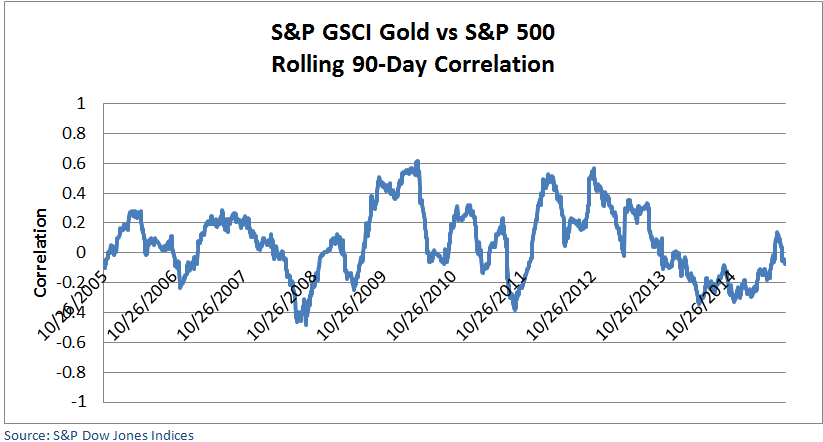 Once again, timing gold doesn’t necessarily matter. Gold is not always owned for high returns but instead serves to protect against a drop in other assets like stocks. It has held up in times of inflation and may hedge against other risks like geopolitical risk that hurts stocks. Investors looking for diversification and capital preservation may use gold in a portfolio framework at any time.  Now is as good of a time as any to invest in gold given its recent drawdown and the strong stock market performance over the past several years.

Again, we’d love to hear your thoughts. Do you think now is the right time to buy gold? Or do you agree with the comment above that it’s too early to buy gold?