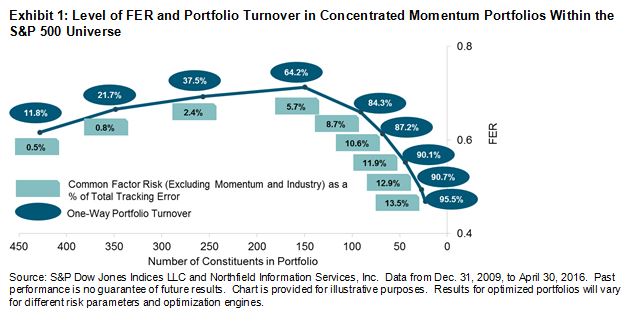 2016 has been an unpredictable year on many fronts, whether it was Leicester City FC winning the Premier League, the Brexit, or the U.S. election results.  In India, “demonetization” and the Goods and Services Tax (GST) are fundamentally altering fund managers’ target portfolios.  Active institutional fund managers have the benefit of professionally run research teams.  The question is, therefore, how do individual market participants churn their portfolios in times of such volatility?

Many active portfolio managers have been adopting risk factors to achieve portfolio diversification and deliver excess returns.  These common risk factors include size, dividend, volatility, momentum, quality, and value.  In recent years, an increasing number of passive investment products have been designed to capture the potential benefits of factor-based investing (also referred to as “smart beta”) as well as the transparency and cost effectiveness of passive investing.

We recently published a report called Factor Risk Premia in the Indian Market, which studies the risk/return characteristics of common risk factors in the Indian equity market.  The research analyzed four common equity risk factors—low volatility, risk-adjusted momentum, quality, and value—based on the S&P BSE LargeMidCap universe back-tested from Sept. 30, 2005, to April 30, 2016.  Using the monthly return of the S&P BSE LargeMidCap to define up and down markets, we summarized the performance of different factors under these two market conditions.

The low volatility portfolio delivered significant excess return in the overall period, and the excess return was more pronounced during down markets.  The quality portfolio, which was constructed using a combined score on return on equity (ROE), the balance sheet accruals ratio, and the financial leverage ratio, demonstrated similar defensive characteristics as the low volatility portfolio.  In contrast, the value portfolio, constructed using book-to-price, earnings-to-price, and sales-to-price ratios, tended to outperform during up markets but significantly underperforms in down markets.  The risk-adjusted momentum portfolio did not deliver significant excess returns in the overall period, despite significantly outperforming the benchmark during down markets.

The analysis shows that different risk factors in the Indian equity market have distinct characteristics and, therefore, they can be used for the implementation of active investment views.  Moreover, blending risk factors with low return correlation may also provide portfolio diversification to mitigate risk.

*Implies significance at a 5% level.

Commodities ended 2016 by posting the first positive returns in 4 years. The S&P GSCI Total Return gained 11.4% and the DJCI (Dow Jones Commodity Index) gained 13.3%.  Energy was the best performing sector gaining 18.1% in the S&P GSCI, and livestock performed worst, losing 7.3%. Agriculture, industrial metals and precious metals returned -4.2%, 17.6%, and 8.4%, respectively. It was the energy sector’s best year since 2007, when it gained 41.9%. It was also the industrial metal’s best year since 2009, when it gained 82.4%. The comeback in these two sectors together is meaningful since they are the most economically sensitive. The last time these two sectors were up this much together after two consecutive negative years was in 1999, that led commodities to return roughly 360% through 2007.  Through history since 1970, the average number of consecutive positive years is 3.5 years with rarely a single positive year.

In 2016, there were 17 positive commodities of 24 total, that is the most since 2010 when 21 were positive. It is also the greatest comeback (from only 2 positive commodities last year, namely cocoa and cotton) since the 2009 improvement when 18 were positive after only 2 gained in 2008 – cocoa and gold.  This year, cocoa was the worst performing commodity, losing 33.0%, while zinc performed best, gaining 57.4%. For cocoa, 2016 was the 3rd worst on record but it was the 3rd best year for zinc.  Despite some relatively high and low rankings, the overall index performance rank fell exactly in the middle of its historical performance ranking both its 24th best and 24th worst year.  Also, although many commodities of energy and industrial metals did well, the sectors’ returns only ranked as their 14th (energy) and 12th (industrial metals) best years.

One potential concern is there were only six commodities (cocoa, cotton, feeder cattle, natural gas, sugar and wheat) in backwardation in December which is just below the average number of 6.8 for this time of year, which means there still needs to be more inventory drawn down before there are persistent shortages.

However, while the S&P 500 beat the S&P GSCI in 2016, by 59 basis points, extending the commodity consecutive annual under-performance to a new record of nine years, the gap is closing that could indicate a turning point in the cycle for commodities.

The three most powerful influences on commodities in 2017 are OPEC’s ability to manage oil production in the face of US competition, Trump’s impact on inflation and growth, and a potential weakening dollar.

In geopolitical terms 2016 was a tumultuous year. From the outcome of the Brexit referendum to the surprising conclusion of the U.S. presidential election, 2016 was a year of political surprises. The markets, braced or not, reacted differently in each case. We saw heightened correlation in the aftermath of Brexit and observed higher dispersion immediately after the U.S. presidential election.  Heightened dispersion and/or correlation levels can accompany market weakness, but in both of these cases, the markets rallied and dispersion and correlation readings returned to average levels in fairly short order.

Despite being buffeted by remarkable political events, 2016 looks unremarkable in terms of our dispersion-correlation map. For the U.S., November’s spike in dispersion after the election was resolved by the end of December. Dispersion returned to below-average levels and, for all of 2016, dispersion and correlation essentially plot at the midpoint for the last 26 years. One would be hard-pressed to find a more nondescript point. It’s a very similar story in Europe, even though the U.K.’s exit from the European Union is a work in progress. In Asia, dispersion is lower than average while correlation is right around average.  Market dynamics can certainly change quickly, but dispersion levels suggest that adding value by active management will continue to be challenging.