When rates rise, bond prices fall. The math behind this basic bond equation is premised upon a security’s fixed coupon payment. However, with a floating rate instrument, coupons are not fixed — they rise and fall based on an underlying benchmark, typically resetting every three months based on 90-day Libor. As a result, two things happen.

The rate path remains far from clear, but recent upward pressure on yields may have investors looking to decrease their interest rate exposure. Floating rate structures offer investors the opportunity to participate in, rather than fall victim to, a rising rate environment.
1 Source: Bloomberg as of Nov. 23, 2015

Since the introduction of ETFs, the dynamics of investing has changed dramatically. Apart from being more transparent, with lower costs and improved tax efficiency, ETFs have helped create the opportunity for smaller investors to access asset classes previously available only to institutional investors. Emerging markets tend to be riskier than developed markets, but can also offer diversification opportunities. With emerging market ETFs, it has become possible to incorporate the objectives and constraints of investors who desire exposure to emerging markets in their portfolio construction process. Among emerging markets, India has been one of the preferred countries. The assets under management (AUM) and the number of the ETFs that provide exposure to India have increased tremendously. All of these ETFs are based on Indian equities. As of July 2015, there were 27 of them, with combined AUM of USD 12.80 billion, domiciled across seven countries (see Exhibit 1). The U.S. has been the greatest contributor in terms of both AUM and the number of ETFs, followed by France, Singapore, and other countries. Since August 2015, the combined AUM has decreased by more than USD 2.27 billion, amounting to a decline of almost 18%, and it stood at USD 10.53 billion as of September 2015. This reduction in AUM has also contributed to the volatility of the equity market and the exchange rate in India.

Source: Morningstar. Data as of Sept. 30, 2015. Chart is provided for illustrative purposes.

As opposed to the international Indian ETFs, India’s domestic ETFs are not only limited to equities. They also include commodities, fixed income investments, and money markets (see Exhibit 2). As of September 2015, the total number of domestic ETFs was 51, and the combined total AUM stood at USD 2.09 billion. The proportion of domestic equity ETFs in the combined total AUM was almost 48%, at USD 1.00 billion as of September 2015. The AUM of the domestic equity ETFs in India account for just 10% of that of the international equity ETFs that provide exposure to India. The recent rise in AUM of India’s domestic equity ETFs can be attributed to the introduction of the Central Public Sector Enterprise (CPSE) ETF, as well as the investment by the Employees’ Provident Fund Organization (EPFO). The Central Board of Trustees (CBT), the apex decision-making body of the EPFO, has recently decided to invest in India’s domestic equity ETFs within the prescribed limit of 5%-15% of the total corpus.

Source: Morningstar, Association of Mutual Funds in India and Reserve Bank of India. Data as of Sept. 30, 2015. Chart is provided for illustrative purposes.

The S&P BSE SENSEX, India’s heavily tracked bellwether index, is designed to measure the performance of the 30 largest, most-liquid, and financially sound companies across key sectors of the Indian economy. As of September 2015, it has served as the underlying index to one international equity ETF, which provides exposure to India, and five domestic Indian equity ETFs. Over the past 10 years, ending in September 2015, the S&P BSE SENSEX has yielded an annualized total return of 13.32% in Indian rupees (see Exhibit 3). Apart from domestic Indian equity ETFs based on other indices, the EPFO will also invest in the domestic S&P BSE SENSEX ETF, leading to expectations of a further boost to the AUM of this established index.

Source: S&P Dow Jones Indices. Data as of Sept. 30, 2015. Chart is provided for illustrative purposes. Past performance is no guarantee of future results.

This morning’s Wall Street Journal interviews Peter Lynch, the legendary and erstwhile manager of the Fidelity Magellan Fund, who, unsurprisingly, turns out to be an advocate of active equity management.  “People accept that active managers can’t beat the market and it’s just not true,” says Mr. Lynch, who certainly did beat the market in his day.

Otherwise said: suppose two new portfolio managers take over new funds this year, and after four years one is outperforming her benchmark while the other is underperforming.  Which of the two do you think has the better chance of making it to year five?  The Fidelity statistic is a classic illustration of survivorship bias.  When we control for survivorship, as in our SPIVA reports, the majority of active managers underperform most of the time.

What is true across the population of active managers does not mean that individual managers cannot be exceptions.  Indeed, Peter Lynch is famous precisely because his performance was exceptional.   If most active managers could outperform consistently, we wouldn’t celebrate the few who do.

As the Puerto Rico municipal bond saga continues it may be helpful to look at how other distressed municipal bonds have performed through Friday December 4th 2015.

The S&P Municipal Bond Default Index tracks municipal bonds that have entered default by not paying all or part of the promised principal or interest when due.  It currently tracks over 250 bonds with a par value of over $5.4 billion.   Within the index there are several sectors which have historically had the majority of defaults take place.  Those sectors are the  land backed, health care, corporate Backed and multifamily sectors. 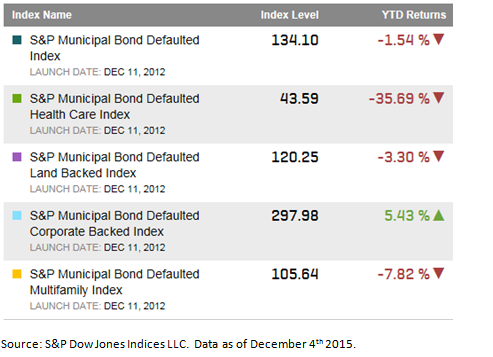 So far, the S&P Municipal Bond Default Index is in negative territory with a return of -1.54%.  Corporate backed municipal bonds have seen a positive return of over 5.4%.  Smaller sectors such as the health care and multifamily sectors have seen significant negative results with health care bonds being crushed by over 35% in 2015.

If and as the Puerto Rico bonds default it can be expected that they will be added to the S&P Municipal Bond Default Index during a monthly index rebalancing and if they do they may have a significant weight in this index.