In the past 12 months, the S&P GSCI All Crude has lost almost 50% and has moved to the forefront of macroeconomic forces impacting the global economy. In the context of history, today’s oil price drop is not unprecedented in magnitude or duration as you can see in the chart below. 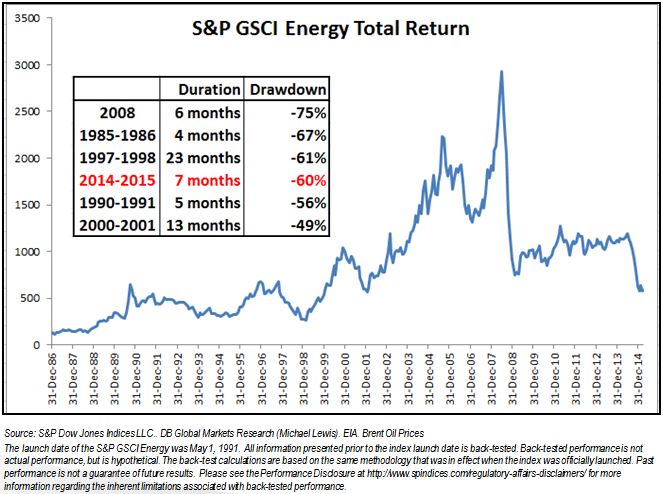 In fact, there has been a comparable oil price drop every five ten years that could be blamed on a demand crisis or a flood of supply – or some combination of the two. The gold:oil ratio that represents how many barrels of oil it takes to buy an ounce of gold is also telling a story about a supply driven drop. The very high gold:oil ratio now is clearly driven by the oil drop whereas gold has maintained its value. If oil prices remain low versus gold for an extended period of time, as was the case in the 1986 period, the elevated gold:oil ratio may indicate that the energy production boom (whether U.S. or Saudi Arabia) is much more responsible for oil’s price collapse than fears of global deflation, lack of demand, and recession.

Back then, oil prices had been stable at historically high levels of $30/bbl for nearly three years from 1983-1985 that resulted in weak demand and strong non-OPEC production growth. That drove OPEC to flood the market with oil in order to maintain market share rather than support prices. The result was oil prices collapsed to $10/bbl within 8 months. Notice in the graph below that superimposes today’s oil price on the 1985-1986 graph where the pre-crisis shows elevated oil prices to the left of the black line and the drop is to the right of the black line: 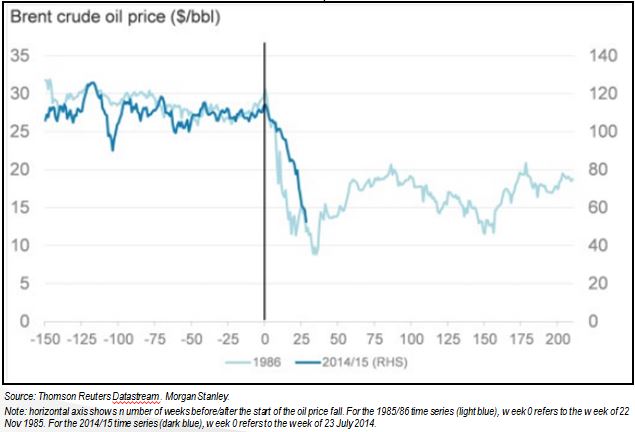 The similarity is clear and these conditions seem to be in place again today.  The Oil Market Report (OMR) by the International Energy Agency stated oil price pressure in March was due to sharply higher supplies from Middle East OPEC producers, recording its highest month-on-month gain in nearly four years, despite a relentless build in US crude.

The big question that is weighing on analysts is about how the oil price drop is impacting the economy today. A helpful chart by Blackrock shows the incremental GDP impact from oil at $50/bbl as seen below where the green countries benefit and the blue countries lose: 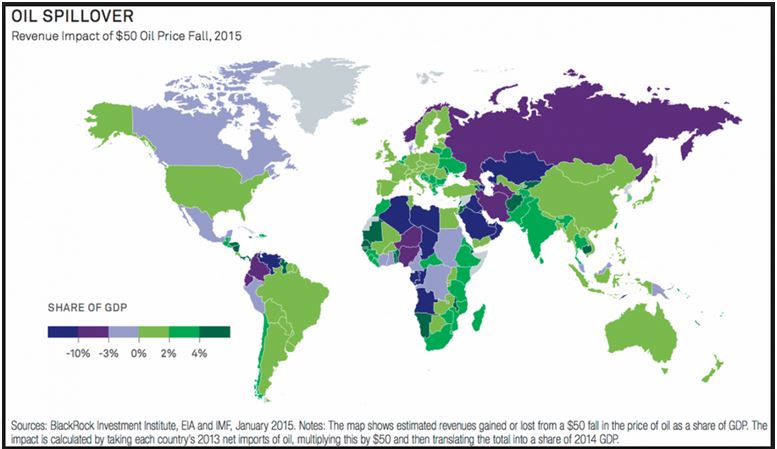 The winners and losers are divided by oil producers, importers and country specific policies. That seems fairly straightforward, but the oil economics are on a slippery slope right now as evidenced by the frequency and magnitude of recent GDP growth forecast changes. In just the first two months of the year Deutsche Bank had already made major changes to its global markets and economic forecasts because the markets were moving much more quickly than anticipated in response to lower oil, deflationary pressures, and a litany of unexpected central bank policy changes. In the chart below, DB illustrates the world GDP growth divided by large oil producers and other countries, and circled in red/green are big downward/upward revisions. 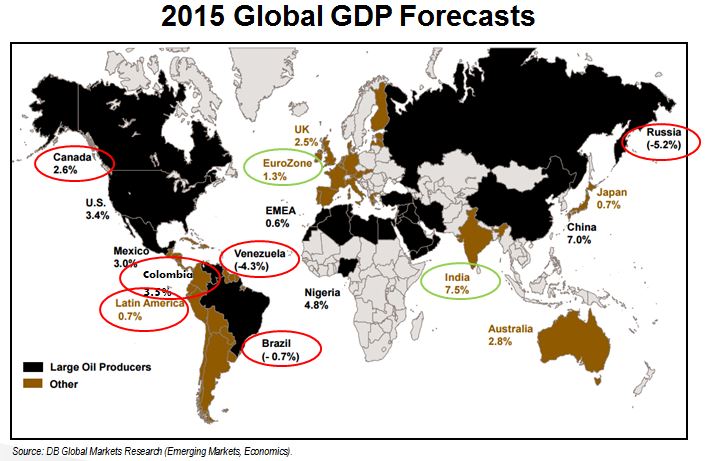 Since oil has become a major macroeconomic factor and a key input to support GDP growth, but is currently is hard to predict, GDP growth is also uncertain. Key factors that may influence the oil price going forward are the effects of capital expenditure cuts in 2015, geopolitical risks, possible stagnation in Europe and Japan and production decisions by OPEC. If oil prices stabilize near current levels, then credit risk may increase causing assets to shift based on Fed actions like in the risk-on risk off environment post the global financial crisis. Given our economy is still in a post-global financial transition, it is highly sensitive to these factors.

According to the OMR, recent developments may drive more uncertainty about the supply and demand responses. Stronger-than-expected 1Q15 demand might signal a faster recovery – as would a faster-than-expected decline in North American unconventional supply. However, there may be a slower recovery if pockets of demand strength prove short-lived and lead to weaker deliveries later on. Geopolitics further call into question past working assumptions on future output, but may already have encouraged some producers to hike supply to stake out market share ahead of possible lifting sanctions. All in all, that suggests the market rebalancing may still be in its early stage.

One area of agreement in a world divided by oil importers, exporters, developed and emerging countries is there is an opportunity for energy reform from the oil price drop despite policy differences. Oil importers may benefit from the savings from the removal of energy subsidies that may be used to lower budget deficits and to increase public infrastructure. Developed economies may enjoy a boost to demand from the oil price drop but more monetary policy may be needed to prevent real interest rates from rising, especially if there are further declines in inflation. Infrastructure investment may help the need to support the recovery and long-term growth in these countries. On the other hand, macroeconomic policy to support growth remains limited in emerging markets, but in some cases, lower oil prices may alleviate inflation pressure and external vulnerabilities, thereby allowing central banks not to raise policy interest rates or to raise them more gradually. Some oil exporters may need to strengthen their monetary frameworks to avert the possibility that depreciation will lead to persistently higher inflation and further depreciation.

Tagged:
GDP, jodie gunzberg, oil, S&P GSCI
The posts on this blog are opinions, not advice. Please read our disclaimers.