Yields on the 10-year Treasury continued lower last week as measured by the S&P/BGCantor Current 10 Year U.S. Treasury Index.  Friday’s 2.59% is one basis point off from this year’s low of 2.58% of February 3rd.  The index recorded a 2.59% in spite of the fact that the April U.S. Unemployment rate reached a low of 6.3%, a level not seen since 2008.  The Ukraine crisis and the Fed’s near zero interest rate policy continued to keep yields low.  Wednesday’s conclusion of the FOMC meeting resulted in continued stimulus reduction and stating growth in economic activity has picked up recently after being effected by the harsh winter conditions.

Domestic economic news will be quieter than weeks past as the calendar is light.  Today’s Markit U.S. Services PMI was slightly higher at 55 (54.5 expected).  Treasuries sold off on the news after having been higher from news of weakness in China’s manufacturing sector.  March’s Trade Balance is scheduled for tomorrow while MBA Mortgage Applications (-5.9% prior) is due on Wednesday.  Initial Jobless Claims (325k expected) and March’s Wholesale Inventories (0.5% expected) will close out the week.

So far 2014 is off to a good start for investment grade corporates.  The S&P U.S. Issued Investment Grade Corporate Bond Index has not had a down month yet and has returned 0.45% for May.  Year-to-date this index has returned 4.54%, 80 basis points more than high yield.  All industry sectors except for catalog retail are contributing positively to the index with the top performing sectors being electric utilities, diversified banks and integrated telecommunications.

The S&P U.S. Issued High Yield Corporate Bond Index has returned 0.08% so far for May after having returned only 0.67% for the month of April.  To date, the best performing month has been the 1.92% in February.  Year-to-date high yield has returned 3.74%.

The tone in the market improved over the past week as the S&P/LSTA U.S. Leveraged Loan 100 Index has returned 0.19% month-to-date and 1.33% year-to-date.  Last week the long-anticipated bankruptcy filing of Energy Future Holdings (formerly known as TXU) occurred.  The S&P/LSTA U.S. Leveraged Loan 100 Index holds two loans which accounted for a 0.03% weight within the index.  The loans will remain in the index though not contribute to its yield measures.

The S&P U.S. Preferred Stock Index [TR] so far has returned 0.21% for May and year-to-date has returned 9.15%.  Like investment grade corporates, this index has not had a losing month this year.  January and February were well above 2% while March and April both returned 1.8%.  Longer duration issues in positively performing names such as Royal Bank of Scotland, American Homes and General Electric have increased the returns of this index.

In the weekend Wall Street Journal (May 3, 2014) there is an informative article entitled “The Risks of Floating Rate Funds”.  The article does a great job of delving into the risks of these types of structures and is quite timely as the low rate environment continues. The investor appetite for floating rate assets while facing the prospect of future rising interest rates is a fascinating topic. The goal of this blog is to add some information in to the discussion.

The volatility of the senior loan asset class is an important topic.  There certainly was a volatile time period during 2008 and 2009 for the financial markets.  The S&P/LSTA U.S. Leveraged Loan 100 Index tracking the senior loan market saw a dramatic decline in value in 2008 of just under 28%.  It may be valuable to also consider the environment and compare that drop in value to other asset classes during that time period: the S&P 500 Index was down over 46%, the S&P GSCI was down over 67% and high yield corporate bonds were down over 30%. During the twelve month period of ending April 2014 the senior loan market experienced a maximum decline of 0.9% while the other markets have experienced larger negative swings. 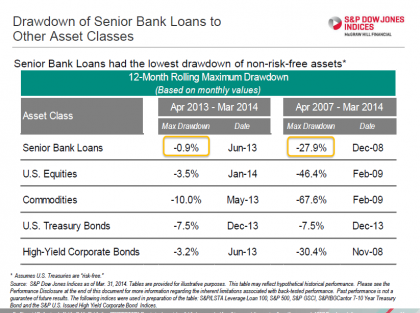 Echoing an important point raised in the Wall Street Journal article is the aspect of interest rate ‘floors’. During this low rate environment the interest rate paid out by many senior loans has been held to minimums or ‘floors’.  The interest rate of these floating rate loans are tied to benchmark rates, typically LIBOR, that have dropped significantly.  As of year end 2013, approximately 80% of the loans in the S&P/LSTA U.S. Leveraged Loan 100 Index have some type of interest rate floor.  For the interest rate on those loans to rise the benchmark rate, LIBOR, needs to rise to a point where the rate (LIBOR plus spread) breaks through that minimum rate or the ‘floor’ of these loans.  The key aspect of this is when the rate does rise enough to be above the interest rate ‘floor’ the lenders get the benefit of a rising rate. Meanwhile, the loans with floors are earning above market yields due to the ‘floor’.

There are many other aspects of risk and reward related to the senior loan and high yield corporate bond markets that can be discussed in additional posts. 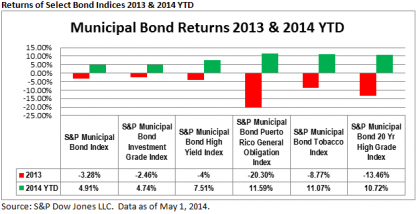 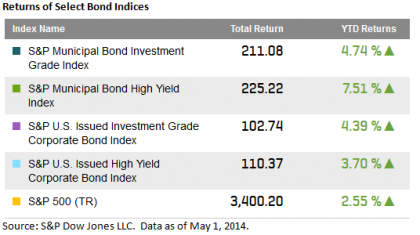