Tesla: Not an Automatic Addition to the S&P 500 ESG Index

So Different Yet So Alike… 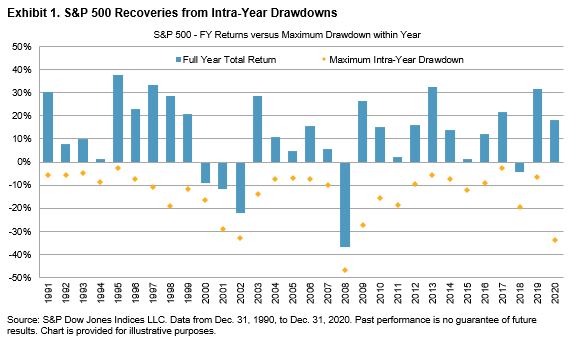 Decrement indices have gained popularity as the underlying assets of equity-linked structured products in Europe and Asia. According to SRP, among the 318 products across asset classes in France that matured or autocalled between April 2018 and March 2019, more than 32 were linked to decrement indices.1

One of the reasons behind this recent popularity is today’s low interest rate environment, which makes it challenging for structured product issuers to design attractive products. This triggered a search for a new underlying asset that could deliver cheaper optionality. Decrement indices were designed for this purpose. By eliminating dividend risk, issuers could provide more favorable terms at the structural level, such as higher participation rates and improved capital protection.

It is important to understand that the gain on favorable product terms does not come without cost. Exhibit 1 illustrates some of the tradeoffs for structured products linked to decrement indices compared with conventional indices. To understand the risk for the underlying index, it is worthwhile to look at the construction of decrement indices. 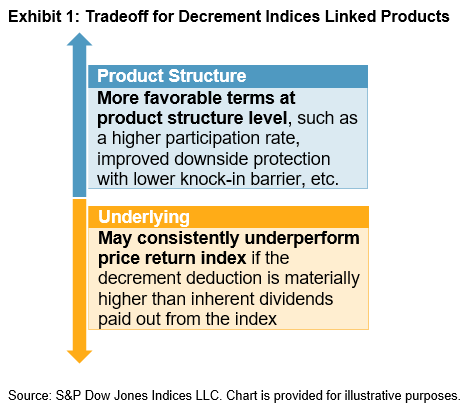 How Do Decrement Indices Work?

When the market is stable or steadily increasing, decrement indices tend to be more beneficial to investors compared with the price return index. In adverse market conditions, however, it is important to acknowledge that decrement indices may represent a large reduction in returns.

Decrement indices use two major methods to deduct the predefined dividends: fixed percentage or fixed points. On a daily basis, the former deducts a fixed percentage of the returns while the latter subtracts fixed index points from the index level.

On the other hand, a fixed points deduction captures the consistency in dividend amounts in the short term, as companies are inclined to maintain more stable dividend policies compared to their earnings. For fixed points decrements, the effective percentage deduction on the index base date, which is calculated by fixed points divided by initial index level, is usually set to be consistent with the recent realized dividend yield.

The decrement strategy is an index innovation that aims to solve specific challenges presented by structured products—–a low interest rate environment and the need to hedge dividend risk. Despite the simple construction, there are nuances that market participants may want to better understand, such as potential underperformance when deduction is too high and varying deduction methods. For more information on the S&P Decrement Indices, please refer to the “Fee Indices/Decrement Indices” section of the Index Mathematics Methodology document, as well as the S&P Dow Jones Decrement Indices Parameters.

Tesla: Not an Automatic Addition to the S&P 500 ESG Index 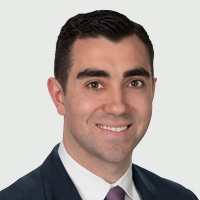 The main driver of whether a company is selected to join the S&P 500 ESG Index is its S&P DJI ESG Score. This score is derived from the annual Corporate Sustainability Assessment (CSA), which is administered by SAM, a part of S&P Global. The CSA is a highly granular, industry-specific questionnaire based on financial material ESG metrics. Insights gathered from the CSA form the backbone of the ESG score that is used to select companies added to the S&P 500 ESG Index. 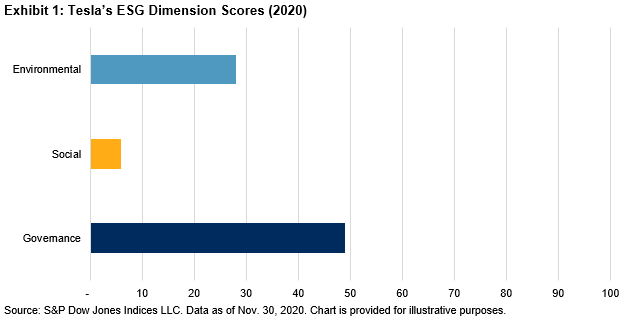 For this current assessment year, Tesla’s S&P DJI ESG Score was 22 out of 100, up 8 points from 2019’s score. This is driven by its ESG Dimension Scores, including an Environmental score of 28 (up 1 point from last year), a Social score of 6 (up 2 points), and a Governance score of 49 (up 21 points). Tesla does not fill out the CSA, so its S&P DJI ESG Score is determined based on research using publicly available information. 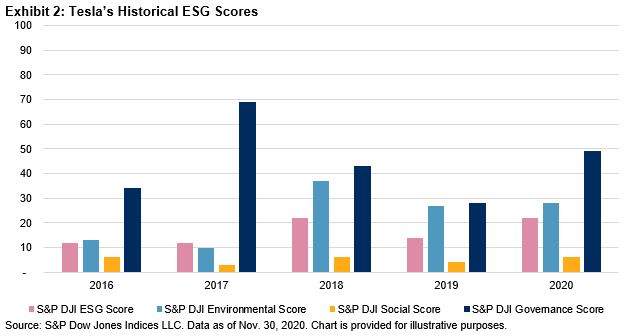 Many may be surprised to see such a low overall ESG score (and Environmental score) for Tesla, given its focus on electric vehicles. Specializing in “green” products, however, does not automatically ensure that companies will score well from an overall ESG perspective. The S&P DJI ESG Score is wide ranging in what it encompasses, as it is meant to capture a company’s broad sustainability performance.

In the Environmental dimension, Tesla of course scored well in the area of low carbon strategy, with a nearly perfect score of 99. However, the company scored low in environmental reporting, climate strategy, and environmental policy and management systems, which suppressed the company’s overall Environmental score.1 Tesla also scored especially low on social metrics across the board, which include human capital development, social reporting, and labor practice indicators. Tesla did comparatively well in the Governance realm, especially relative to the prior year.2

So, what does this mean for Tesla’s standing in the S&P 500 ESG Index? We won’t know until the upcoming annual rebalance is finalized on the last business day of April 2021. At that time, Tesla will be measured against its peers across many ESG criteria. As mentioned earlier, however, the biggest determinant of the composition of the S&P 500 ESG Index is a company’s S&P DJI ESG Score. But it’s not just a company’s absolute performance that matters; a company also needs to rate well relative to its peers.

The S&P DJI ESG Score is used in two ways in the index methodology. First, the bottom 25% of companies in each GICS® industry group is screened out on a global basis. This prevents a company that is a good ESG performer locally but poor on a global basis from making it into the index. Second, companies are ranked by their ESG score within the S&P 500 and then selected from the top down to get as close as possible to 75% of the industry group’s original market capitalization.

Will Tesla make it through these two key screens and become a member of the S&P 500 ESG Index? Next April, we’ll know. The S&P 500 ESG Index has no early-entry rule that would afford Tesla extra privileges; it will be treated the same as any other company.

1 According to the CSA, low carbon strategy (which is a unique criterion to the automobiles industry) is defined as an assessment of strategies implemented by companies to reduce the carbon intensity of their core portfolio, while climate strategy is defined as an assessment of strategies put in place by companies to address the scale of the challenge climate change represents for their industry, and environmental policy and management systems covers management tools implemented by companies in order to improve their environmental performance in a cost-effective way and reduce the risk of incurring fines or penalties for not complying with environmental legislation.

2 To provide some context for Tesla’s scores, the S&P DJI ESG Scores are normalized across global industries and are designed to be read as percentiles. Thus, a score of 22 means that that company had a higher score than 22% of its industry peers globally.

So Different Yet So Alike…

To say that the world is different now than it was a year ago would be an astounding understatement. COVID-19 brought about once unimaginable conditions and changes. In the financial realm, market volatility spiked and remains markedly higher across all sectors compared to the beginning of 2020. Yet, observing the market based purely on performance, it would almost seem as if all was normal. The S&P/TSX Composite Index, after March’s blip, is up 6.8% through Dec. 17 and continuing its uptrend heading into the new year.

The changes in latest rebalance of the S&P/TSX Composite Low Volatility Index, effective after the close of trading on Dec. 18, 2020, were predictably small based on the changes in sector volatility in the last three months shown in Exhibit 1. The index shifted 2% of its weight away from Health Care and Information Technology, while shifting the most weight into Utilities and Industrials. There were only three name changes.