How is the Current Environment Impacting Your Retirement? 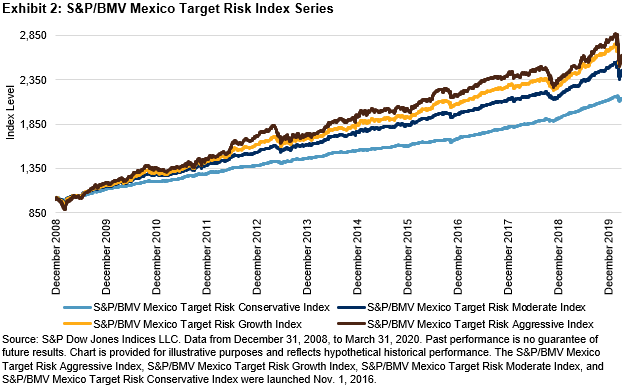 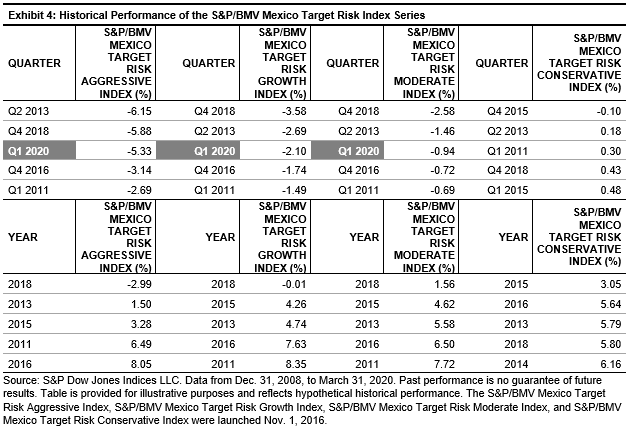 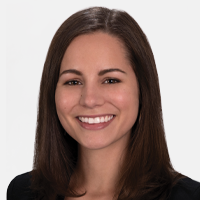 In February 2020, S&P Dow Jones Indices (S&P DJI) and the Association of Mexican Insurance Companies (AMIS) conducted the second annual survey of insurance investment officers in Mexico about the state of the local insurance industry. While this survey was meant to help take the pulse of the Mexican insurance market, what we did not predict was that shortly after the survey concluded, the Mexican economy would feel the combined shocks of COVID-19 and lower global oil prices.

We recently published the results of this survey to highlight the perspectives of the insurance investment officers at a point in time, with the recognition that this survey assumes relatively “normal” market conditions, and importantly, these are now no longer “normal” market conditions. With that in mind, we want to highlight some of the changes that have already taken place during the past month.

On March 26, 2020, S&P Global Ratings lowered its local and foreign currency ratings on Mexico to ‘BBB+’ from ‘A-’ and to ‘BBB’ from ‘BBB+’, respectively. In line with this downgrade, on March 27, 2020, S&P Global Ratings also lowered its ratings on several Mexican insurance entities whose investment portfolios had a significant portion of sovereign debt (the details of which are outlined in this report). 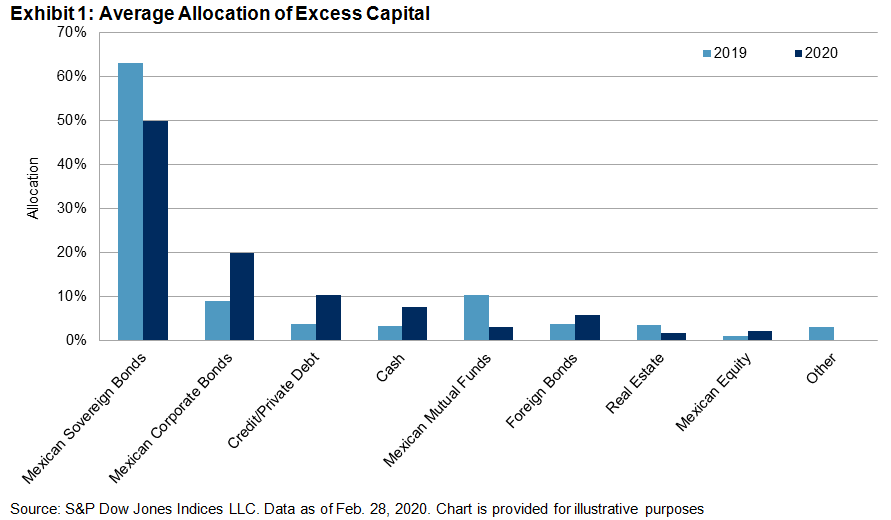 At the time of the survey, more than 20% of respondents said they expected to decrease allocations to Mexican sovereign bonds. Given the current market conditions and ratings outlook, it is likely that this percentage would be much higher today.

As my colleague María Sánchez noted in her recent blog post, the Mexican peso was the Latin American currency most affected in March 2020, with a depreciation rate of 16% relative to the U.S. dollar. Still, the peso remains a highly liquid currency.

Separately, 17% of respondents said they expected to decrease their allocations to cash. Again, it is likely that this percentage would be higher given today’s market conditions.

Join us for a webinar on May 6 where representatives from S&P DJI and S&P Global Ratings will discuss the impact of COVID-19 and how insurers can get ahead of the headwinds facing the local insurance market. A replay of the webinar will also be available at the same link.*

*The webinar will be in Spanish.

I was recently asked whether volatility was particularly challenging for index fund owners or for active investors.  The answer is “yes.”

For index funds, the challenge arises because rising volatility typically accompanies poor returns.  Between 1991 and 2019, e.g., months in which the S&P 500’s volatility was above median averaged modestly negative total returns.  In contrast, when volatility was below median, monthly returns averaged 1.84%.  This is entirely sensible – a stock, after all, should be valued at the discounted value of its future cash flows.  In times of uncertainty, the discount rate rises, and prices fall accordingly.  If investors are less certain of the future, they’re inclined to pay less for it.

Passive investors, accordingly, are likely to find high volatility damaging to the value of their portfolios; other than “this too shall pass,” it’s difficult to find anything to say in mitigation.  For active investors, however, an interesting subtlety arises.

The ability of an active manager to add value depends most importantly on his skill level.  But it also depends on how much opportunity the market presents.  We can measure the level of opportunity by monitoring the market’s dispersion – i.e., the degree to which the returns of the stocks in a given index are close together or widely separated.  Dispersion and volatility tend to move up and down together – other things equal, the more disperse returns are, the more volatile the market as a whole will be.

For much of the past decade, dispersion has been well below its average level.  This is one of the reasons that active managers as a group have had such a difficult time outperforming passive benchmarks.  In March, however, both volatility and dispersion spiked upward.  We observe the same effect not only across global equity markets, but also when we measure dispersion across sectors, countries, and asset classes.

This means that the value added of a skillful (or lucky) active manager can be considerably larger in March 2020 than it would have been a year – or even a month – earlier.  For less skillful (or unlucky) managers, the potential magnitude of underperformance is similarly magnified.  In fact, preliminary data on first quarter performance note a widening gap between the top and bottom performing active managers.

How is the Current Environment Impacting Your Retirement?

Explore how our new quarterly dashboard on S&P STRIDE can help investors better understand and plan for retirement with S&P DJI’s Hamish Preston.

Get the latest dashboard: https://spdji.com/documents/commentary/dashboard-stride-2020-03.pdf.