While the market has had its fair share of news to digest this month – including U.S.-Iran relations, corporate earnings, and the signing of a so-called “Phase One” trade agreement between the U.S. and China – news of a virus spreading in China has taken a lot of the headlines.  Indeed, fears of contagion weighed on global equity markets this week, and the S&P 500 recorded a daily price decline of 1.57% on January 27th – its first daily price decline of more than 1% since October 2019 and ending its 10th longest streak (74 trading days) in the last 50 years without such a decline. 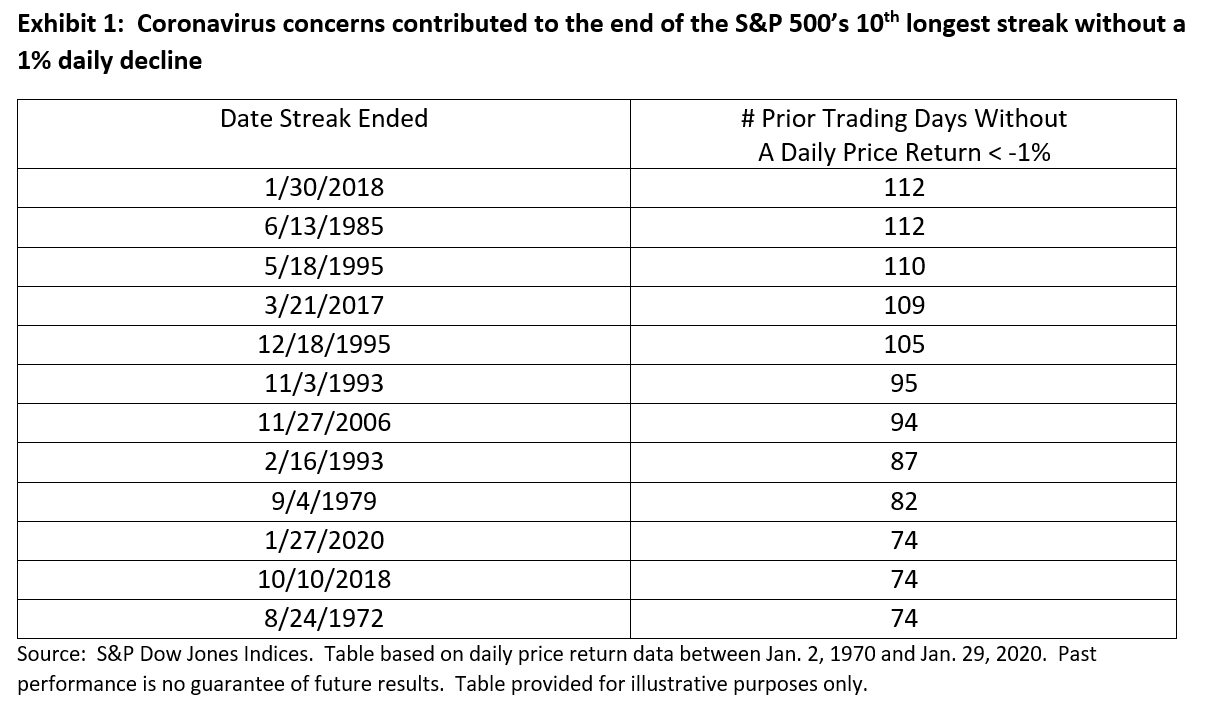 At a sector level, Utilities has been the best-performing large and mid cap sector, perhaps reflecting the bouts of unease observed at various points this month.  And in signs of some good news impacting the market, the Information Technology and Communication Services sectors benefited from several strong earnings reports.  At the other end of the spectrum, Energy was by far the worst performing sector this month as a decline in oil prices provided headwinds: the S&P GSCI Crude Oil Index is set for its worst monthly total return since May 2019, down 12.47% as of yesterday’s close. 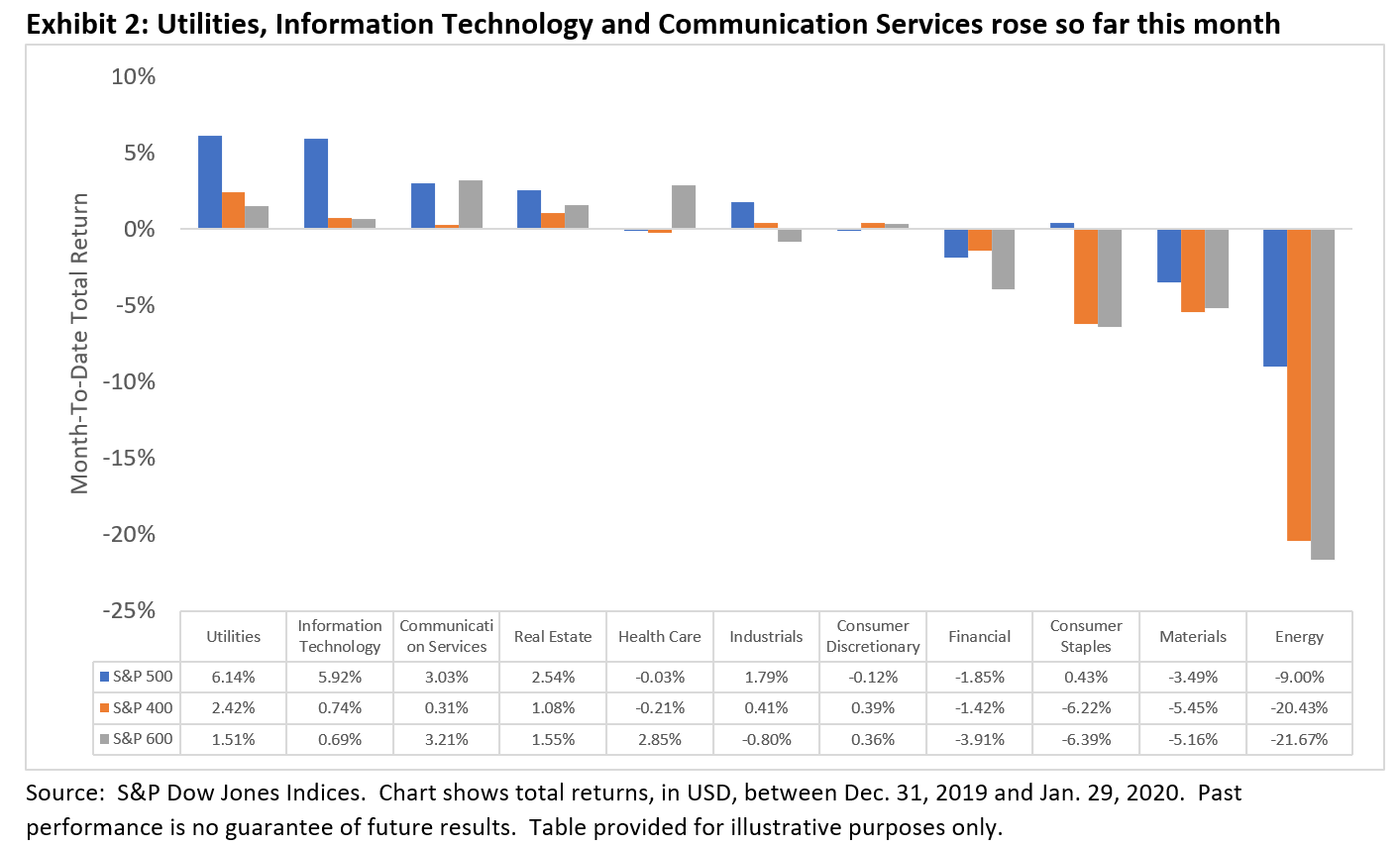 More broadly, and in large part because of Energy’s woes, there was a sizeable difference between the best- and worst-performing U.S. equity sectors this month.  For example, the 15.14% separating the best-performing S&P 500 sector (Utilities) and the worst-performing (Energy) is the largest monthly difference in large cap sectoral performance since October 2017. Similarly, the performance spread in S&P 400 sectors (22.84%) and S&P 600 sectors (24.88%) are the highest readings since September 2017 and September 2015, respectively. 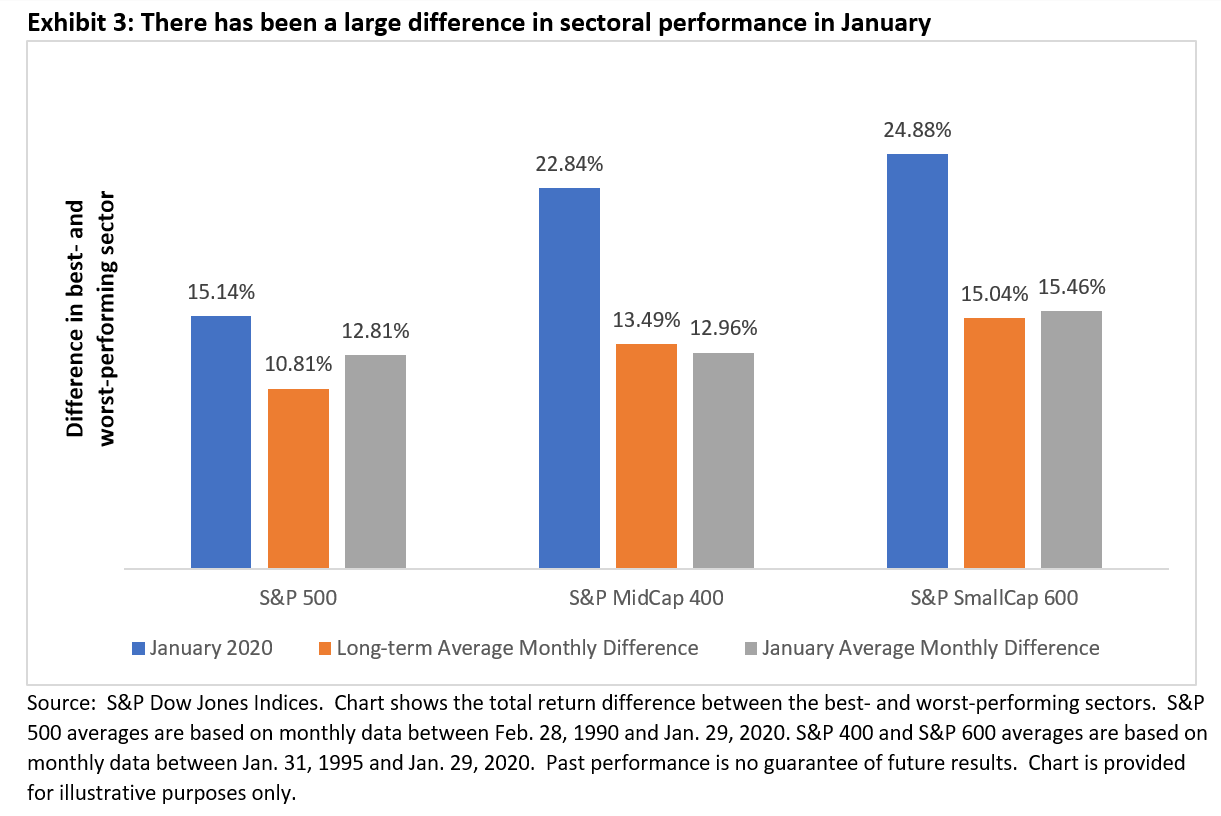 As a result, although it remains to be seen which trends will continue to dominate headlines and shape sentiment – and caution should be taken when using January’s performance to try and predict subsequent returns – the performance of U.S. equities in January highlights the potential for sizeable divergence in returns based on idiosyncratic reactions to news.  Incorporating sectoral views may therefore be useful when navigating market movements.

For monthly updates on our indices, sign-up for our monthly dashboards here.