Over the past decade, the combination of low interest rate environments and shifting demographics has made income-focused investment strategies extremely popular. In constructing an income-producing equity index, the dividend yield of a security serves as a key criteria for eligibility and security selection.

To examine dividend payment behaviors in different markets, we used S&P Global BMI companies, broken down by region (see Exhibit 1). In the developed Asia Pacific market, many countries chose to pay dividends semiannually, with the exception of South Korea where nearly 75% of the companies paid dividends once a year. In the emerging Asia Pacific market, there was no typical dividend payout pattern, with the exception of Taiwan where 92% of companies paid dividends annually.

In Europe, more than half of the countries paid dividends once a year, but the dividend payments in the UK and Ireland typically occurred twice a year. In addition, a handful of European countries did not have a universal payout schedule. In Latin America, over 60% of Brazilian companies and 70% of Colombian companies paid quarterly dividends, but the overall payout schedule for the rest of Latin American countries was less clear. In North America, companies normally issued dividends on a quarterly basis, so the widely accepted industry practice in the U.S. and Canada is to use the indicated dividend yield. In contrast, the trailing dividend yield is commonly used for the rest of the markets or when comparing across regions.

Understanding the timing and consistency of dividend payments in different markets can potentially help market participants make informed decisions on which dividend yield is an appropriate metric to use. As we highlighted above, while companies in certain markets have stable dividend policies, companies in other markets have less reliable dividend distribution schedules. Therefore, the use of dividend yield measure should adapt to reflect the characteristics of the local equity market. 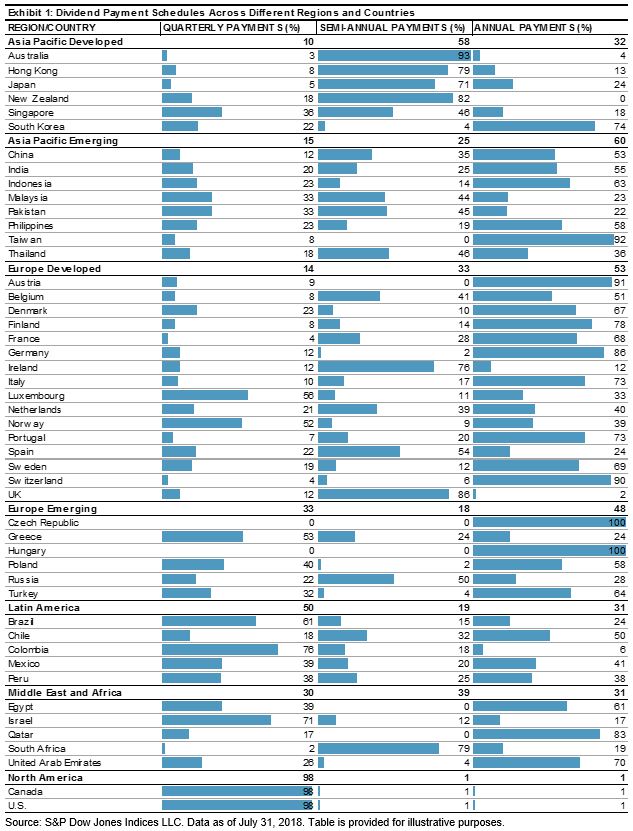 Small caps are outperforming large caps significantly in 2018, mainly from the tax cuts, growth,  strong dollar and concern about international trade.  This has driven the S&P 600 (TR) 8.4% higher than the S&P 500 (TR) (year-to-date through Aug.31, 2018,) measuring the 5th biggest small cap premium in history since 1995, and is the biggest since 2008, when it reached 10.2%.  However, the premium has narrowed to 6.9% in the first two weeks of Sep. and has sparked some debate over whether small caps can continue to outperform.

In at least one recent article, the author’s opinion is to avoid small caps for the rest of the year.  The reason is justified mainly since benchmark hugging becomes prevalent in Q4.  In order to lock-in gains relative to stated benchmarks for compensation purposes, portfolio managers outperforming  their market cap weighted benchmarks through the first three quarters are likely to sell overweights of smaller stocks and trade into larger stocks to match the benchmark.  On the flipside, if a manager’s performance is lagging the market cap weighted benchmark, the manager may also move toward benchmark weights to avoid the bottom and prevent getting fired. The article proves its point by using the most widely adopted small cap benchmark, the Russell 2000, to show small caps underperform large caps in Q4.

So, what happens to small caps that comprise an index that is only used as a benchmark by 3% of managers?

This seems to insulate the S&P 600 index from larger benchmark hugging problems evident in historical fourth quarter performance for small caps.  Using data since Q1 1995, the earliest available for the S&P 600, it has outperformed the S&P 500 in each quarter on average.  The premium is 0.03% in Q1, 1.57% in Q2, 0.12% in Q3, and 0.56% in Q4, making Q4 seem relatively attractive on average for small caps when using the S&P 600.  On average, 6 sectors delivered positive premiums in Q4, including utilities, financials, information technology, industrials, health care and real estate, so there may be opportunities in sector rotation strategies, especially into industrials, information technology and real estate that typically have negative premiums in the third quarter.

Another interesting observation is that when the small cap premium is positive in Q4, its premium is nearly double the positive premiums in other quarters. While on average the S&P 600 (TR) outperforms the S&P 500 (TR) by 0.6% in Q4, when the small cap premium was positive in Q4, it was 11.4%, which is much higher than the 4.0%, 6.9% and 6.4% observed during positive quarters, respectively, in Q1, Q2 and Q3.  Utilities, health care, industrials, real estate and financials were not only positive on average in Q4 but were also positive in Q4 in more than half the years.  Energy was also positive in Q4 more frequently than negative with an exceptionally large premium on average of 14.5%.

The conclusion is that small cap losses due to benchmark hugging in Q4 shouldn’t necessarily discourage investors from small cap indexing through the year’s end.  However, the split between the investable index and benchmark becomes ever more important for performance.  In the S&P 600 that is rarely used as a benchmark, performance is driven by the quality and fundamentals per sector such as the usage of utilities across other industries and its domestic focus – especially in small caps with 100% revenue from the U.S., or how small cap energy rises more than large cap energy from rising oil.

For more information about active versus passive performance in small caps, please visit our SPIVA report.  Notice 91% of small cap managers fail to beat the S&P 600 over a 5-year time period, a likely reason managers choose not to use it.  Also, please see our full report “Big Things Come In Small Packages” for a side by side methodology comparison of the S&P 600 versus the Russell 2000.  The quality screen in the S&P 600 is necessary to earn the small cap premium.

September is here. The entire Chilean investment community has been looking forward to this month for many reasons. For one, the transition of operations of the Chilean indices has been completed. S&P Dow Jones Indices (S&P DJI) is now the official index administrator of the Bolsa de Santiago’s indices. Secondly, the rebalancing and reweighting of many of the indices will be taking place in September. This means that many of the changes we previously announced will finally be implemented. Despite what appears to be a great disruption in the indices, the market overall seems to see these changes as a timely and positive step in the future development of the Chilean benchmarks.

Let’s be specific about what is happening in September. First, as previously announced, the indices will undergo their corresponding rebalancings or reweightings. What is the difference, you ask? A rebalancing, in the context of this document, refers to changes in the composition of the index, as well as the shares outstanding and float factors. A reweighting is an update of the weights, shares, and float factors. Normally, there are no changes to the composition of the indices during reweightings. Exhibit 1 shows all of the S&P/CLX Indices and their upcoming rebalancing effective dates. 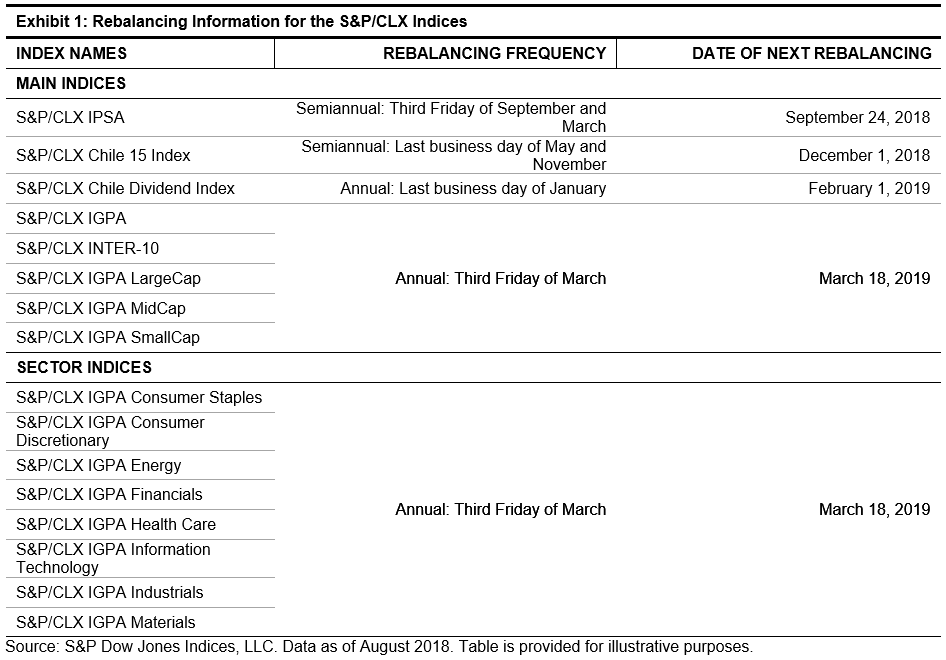 On Sept. 7, 2018, S&P DJI published the list of components for the S&P/CLX IPSA and their respective weights. These changes will be implemented after the close of business on Sept. 21, 2018. All of the changes previously announced that resulted from the public consultation conducted in April will be implemented. Based on the data published on Sept. 7, 2018, we calculated that the overall rebalancing turnover for the S&P/CLX IPSA is expected to be around 11%, one-way. However, the turnover not only considers the reduction of the index to 30 stocks from 40, but it also considers changes in the number of shares outstanding and in the float factors, which on average was reduced by 6% in the entire index. This resulted in changes to the float-adjusted market capitalization, which ultimately determines the weights.

The S&P/CLX IGPA will not have a full rebalancing, but it will have a reweighting. As mentioned, the composition of the index will not change at this time; however, all of the companies’ float factors and shares outstanding will be updated. Normally, this would not be a major event, since the changes during reweightings tend to be small, but this time the changes may be significant, particularly because the float factors are changing to align with S&P DJI policies and practices.

Besides the S&P/CLX IGPA and the S&P/CLX IPSA, the S&P/CLX INTER-10 and the size and the sector indices will also undergo share and float factor updates in September 2018. This ensures data consistency across all the core indices. Exhibit 2shows the structure of the new index series, with the S&P/CLX IGPA as the headline index. Stay tuned to see the development of the S&P/CLX Indices as we work closely with the investment community to launch new strategies that will measure the different aspects of the Chilean market. 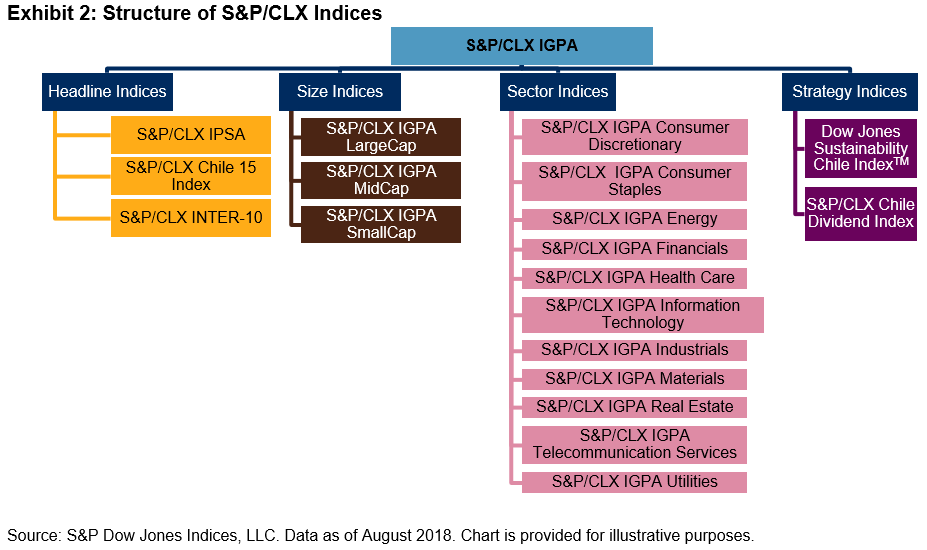 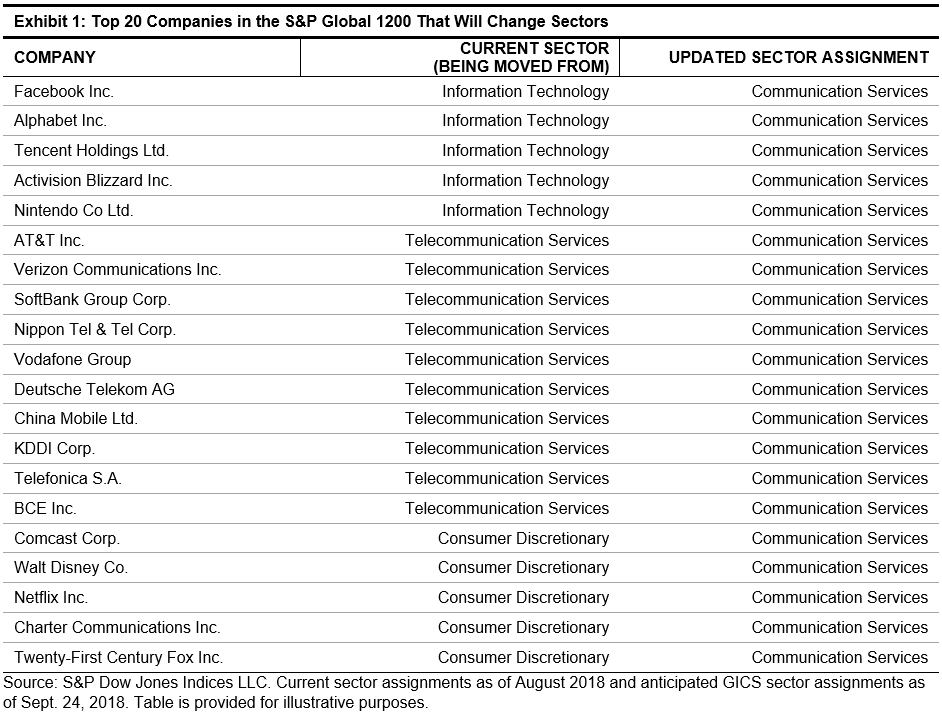 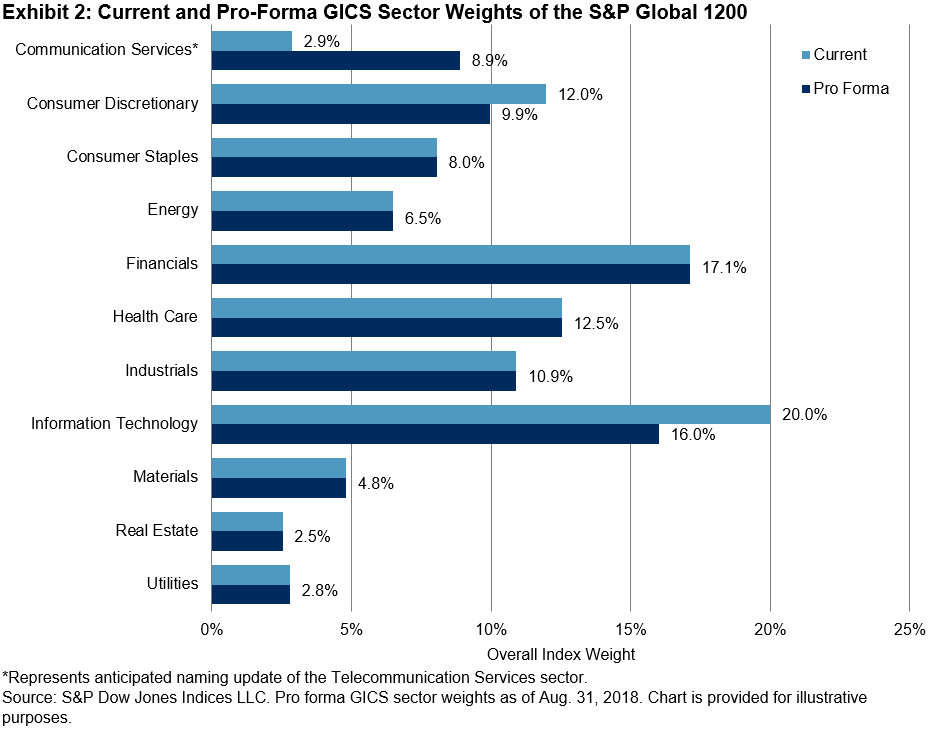 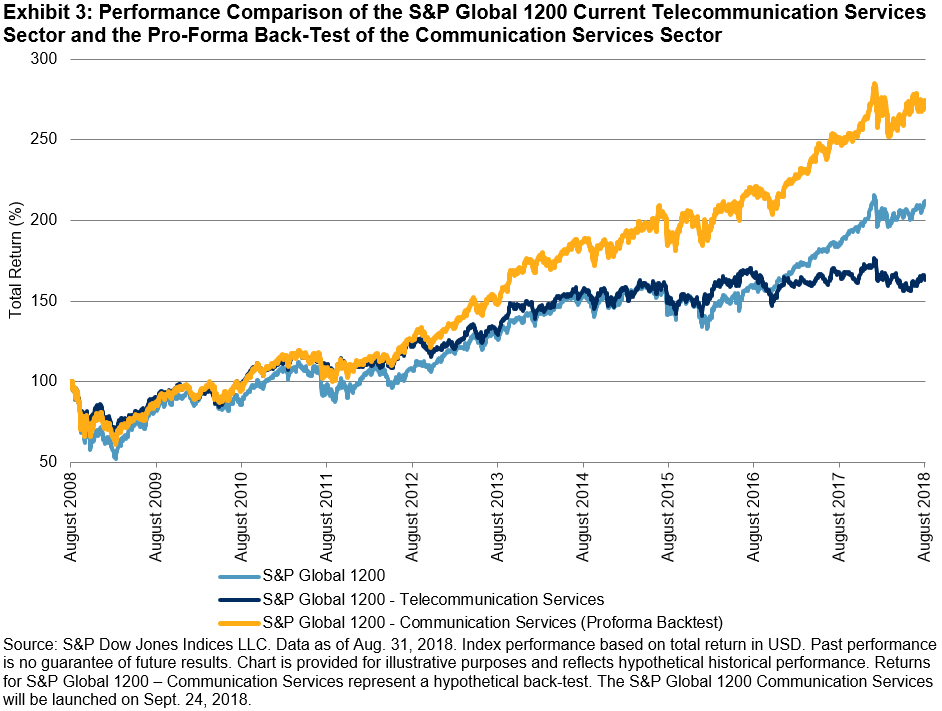