After the Central Economic Work Conference (CEWC), specific plans and targets have been set for China’s economy. What are the investment opportunities followed the CEWC?

To achieve high-quality development, the government will promote consumption and private investment to drive growth. Rural reform targeting to alleviate the poverty such as restoring land use rights to farmers could also unlock rural land wealth of US$20trn and hence boost rural consumption.

The government has recently selected 31 central and local SOEs as the third batch of the mixed ownership reform pilots program. SOE reforms, especially SASAC (State-owned Assets Supervision and Administration Commission of the State Council) reform, will accelerate in 2018.

New energy and eco-friendly firms will gain from anti-pollution initiatives. “China going green” is a government-led initiative for investment in the medium term. Investment in rural infrastructures (roads, access to water, power and Internet, etc.) and industries will likely emerge as a new growing area of fixed asset investment.

S&P China 500 Index consists of 500 largest and most liquid Chinese companies listed globally. It covers almost all the potential China-related investment opportunities. Broad based strength in Chinese equities propelled the S&P China 500 to a 44% total return for the year of 2017. The index had notably consistent performance during the year as well recording positive returns in all 12 months. 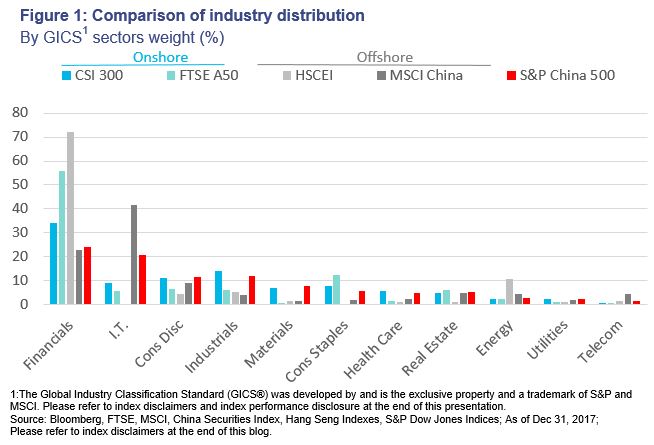 Benefited from its diversification in markets and sectors exposure, S&P China 500 has demonstrated better risk-adjusted returns (Figure 2). During the period from 31 Dec, 2008 to 31 Dec, 2017, the S&P China 500 generated an annualized return of 13.0% and Sharpe ratio of 0.59, both are the highest among the major China indices. 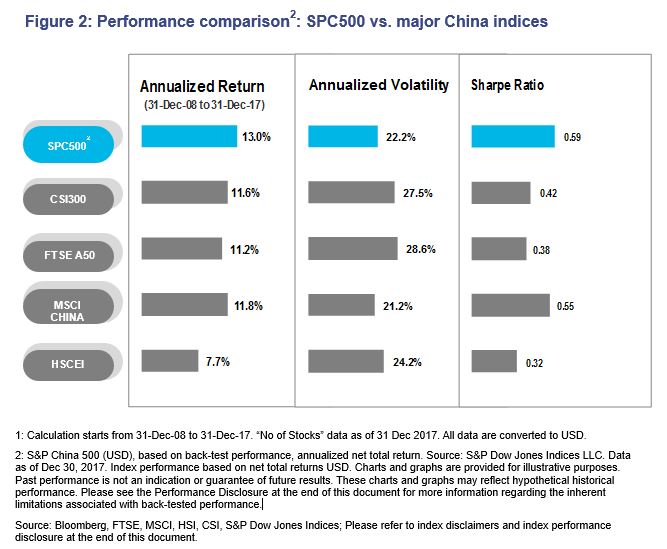