Advance estimates of US retail sales for December 2017 displayed vibrant year-over-year growth of 5.64%, according to the US Census Bureau.1 The most recent report, released on Jan. 12, covers sales ex-food, automobiles, gasoline and building materials. December sales growth was at its highest level since peaks in 2011 and 2014, and was above the trend seen since early 2011 — further highlighting strength in consumer activity. 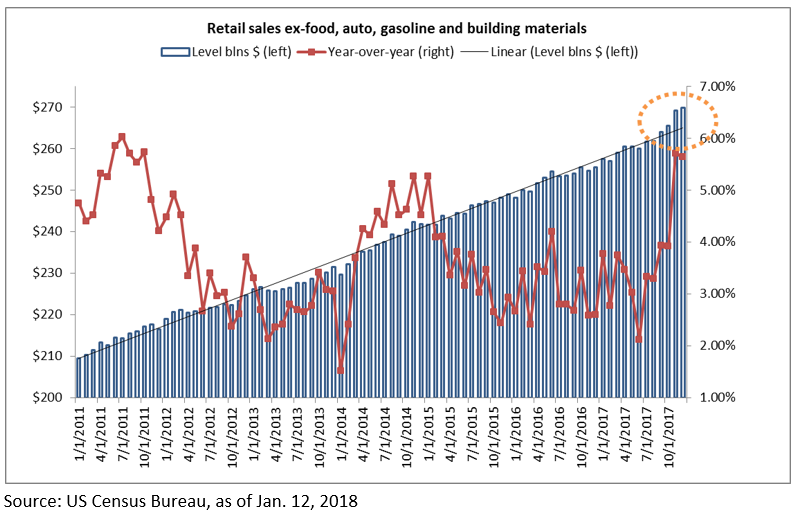 Looking forward, I believe that strength in consumer spending is likely to be underpinned by the recently passed federal tax cut, dubbed the Tax Cut and Jobs Act. (Harsh winter weather may be a caveat, however.) In fact, a number of companies have already announced employee bonuses and higher wages in the wake of this legislation.

Robust consumer spending is typically a friendly factor for the equity market, and may provide a reason to maintain equity exposure, in my view, despite high equity valuations seen over the past year and the lack of any significant market correction. On a total return basis, the S&P 500 Index closed higher in every month of 2017, while its forward price-to-earnings (P/E) ratio is at 18.6 — a level last seen in the technology bubble of the early 2000s.2

Investors who want to gain exposure to high-quality companies that can benefit from higher consumer spending may want to consider the quality factor. Consider, for example, that the S&P 500 Quality Index has 27% exposure to the consumer-focused sectors, with 12% of its holdings in consumer discretionary shares and 15% in consumer staples.2 Although the consumer staples sector can at times be viewed as defensive, this isn’t always the case. Consumer staples holdings within the S&P 500 Quality Index include Costco and Walmart, which are both influenced by consumer spending.

Other key exposures rest in industrials (23.5%) and information technology (22.5%).2 These two sectors have the ability to benefit from strong economic trends as well. Moreover, within information technology, the S&P 500 Quality Index holds Visa and MasterCard, with just over a combined 9.0% exposure.2 Both of these companies can benefit from strong consumer spending via their transaction-based businesses, which facilitate consumer purchases.

One of the potential benefits of the quality factor is the selection of stocks that have strong balance sheets. In this case, the S&P 500 Quality Index selects stocks based on return on equity, leverage and earnings quality via accruals.