The discussions on the merits of carbon awareness investing are evolving and highlighting a desire to shift from the current data-driven carbon emission framework to a more sophisticated and risk analysis-driven, 2 degree pathway paradigm. The shift has been spurred largely by the Financial Stability Board (FSB) and recommendations from its Task Force on Climate-related Financial Disclosures (TCFD). At the Responsible Investor Americas Conference in early December, the implementation and the impact of the TCFD recommendations were a heavily discussed topic, as they could prove to be a game-changer in carbon awareness investing.

The TCFD was created in 2015 by the G20 Finance Ministers and the Central Bank Governors, headed by Michael Bloomberg and given the goal to create a climate-related disclosure framework that will aid the three major groups who are involved in understanding climate-related financial risks—corporations, investors, and regulators. Its report was released in June 2017 and is expected to prove instrumental in laying the groundwork and framework to help market participants understand the risks and opportunities posed by the transition to a low-carbon economy.

The TCFD recommendations call for greater climate-related disclosure and information in a corporation’s governance, strategy, and risk management processes and the implementation of standardized metrics plus targets. The materiality principle assessment is encouraged in the strategy and metrics and targets sections. The TCFD’s overarching goal was to focus on the financial impact of climate-related risks and opportunities on an organization rather than the impact of an organization on the environment (Exhibit 1). This latter effort is synonymous with impact measurement, which is an outward assessment aiming to quantify the impact of a company in regard to its environmental consequences. As discussed in my previous blog, the endeavor itself is honorable but presents a host of considerable challenges. Global companies have a multitude of businesses and can find themselves making numerous products—some that are deemed positive and others deemed negative. An attempt to arrive at an overall score that quantifies such an impact can be difficult, problematic, and unreliable at best. 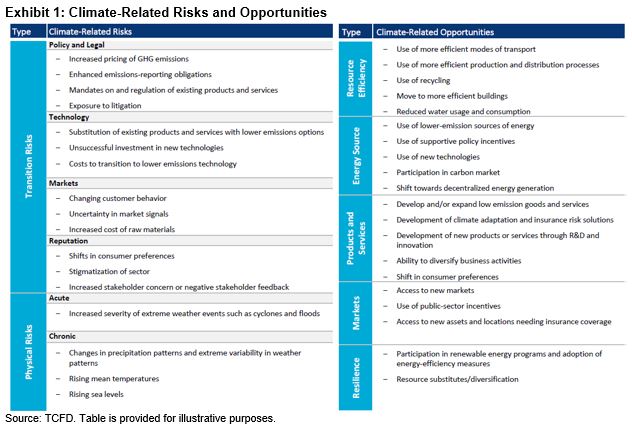 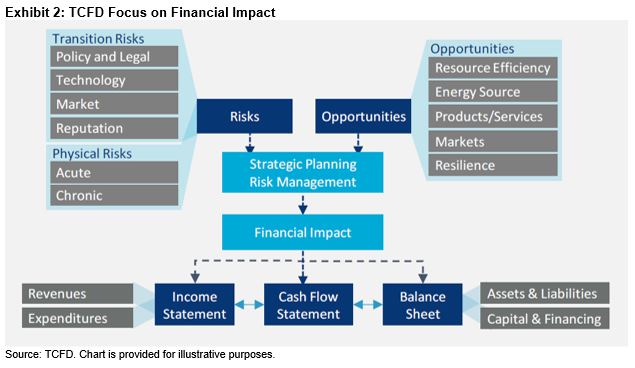 As the TCFD’s report encourages companies to make disclosures, it is hoped that these disclosures will end up in mainstream integrated financial reports rather than in sustainability reports, whereby audit committees and senior executives will then get involved (Exhibit 2). In addition, the task force encouraged the use of scenario analysis, whereby corporations can use forward-looking information, with the 2 degree scenario as the common reference point. The TCFD realizes that widespread adoption of its recommendations is critical and the momentum is there, as evidenced by the recent EU High Level Expert Group on Sustainable Finance announcement that the TCFD recommendations will be integrated into EU policy. More than 100 companies with a combined market cap of approximately USD 3.5 trillion and financial institutions responsible for USD 25 trillion in assets have stated their support for the TCFD recommendations following their launch in July 2017.[1]

The TCFD says that asset owners have a crucial role to play in influencing better disclosure, as they hold the power of mobilizing assets in the investment value chain. The TCFD is sanguine that its recommendations implementation path will gain further momentum and envision the following milestones over the next five years, as climate-related risks and opportunities reporting takes hold. 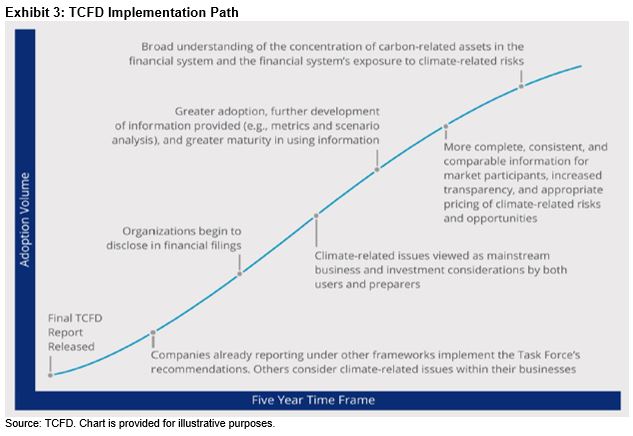