In the mid-year 2017 SPIVA® Australia Scorecard, the majority of Australian funds underperformed their respective benchmarks across most categories, similar to previous scorecards.  More than 80% of Australian Mid- and Small-Cap funds underperformed the S&P/ASX Mid-Small over the past 12 months.  In contrast, A-REIT funds stood out as the best-performing category versus their benchmark, the S&P/ASX 200 A-REIT, with 87.5% of funds outperforming over the past 12 months (see Exhibit 1).

With falling bond prices and rising bond yields, the S&P/ASX 200 A-REIT declined 11.1% from July 2016 to June 2017, while A-REIT funds suffered less, with losses of 8.6% and 8.3% on an equal- and asset-weighted basis, respectively.  Historically, the most significant benchmark-relative outperformance of A-REIT funds was seen during the global financial crisis in 2008 (see Exhibit 2). 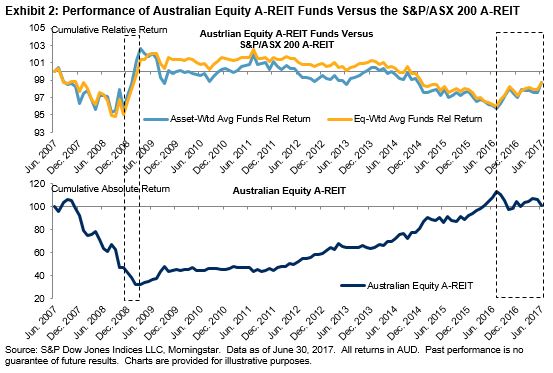 Evidently, the vast majority of A-REIT funds tended to be more defensive than their benchmark over the past five years, as most of them recorded less volatile returns over the one-, three-, and five-year periods.  This characteristic seems to be unique to funds in the A-REIT category and has not been observed in other Australian fund categories (see Exhibit 3).

As Australian A-REIT funds have experienced an extended bull market after the global financial crisis, the majority of the defensive A-REIT funds delivered less pronounced returns than the S&P/ASX 200 A-REIT for most of the time during this period, until the A-REIT sector began to decline in late 2016.  Due to the significant difference in return volatility of A-REIT funds versus their benchmark, measuring A-REIT funds’ performance on a risk-adjusted basis (amount of return divided by amount of risk over the same period) compared with the benchmark is important supplementary information, in particular to A-REIT investors.