Despite today’s very low inflation the Fed keeps raising interest rates and is now discussing when to shrink its balance sheet to further tighten monetary policy.  The Fed’s own inflation forecast anticipates continued low inflation at 1.6% in 2017 creeping up to 2% in 2018 and 2019 and not seeing any increase later on. Moreover, consumers and the public have similar expectations for low inflation now and in the future. So why is the central bank pushing interest rates higher?

The principal reason is the belief that a low and falling unemployment rate is a reliable signal of future inflation.  This is part of the received wisdom of economic policy which has some basis in the data. It originated with work done by a New Zealand economist, A. W. Phillips, in 1958 comparing unemployment and changes in wages in Great Britain from 1861 to 1957.  Phillips found a consistent relation that showed lower unemployment rates were associated with higher rates of wage inflation.  While the original finding was empirical – based on the data rather than economic theory – the idea soon became the basis for various theories of what causes inflation and how economic policy could lower either inflation or unemployment. 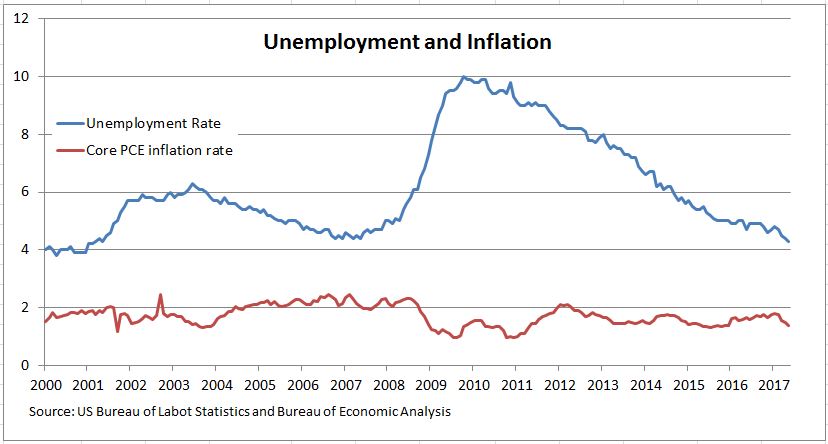 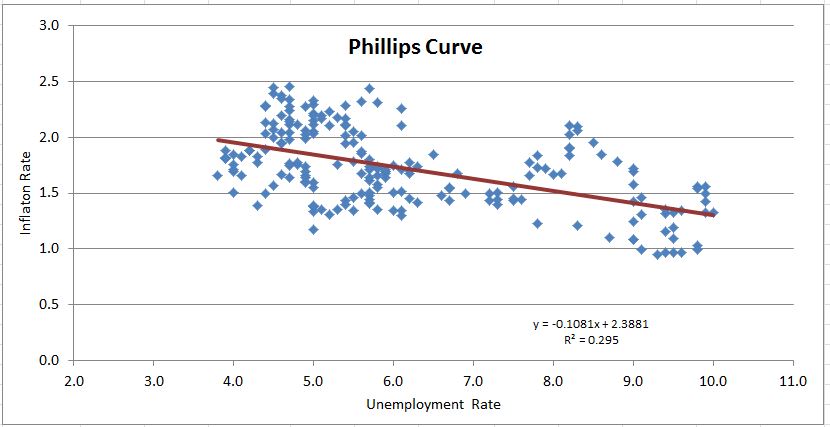 Based on a combination of experience, data and economic theory, the Fed believes that continued declines in unemployment point to higher inflation rates. At some point the unemployment rate will hit bottom, inflation will be driven higher and a series of rapid increases in interest rates will be necessary. The result of that move could be a recession.

A related argument for gradual increases in interest rates is to prepare for the next recession: Were the economy to contract and the unemployment rate to rise, the Fed would want to lower interest rates. With the fed funds rate at 1.0%-1.25% and ten year treasuries trading at 2.4%, there isn’t much room to cut.  If the Fed slowly pushes interest rates back to more normal levels with the Fed Funds rate at 3%, its ability to stimulate the economy during a recession would be improved.

Tagged:
inflation, Phillips Curve, The Fed, Trade-offs, Unemployment
The posts on this blog are opinions, not advice. Please read our disclaimers.