Quiet Before the Storm?

Global markets seemingly remain unperturbed—despite homing in on Election Day in the U.S.  Although dispersion ticked up globally from September month-end levels, it is still sitting at below average levels as of October 31 in the U.S. Similarly, correlation is also well below average. Together these coordinates are pointing to particularly peaceful times for U.S. equity markets on the dispersion-correlation map. On the international front, the story is similar. Though dispersion is above average in the Europe region, correlation is below average and is at the lowest level in more than 2 years. In Asia, both dispersion and correlation are close to record low levels.

Times of crisis are typically characterized by higher dispersion levels, as witnessed by years 2000 (tech bust) and 2008 (financial crisis). While dispersion has increased across the globe it is nowhere near crisis levels in the U.S. and Asia and somewhat higher in Europe.

Things could very well change—and change quickly. But for now, it’s all quiet around the world. 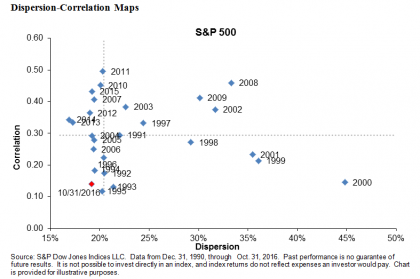 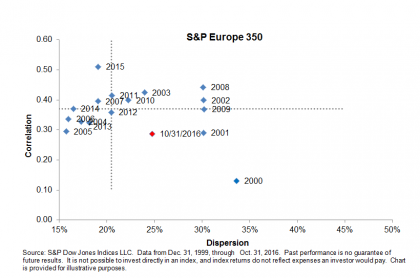 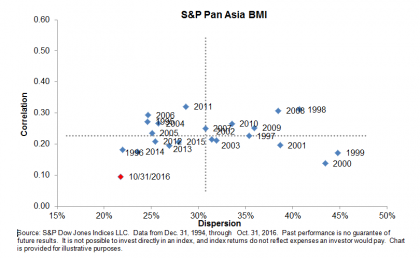