Should You Make Chemical Enhancements To Your Portfolio?

Greece Is not out of the Picture for U.S. Investors

On June 28, 2015, the PBoC announced a 25 bps policy rate cut and a 50 bps targeted reserve ratio cut to support growth. Following the news, the money market rate opened lower and the yuan weakened. While there was no significant or immediate impact on China’s onshore bond market, the yield-to-maturity tracked by the S&P China Sovereign Bond Index continued its tightening trend seen in 1H 2015, dropped 48 bps to 3.08%, as of June 29, 2015. On the other hand, its total return added 0.56% in June, bringing its YTD return to 2.87%. 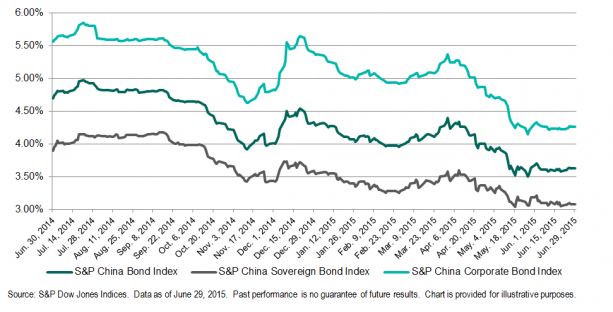 The S&P 500 is not only the most widely used index for ETFs and funds, it is also the index of choice for researching markets.  Much of the research focuses on the index pop — how much a stock jumps when it joins the index.  About ten years ago some papers on comovement appeared arguing that index membership changes a stock’s behavior and affects the overall market.  The gist of the argument is that two stocks of the similar size, valuation, sector and fundamentals will behave like one-other unless one stock is a member of the S&P 500 and the other is not. The claim is that when a stock joins the S&P 500, its returns comove with the rest of the S&P 500 index but do not fully reflect its fundamentals.  Indices and index membership, not stocks, drive the market.  Moreover, statistical evidence for comovement implied that the expansion of indexing was altering the way stocks behaved such that index membership mattered as much as fundamentals like earnings, dividends and book value; that index membership in the S&P 500 would raise the stock’s β.

Two recent papers dispute this view and show that stocks – and not index membership — are what matters. This new research explains why a stock’s fundamentals appear to shift when it is added to the S&P 500. There is a difference in the behavior of seemingly similar stocks observed when one of the stocks joins the S&P 500.  The difference is seen in changes in the stock’s β and in higher EPS forecasts.  However, this is not the result of some unexplained index membership effect that makes stocks in the index act like one-another or comove. Rather, the changes in a stock joining the index reflect the stock’s own performance in the period before it is added to the S&P 500.

Neither the S&P 500 nor the S&P 500 Index Committee alter the behavior of stocks.  The driving force here is the way the market, on its own, shifts and the process that the Index Committee uses to identify stocks for the S&P 500.  Stocks selected for the S&P 500 should have a market value of $5.3 billion or more and have positive earnings over the last four quarters.  Since there are relatively few stocks outside the index that meet these requirements and since M&A activity continuously generates openings in the index, the place to find good candidates is among profitable growing companies.  These companies often enjoy rising earnings and attract rising analysts’ estimates of future earnings. Moreover, as a stock’s price and market value increases its fundamentals, including its β, will change because it is shifting away from small cap and value towards mid or large cap and growth.  The Index Committee is simply choosing stocks that meet the guidelines so that the S&P 500 continues to reflect the market.

The two recent studies are:

On the surface, the most basic commodity beta, the S&P GSCI, hasn’t done much in 2015. It is down just 21 basis points (bps) for the year after losing 11 bps in June. Further, only 9 of 24 commodities are positive year-to-date with the overall term structure in contango after two years of structural backwardation. Coffee, lean hogs and nickel are the biggest losers for the year, down 24.6%, 24.5% and 21.5%, respectively. However, unleaded gasoline, cocoa and cotton that are up the most of 20.3%, 12.4% and 10.7%, respectively, have gained significantly.

Please see the table below for sector performance through June 30, 2015:

Most interesting in 2015 thus far is the volatility in commodities with 9 of 24 commodities posting double-digit moves for the year. The volatility in energy peaked in early April followed by an industrial metals spike in May. The performance of energy has been so dominated by oversupply that its response to the economy has been masked. However, industrial metals, also known for its economic sensitivity had spiked together with energy in April – that was indicative of a contraction, and these sectors followed with weak performance.  The volatility with the poor performance was finally enough to drive a new wave of investor selling that may be just the catalyst needed to stabilize the market. If open interest collapses, then production may slow as insurance in the futures market becomes too expensive. Historically in high volatility periods, open interest needs to collapse before oil finds stability again.

The one sector that is picking up volatility is agriculture. Extreme weather from El Nino may be the biggest driving force in the solid gains for every single one of the eight commodities in the sector in June. The grains were up 20.0% in June, its fourth best month in history (since July 1982) and best June since 1988. Even with lesser performance of only 3.1% in June, agriculture posted its biggest monthly gain in three years with its sixth best month in history.

Going into the summer there is generally an increase in demand for gasoline to support more driving; however, the bad news for consumers is that gas prices rise much quicker with oil prices than they fall when oil falls. Cheaper natural gas and livestock are other summertime favorites that may help consumers maintain demand for gasoline through the driving season. However, livestock is now showing seasonal shortages (is the only sector in backwardation) so the prices may start to rise – and at an accelerated pace from the increasing prices of grains used to feed the livestock.

Should You Make Chemical Enhancements To Your Portfolio?

Most diversified index-based materials products have significant exposure to the chemicals industry, though the weightings can be different. For example, chemicals comprised approximately 70% of the S&P 500 Materials Index as of late June. Meanwhile, the S&P 500 Equal Weight Materials index had a 54% weighting in chemicals, with more exposure in containers & packaging companies. As such we think investors need to understand what drives the industry.

S&P Capital IQ thinks cost saving efforts can spur the chemicals industry to higher earnings per share (EPS) growth levels in 2016, after expected growth of less than 10% in 2015. We see industry revenues growing slightly and at a slower pace over the next few years. Our profit and revenue growth forecasts are tied to the likelihood of a steadily improving US macroeconomic environment, mostly offset by a stronger US dollar, significantly lower oil prices, and slowing economic growth in China.

In the fourth quarter of 2014 and first quarter of 2015, a rise in the value of the dollar versus other currencies had a negative effect on revenue per share, but a fall in the dollar index would be a positive in the second half of 2015 and in 2016. Specialty chemicals companies and divisions spend money and time developing new products. In most cases, Muir noted these new products are highly specialized to suit the end user, and as a result are often sold at much higher margins than their less specialized counterparts are, helping operating margin.

S&P Capital IQ recently published an Industry Survey that reviews the drivers of the chemicals industry. This report along with S&P Capital IQ stock and ETF reports tied to materials sector can be found on MarketScope Advisor.

Greece Is not out of the Picture for U.S. Investors

The yield-to-worst (YTW) on the U.S. 10-year Treasury bond, as measured by the S&P/BGCantor Current 10 Year U.S. Treasury Index, increased by 21 bps and ended 34 bps higher.  At 2.47%, it appeared the optimism over a Greek settlement was justified.  The index has returned -2.90% MTD and -1.94% YTD as of June 26, 2015.  The story changed over the weekend, as Prime Minister Alexis Tsipras surprised all by calling a referendum on whether to accept the European terms.  The eurozone finance ministers rejected Greece’s request for an extension in order to hold a referendum.  As a result, Greek banks have been closed and limiting withdrawals.  The YTW of the U.S. 10-year U.S. Treasury bond opened Monday, June 29, 2015, trading at 2.29% as a result of Greece’s news.