While I was eating at a well-known restaurant chain, I saw this sign in the front window: 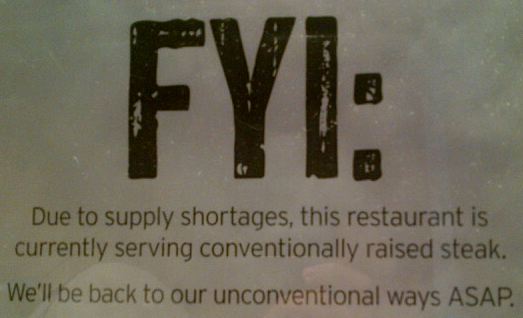 So of course as a commodity lady my mind doesn’t think about choices like chicken or veggies, but I wonder what happened to the price of beef in the shortage and why is there a shortage?

The S&P GSCI All Cattle, which includes both the S&P GSCI Feeder Cattle and Live Cattle, has gained 4.4% since the end of May, after losing 8.6% from the beginning of the year. See the monthly returns in the table below:

Source: S&P Dow Jones Indices. Data from Jan 2013 to July 17, 2013. Past performance is not an indication of future results. This chart reflects hypothetical historical performance. Please see the Performance Disclosure at the end of this document for more information regarding the inherent limitations associated with backtested performance.

An obvious driver is that the grilling season has kicked in, but that is on the demand side. Also on the demand side, as reported in the United States Department of Agriculture (USDA) report on July 11 was U.S. beef exports rose 4.3% in May from a year ago for muscle meats and 2.7% for total beef and beef variety meat sales. The increase was from a 74% increase in sales to Japan, which eased its age requirement on U.S. beef to cattle under 30 months of age from 20 months or younger.

In addition to the rising demand, the summer heat has disrupted supply since cattle eat less when it’s hotter outside. Also the drought conditions have affected rangelands, leaving little water and forage for livestock, prompting the Bureau of Land Management (BLM) to undertake targeted actions, such as reducing grazing.

Last year beginning in May, the S&P GSCI All Cattle had a 4 month winning streak driving the index up 7.9% before a small dip in Sep of 1.1%. By the year’s end the index gained 13.3% from the trough in Apr. Could the drought in 2013 drive similar shortages and higher returns as from the 2012 drought? Compare droughts here.