The highest weekly U.S. crude oil stockpiles going back to 1982 and the highest monthly inventories back to 1930 were announced by the U.S. Energy Information Administration (EIA) yesterday.  By now, the market is so oversupplied with oil in the near term that more or less supply shouldn’t matter on a daily basis. However, we are seeing the highest volatility since the global financial crisis, as shown in the chart below, but the volatility is still well below the volatility experienced in the demand-driven crises as opposed to this supply-driven oil drop. 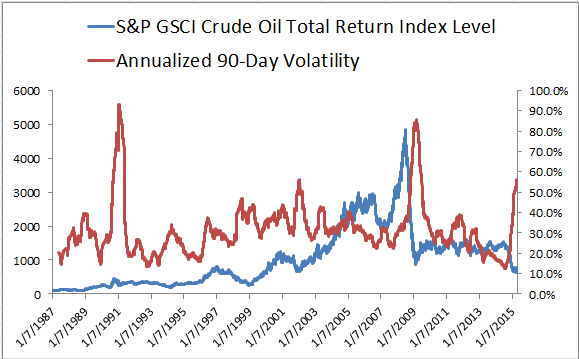 Source: S&P Dow Jones Indices. Past performance is not a guarantee of future results.

Today, in spite of really high inventories that usually diminish supply shock impacts on price, some news came out that caused prices to spike. Reuters reported oil prices reached a new high this year from tension coming out of the middle east. Even though this isn’t the first time in 2015 oil prices rose from political tensions (Feb. supply disruptions in Libya and Iraq increased oil price,) this time is different from the bad news on the demand side.

Today, HSBC said its China Manufacturing Purchasing Managers’ Index, a gauge of nationwide manufacturing activity, fell to a one-year low of 49.2 in April, compared with a final reading of 49.6 in March. 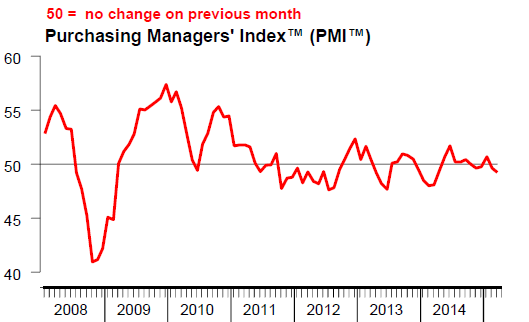 This data was so weak that it raised prospects of economic stimulus for China, which is potentially highly beneficial for oil (and other commodities) since China is the world’s second-largest oil consumer, and its oil demand is linked to economic growth. 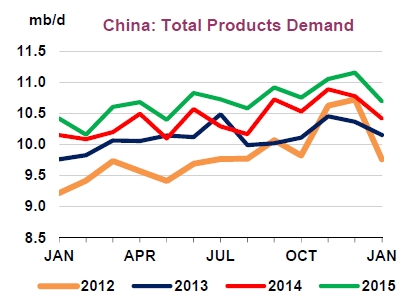 This may be just what the oil market needed, especially after a weak demand forecast from the International Energy Agency’s (IEA) Oil Market Report report last week. Despite supportive data from the China Association of Automobile Manufacturers that showed a 9% year-over-year gain in new vehicle sales in the first two months of 2015, the IEA reported heightened stock-builds likely from extra import flows but with an ailing industrial backdrop. That ailing backdrop seems to be weak enough now to possibly cause Chinese stimulus to be the catalyst of an oil rebound.