As demand for ESG continues to grow, how is the S&P 500 ESG Index helping investors reinforce core allocations and align objectives with ESG values? S&P DJI’s Maggie Dorn and State Street Global Advisors’ Brie Williams take a closer look at the potential benefits of putting this index to work in purpose-built portfolios.

For a U.S. investor, developed market exposure outside of the U.S. is a core building block in forming a comprehensive global portfolio. In part because of its status as the world’s first international equity index, MSCI EAFE enjoys a commanding market presence for international equity benchmarks. It also serves as the underlying index for many of the largest international equity ETFs and index funds. However, what many don’t realize is that MSCI EAFE excludes Canadian securities entirely, which may create an unintended gap in exposure or reflect an unfair performance benchmark for a manager focused on developed ex-U.S. equities.

In our third blog in a series highlighting key features of the global equity benchmark landscape, we explore the limitations of choosing MSCI EAFE as a regional representation of the international equities asset class.

Exhibit 1 depicts the country composition of MSCI EAFE compared to the S&P Developed ex-U.S. BMI, which includes all developed markets excluding the U.S. With an 8.4% weight, Canada was the third largest market out of the 24 countries included in the S&P Developed ex-US BMI as of Sept. 30, 2020. 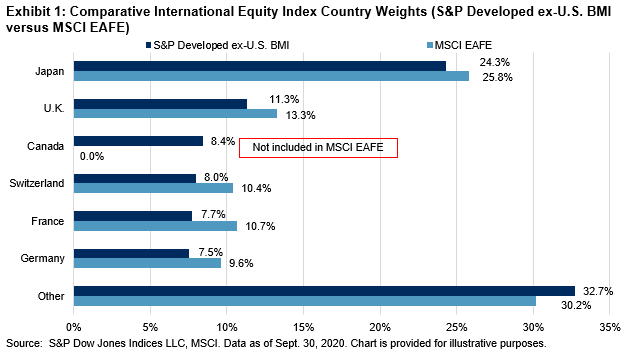 Without a separate, standalone allocation to Canada, a global equity portfolio based on the S&P 500®, MSCI EAFE, and an emerging markets equity index would exclude Canada, the world’s fifth largest equity market, entirely.

When evaluating international equity index exposures, it is critical to fully understand the underlying benchmark being tracked to ensure it is covering all countries you expect it to include. Similarly, an actively managed fund should not be benchmarked to an index that excludes Canada if its mandate is to invest in all developed markets excluding the U.S. Remember to look under the hood or you might be inadvertently excluding major countries from your global equity opportunity set.

In response to the economic ravages of COVID-19, central banks and investors around the world went on a bond buying spree, pushing fixed income yields down and complicating the search for portfolio-generated income. While yields are generally off their March 2020 extremes, by historical standards they remain quite diminished.

One alternative strategy to generate supplemental income from long-horizon portfolios is to sell covered calls on the holdings of structurally long exposures. This takes advantage of implied volatility in option prices exceeding that of subsequently realized volatility on average.

Alas, typical covered call strategies tend to underperform significantly in strongly upward-trending markets (such as in 2019) or when a sharp downturn is immediately followed by a quick rebound (March-April 2020). In both cases, the options written would be exercised and the holdings called away, costing an investor dearly by not participating in the market’s upside.

The trick, then, is to find a way to generate sufficient income in calm markets to offset any gains given up, and to limit the upside surrendered during rebounds. The S&P 500 18% Daily Risk Control Covered Call 103% Strike Index illustrates one way to accomplish that. While the name is rather unwieldy, let’s look at each of the ingredients it comprises and how they come together: 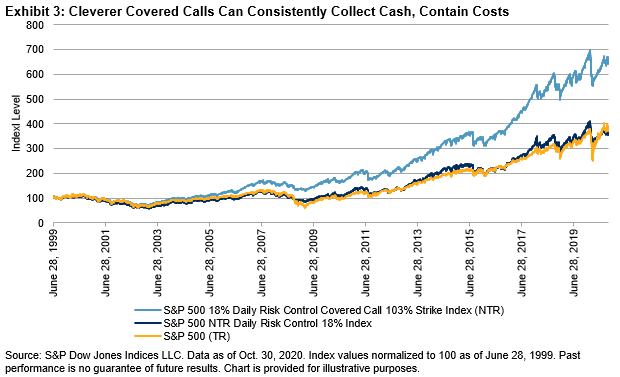 So why go through the trouble of adding risk control if only to target the usual volatility of the S&P 500? Because now the covered calls are based on the exposure of the risk-controlled index: exposure that dynamically increases in calm markets and automatically reduces when markets turn volatile.1

When markets begin selling off and increase in volatility, the calls currently being held would have been sold with a strike above the highs, the same as with a normal call writing program. But rather than continuing to sell calls on the full portfolio through the (eventual) nadir, the risk control overlay typically reduces exposure, and thus fewer calls are sold, which means less of the eventual upside is called away. As markets rebound, volatility tends to recede, allowing the risk control index to add exposure—and new calls, at higher strikes, to be written.

This doesn’t completely offset the consequences of selling calls in an upward market, but it does narrow the spread significantly when compared to standard call writing strategies. However, combined with the added exposure of the risk control index in calm periods, it historically not only has generated more premium income than standard call writing strategies, but outperformed the base indices. While bulls and bears endlessly debate market direction and political winds, theta gang can quietly take advantage of higher implied volatility, generating supplemental income and added value over time.

1 The construction of the covered call index uses synthetic call options (priced with a transaction volatility cost of 150 bps) written on the risk control index. In practice, it’s far more likely, and more practical, to dynamically trade options on the S&P 500 itself to match the exposure of the risk control index.

Explore the headwinds and tailwinds facing insurers and how these factors are impacting general accounts portfolios.

The headline S&P GSCI fell 3.6% in October. Energy was responsible for the bulk of the declines in October, while agriculture continued to benefit from the return of demand from China, as well as weather-related supply issues.

Across the energy complex, the rising number of COVID-19 infections, a second wave of lockdowns, and travel restrictions presented a serious threat to oil demand. The S&P GSCI Petroleum fell 10.9% in October, reflecting the risk of a sizeable amount of demand destruction over the coming months. Global oil inventories have remained well above their five-year average, consumption has recovered more slowly than expected, and a resurgent COVID-19 pandemic threatens a double-dip recession. The OPEC+ group is scheduled to hold a policy meeting at the end of November and must decide whether to delay plans to ramp up output by 2 million barrels per day, starting in January 2021, in light of the poor demand picture.

The importance of China’s role in industrial metals was once again on display in October. In contrast to energy, the S&P GSCI Industrial Metals ended the month up 2.8%. According to many market participants, the old era of aluminum, characterized by seemingly immeasurable Chinese smelter capacity expansion, multi-year surpluses, and high inventories, may finally be coming to an end. The S&P GSCI Aluminum ended the month up 5.3%. Nickel also rallied; the S&P GSCI Nickel ended the month 4.3% higher, based on ore shortages and robust demand from China’s stainless-steel mills.

The performance across precious metals was lackluster in October, despite a clear decline in risk appetite among investors resulting from the long-term fiscal and monetary implications of the global pandemic and uncertainty over the outcome of the U.S. presidential election. The S&P GSCI Gold ended the month down marginally but remained up 20.4% YTD.

The S&P GSCI Grains rose 4.3% on the month and its YTD performance turned positive. After a bearish situation surrounding prices over the summer, recent supply issues and a pickup in demand benefitted corn, soybeans, and wheat. Within the softs space, cotton and sugar rose during the month while coffee and cocoa fell. The S&P GSCI Cocoa moved the most, falling 9.9% on the month. A big drop in demand due to the pandemic left the world’s largest cocoa producer, Ivory Coast, struggling to sell 500,000 tons of cocoa beans from its interim harvest.

A recovery in demand from China continued to support hog prices in October; the S&P GSCI Lean Hogs was up 3.9% over the month. However, the cattle market struggled under the weight of heavy supplies, concern regarding demand from the U.S. foodservice sector, and uncertainty surrounding consumers’ food purchasing behavior over the holiday period in light of the pandemic. The S&P GSCI Live Cattle was down 3.6% in October.