Higher Turnover Ahead For S&P 500? Not Necessarily!

Exploring SPIVA on a Risk-Adjusted Basis

It’s time to look at dividend indices through the lens of these “unprecedented times.” Many market participants seek the comfort of dividend strategies, precisely for the yield they can generate. However, dividend investing is under siege, since many companies have announced reduced dividends or have suspended them altogether given the impact of the COVID-19 pandemic on the global economy. A crystal ball might come in handy to foretell the future. In the absence of that, we can look at historical periods of financial crisis to see how these strategies performed.

Exhibit 1 focuses on the Global Financial Crisis (GFC) of 2008, which shows that during mid to late October 2008, the main country benchmarks in Mexico, Chile, and Brazil declined substantially. However, with the exception of the S&P/BMV Dividend Index, the other local dividend indices outperformed their respective benchmarks. The S&P Dividend Aristocrats® Brasil and the S&P Brazil Dividend Opportunities outperformed the S&P Brazil LargeMidCap Index by 11.6% and 14.0%, respectively. 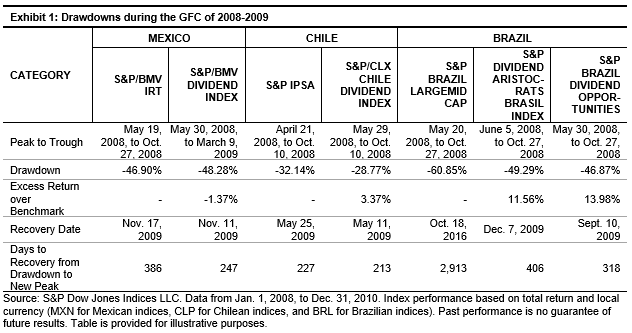 Not only did most dividend indices fare relatively well compared with their respective benchmarks during the GFC, but in all cases, the strategies recovered faster and, in some cases, much faster. In Mexico, the total return version of the S&P/BMV IPC took 139 days longer to recover than the S&P/BMV Dividend Index. The S&P Dividend Aristocrats Brasil Index and S&P Brazil Dividend Opportunities each took around a year to recover, while, shockingly, the benchmark took nearly eight years to achieve a new peak after the drawdown.

Was this a unique outcome tied to the GFC? Not necessarily. Exhibit 2 gauges the period between 2010 and 2012 to capture the period during Black Monday,[1] and it paints a similar picture as that of the GFC. However, in this case, all dividend indices outperformed their respective benchmarks and recovered much faster too. 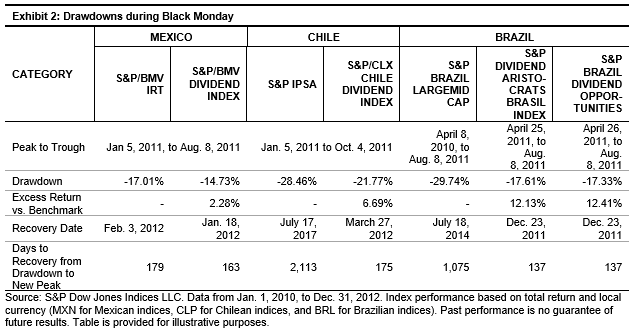 What happens when the events are more local? Exhibit 3 confirms similar results. In January 2014, a sharp devaluation of the Chilean peso against the U.S. dollar and the general loss of confidence in emerging markets caused a significant drawdown in Chilean equities. In January 2016, due to crude oil prices falling sharply, Peru and Brazil displayed major drawdowns. 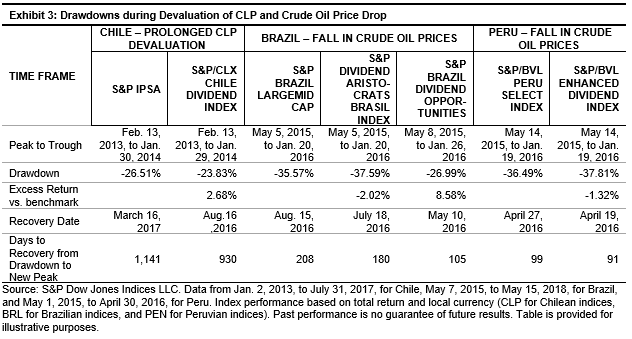 In conclusion, history shows that dividend indices in Latin America were generally able to ride out unprecedented times better than their benchmarks. While past performance is certainly no crystal ball, it may provide useful context.

[1] The Black Monday crash of Aug. 8, 2011, refers to the time when the U.S. sovereign credit rating was downgraded by S&P Global Ratings for the first time in history.

The first half of 2020 has been gold’s time to shine. The double-digit YTD gains outpaced equities and other safe-haven assets during these uncertain recessionary times. As of May 29, 2020, the S&P GSCI Gold was up 13.94% YTD. Unprecedented global fiscal and monetary stimulus measures have significantly increased sovereign debt levels, leading to concerns of currency devaluation. Historically, such environments have been constructive for gold as a globally recognized store of value. Low to negative global real yields and gold’s low correlation to other assets add to the positive catalysts in the current environment. 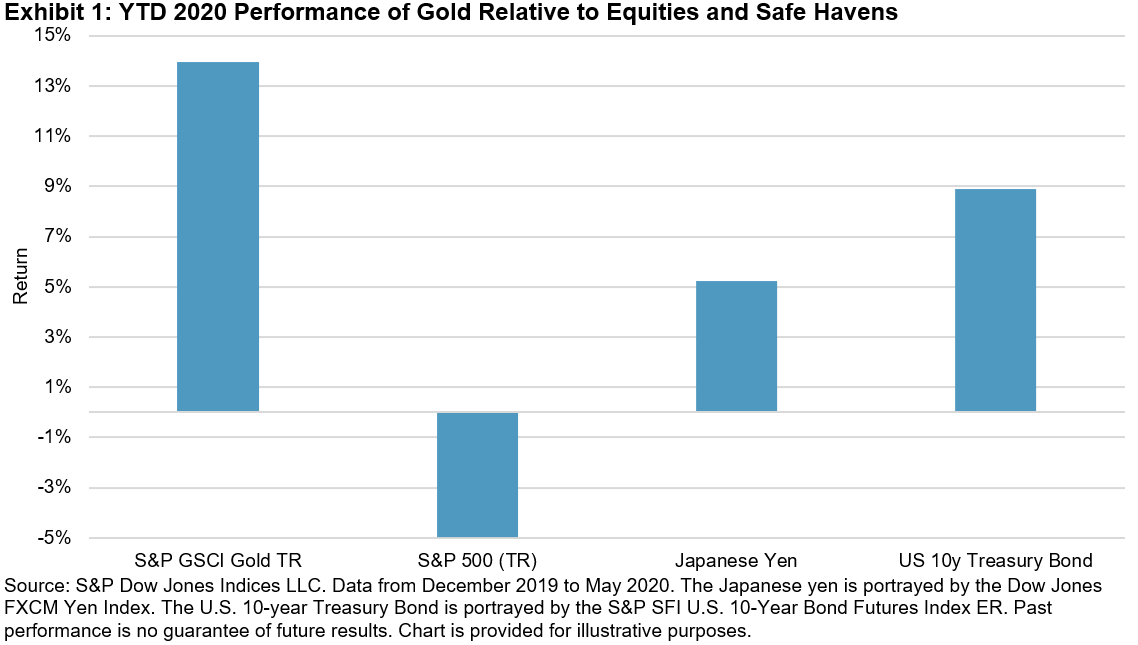 It has not been an entirely smooth ride this year, with some volatility along gold’s path to outperformance, as was highlighted in a blog by Fiona Boal. A rhyming pattern appeared along the lines of the 2008 Global Financial Crisis, in which a need for liquidity forced market participants to sell gold holdings before reloading and returning gold back to an upward trend (see Exhibit 2). 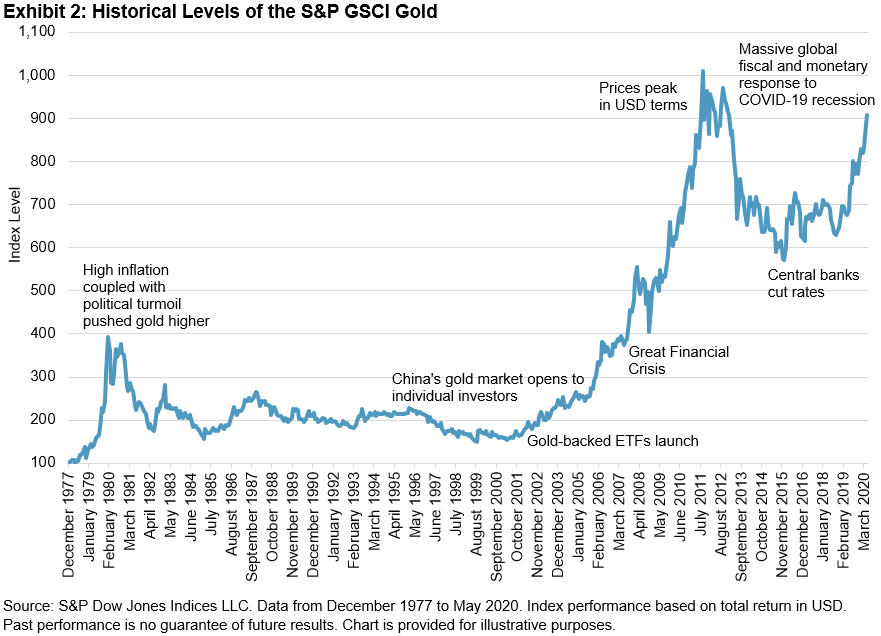 This year’s backdrop of the potential for a pandemic-induced global recession comes as the China-U.S. trade war restarts. There is a deglobalization of supply chains, creating a less-inclusive global economy. Uncertainty in the near term seems to be the only certainty in 2020.

This year is also different from a demand perspective as it relates to gold. According to the World Gold Council, first quarter 2020 jewelry demand was the lowest in over 10 years, while first quarter investment demand was the highest since the first quarter of 2016 (see Exhibit 3). Preliminary data suggests the second quarter of 2020 is shaping up to be a continuation of this trend, with reduced consumer spending on non-essential jewelry purchases combined with record flows into gold exchange-traded products. 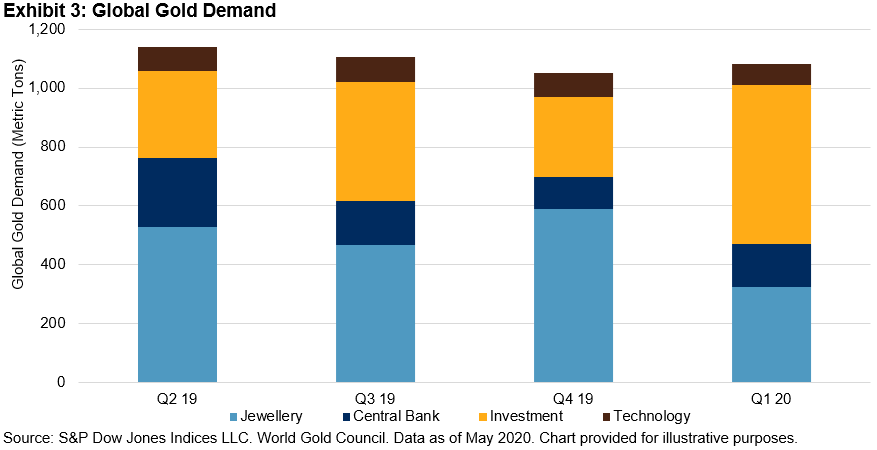 As of May 29, 2020, the S&P Commodity Producers Gold Index returned 16% YTD. The environment is particularly attractive for these companies, with potential M&A activity ahead due to fewer large-scale discoveries of gold deposits. Once discovered, it can take 15 years to reach successful ore production. Fewer discoveries and near-term mine suspensions by governments due to COVID-19 make the precious metal that much scarcer. There was a fifth consecutive quarterly decline in global gold mining prior to any of the recent pandemic-related shutdowns. 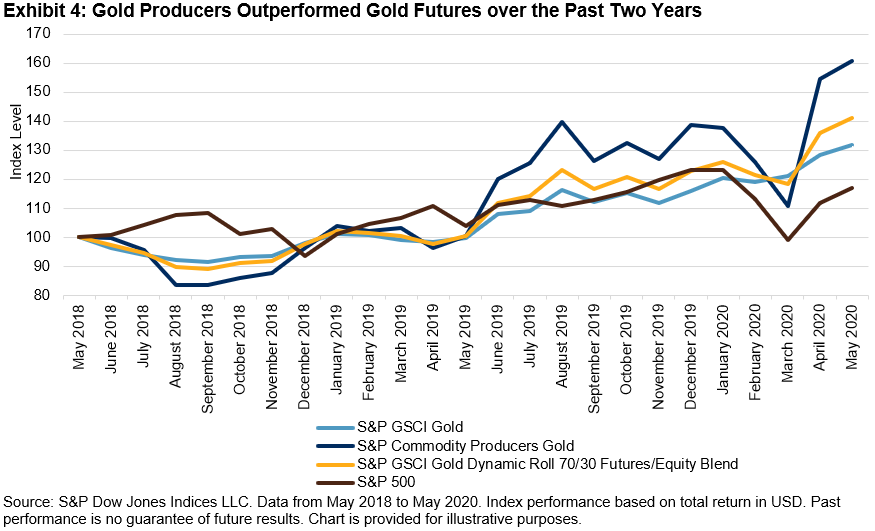 Higher Turnover Ahead For S&P 500? Not Necessarily!

The emergence of COVID-19 caused sizeable recalibrations in financial markets as investors grappled with the anticipated impacts on people’s lives and on economic activity.  Given many companies saw significant drops in market capitalizations amid the recent market sell-off, and in light of expectations for companies’ earnings to suffer from reduced economic activity, some may be wondering if we will soon see elevated S&P 500 turnover.

While I have no knowledge of what (if any) constituent changes may be made going forward – I do not sit on the S&P U.S. Index Committee, which is responsible for the S&P 500, S&P MidCap 400, and the S&P SmallCap 600 indices – the topic of higher potential turnover in the COVID-19 era highlights the importance of understanding index construction.

The reason some people may believe higher S&P 500 turnover beckons is that our U.S. Index Committee uses several screens when determining companies’ eligibility for index inclusion.  For example, companies must have a history of positive earnings and must meet certain capitalization thresholds. 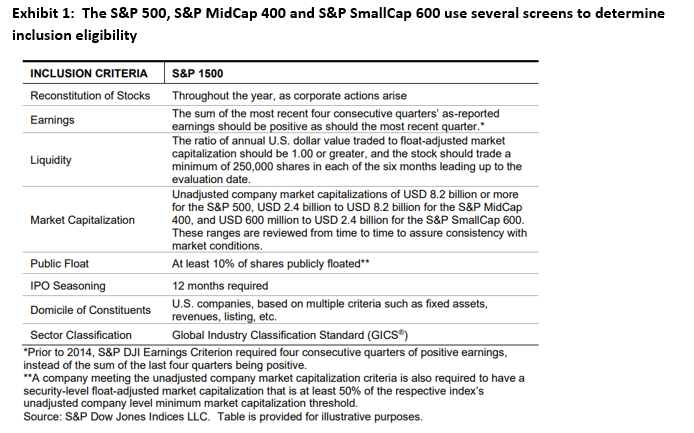 Given the aforementioned anticipated impact on companies’ earnings, it is perhaps unsurprising to see several constituents of the S&P 500, S&P 400, and S&P 600 (collectively, the S&P 1500) would not meet the earnings requirement.  Energy companies’ earnings were particularly hard hit from the headwinds in commodity markets earlier this year.

But before anyone uses exhibit 2 to infer substantial turnover in S&P U.S. equity indices lies ahead, it is important to recognize that the inclusion criteria outlined in Exhibit 1 are for NEW additions to the various components of the S&P Composite 1500.  It is also worth noting that many U.S. companies that are currently not members of the S&P 1500 do not currently meet the earnings requirement, and so are not currently eligible for index addition. 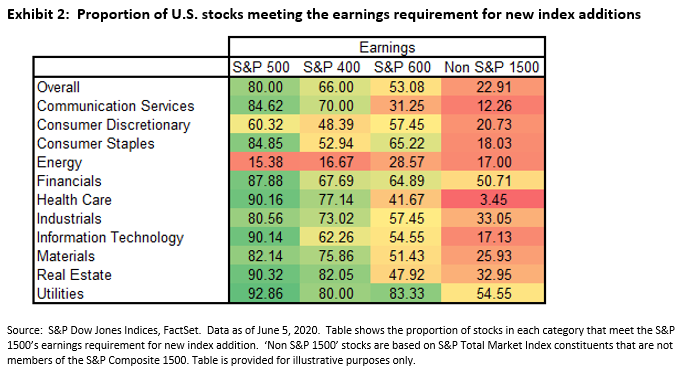 Notwithstanding the fact that many companies are ineligible for index addition, the U.S. Index Committee considers other factors – such as turnover, corporate actions, and market representation – when deciding on constituent changes to the indices. This is highlighted in the S&P U.S. Equity Indices Methodology document; exhibit 3 is a statement from the methodology document outlining the Index Committee’s commitment to minimizing turnover.

As a result, while we will have to wait and see what changes (if any) are made to index constituents, the construction of S&P U.S. Equity Indices’ indicates the recent market environment may not necessarily lead to higher turnover.  Combined with the historical benefit of the S&P U.S. Index Committee making constituent changes on an ongoing, as needed basis rather than on a set reconstitution date – S&P U.S. equity indices typically exhibited lower turnover compared to alternative measures of large, mid, and small cap U.S. equities – market participants may wish to remember the importance of index construction.

Exploring SPIVA on a Risk-Adjusted Basis

What happens to active manager performance when risk is factored in? S&P DJI’s Gaurav Sinha takes a closer look at SPIVA data from markets around the globe. 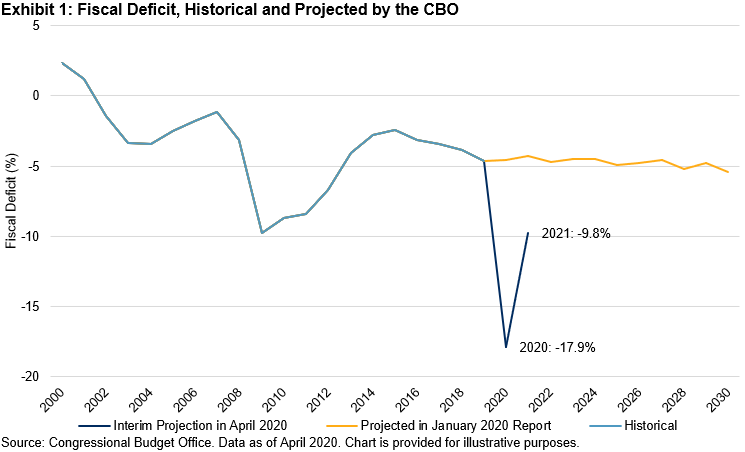 As stated in the latest U.S. Treasury quarterly refunding statement released on May 6, 2020, the U.S. Treasury has increased borrowing needs substantially as a result of the federal government’s response to the COVID-19 outbreak and expects to begin to shift financing from bills to longer-dated tenors over the coming quarters. In fact, the market size and average duration of outstanding U.S. Treasury securities had been steadily increasing even before the COVID-19 outbreak (see Exhibits 2 and 3). Now, both should continue to trend higher.

Increased funding needs and the shift of some issuance to a longer tenor from U.S. Treasury bonds mean more duration supply from U.S. Treasury securities. How has the market weathered this increased supply and the expectation of more supply over the coming quarters?

As the Federal Reserve revamped its large-scale asset purchase program at the same time, the bond market has absorbed the supply fairly well. From March 11, 2020, to May 27, 2020, securities held outright by the Federal Reserve increased from USD 3.9 trillion to USD 5.9 trillion. Exhibit 3 shows the 10-year U.S. government bond yield and rolling one-month realized yield volatility (annualized) since March 1, 2020. The 10-year U.S. Treasury yield jumped by 50 bps within a couple of days in mid-March 2020, but since then it has been trading in a tight range. Realized yield volatility has dropped back to the norm of the post-GFC low. 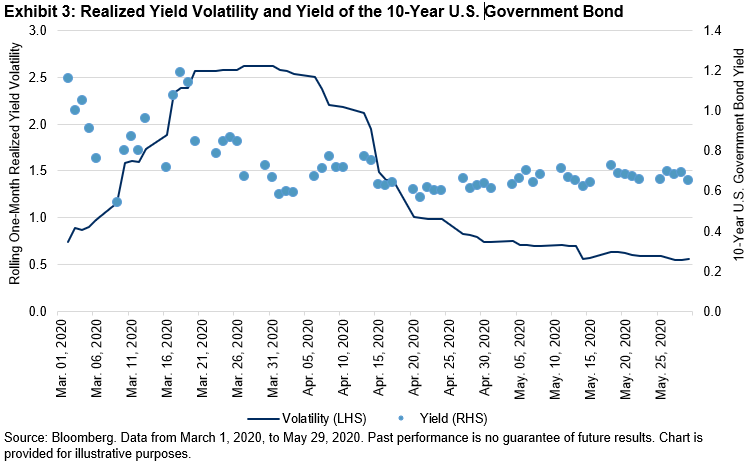 So far, the Fed’s bond purchasing program has been successful in capping yield and keeping yield volatility low. However, the substantial increase in the supply of U.S. Treasuries has opened up the upside risk of interest rates significantly, particularly given the Fed’s reluctant stance on negative rates. Looking forward, U.S. Treasury auctions and their results will continue to be closely monitored by market participants to gauge market appetite for duration supply.