Over the past five years, the S&P GSCI Coffee underperformed the other soft commodities, as can be seen in Exhibit 1. Broad oversupply issues that have been seen in most commodities have been particularly pronounced in the coffee market. In addition to the major coffee-producing countries’ respective economic problems, these countries also generally suffer from high exposure to commodities, a strong U.S. dollar, and the ripple effect of the ongoing trade war between the U.S. and China. One alternative to stem the price decline may be for these countries to collaborate, similar to the way cocoa-producing countries do. In July 2019, Ghana and Côte d’Ivoire reached an agreement for a price floor in an attempt to counteract the lower cocoa prices in the past few years. 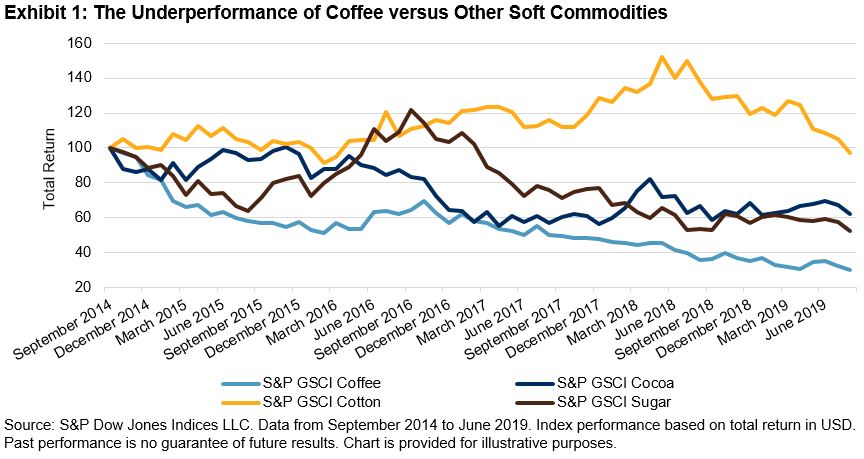 The supply picture is not helping coffee at the moment. In early September 2019, the International Coffee Organization increased its 2018-2019 global surplus estimate to 4.96 million bags from 3.92 million bags estimated the prior month. This estimate compares with the 2017-2018 surplus of 2.05 million bags and would be the second consecutive year with a surplus. This contrasts with a deficit of 1 million bags during 2016-17, and so the oversupply is worsening even with demand picking up globally.

Two of the top three coffee-producing countries have experienced big shifts in their economies over the past five years. Brazil, the largest exporter with 16% of global coffee exports, recently came out of a multi-year recession ending in 2017. Meanwhile, Colombia’s GDP was cut in half over that time as its exports declined by an annualized rate of 9%. About half of Colombia’s exports are crude petroleum and coal, two markets that, along with coffee, experienced extensive price declines over the past five years. Vietnam was the only one of the top three exporters to see an uptick in economic growth, although recent growth forecasts have been more pessimistic owing to elevated debt levels and large fiscal deficits. The World Bank believes Vietnam’s real GDP peaked in 2018.

Coffee consumption globally continues to creep higher, but due to the latest record harvests in Brazil, coffee prices have continued to decline. Starbucks recently proposed it may see a boost from lower costs, as the company projects coffee prices to continue to underperform. However, it is unclear where coffee prices might go from here given the uncertainty present in the global economy and associated levels of consumer consumption. Tastes and habits of consumers are also constantly shifting throughout the world. The S&P GSCI Coffee is designed to provide investors with a reliable and publicly available benchmark for investment performance in the coffee market. S&P Dow Jones Indices offers different versions of this index to cater to the needs of market participants. These versions include enhanced roll yields, dynamic roll yields, covered calls, forwards, and currency and regional indices. Single-commodity indices could offer investors an efficient way to access the return streams of unique assets such as coffee.