Ever since its formation in response to the “Black Monday” crash of October 1987, the United States “Working Group on Financial Markets” has been accompanied by (persistently-denied) rumours that the group used government funding to make large equity purchases whenever the market fell – giving rise to its informal moniker of the “Plunge Protection Team”.  While few still believe that the original “PPT” are busy buying the dips, a modern version may have emerged in the current combination of U.S. political and fiscal priorities.  The effect is most visible in the collapsing cost of insuring against large downside moves in the S&P 500®.

The Cboe Volatility Index (“VIX®”) provides a highly useful snapshot of short-term risk sentiment for the S&P 500 – it provides the “implied” annual volatility of the S&P 500 price index over the next month.  If volatility expectations are higher, the chance of a large down day increases.  After rising in December, VIX has been grinding down recently, closing on Monday at a paltry 12.68. 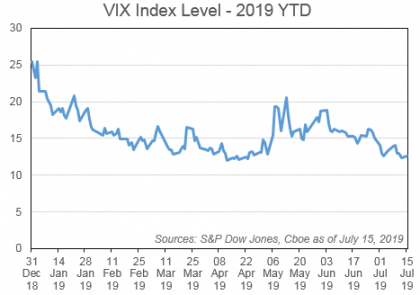 If equity returns were normally distributed, then volatility would be all one needed to know to describe equity risk.  However, they aren’t, and so it isn’t.  Instead, equity returns are negatively skewed: declines three standard deviations below the mean have occurred much more frequently than gains three standard deviations above the mean.   In fact, if we take the prior day VIX as a prediction for the next day’s (annualized) volatility, declines that should be much more rare have occurred once or twice each decade.

Note that although September 2008’s single-day decline of 8.79% is the largest in absolute terms, it was not the most “surprising” in our sample: the high reading of VIX on the previous day was already sounding the alarm of higher standard deviations.

If “tail” events are more likely than we would otherwise expect, we need to know how likely it is that a 3, 4 or 5-standard deviation move might occur (or at least, how much it costs to insure against one).  Conveniently, there’s an index for that!  The Cboe SKEW index uses the prices of S&P 500 options with different strikes to derive an implied “skew” of the distribution of future returns.  While skew has a formal mathematical definition, for practical purposes what we need to know is that its magnitude reflects the implied probability of a multiple-standard deviation loss.  Here is a chart of the implied 1-month skew in the S&P 500 for the past 15 years; we plot a 60-trading day average to illustrate the broader trend.  Notwithstanding a few bumps along the way, the series gains gradually from late 2008 through to a peak last September, but has fallen dramatically since then. 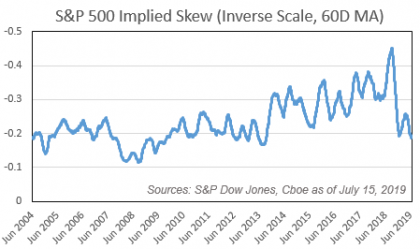 The perspectives of skew and volatility provide two dimensions in which the market can warn of a large decline.  VIX measures the cost of protection in general, whereas skew tells us if protection against larger moves is especially expensive relative to smaller moves.   Since surprises can occur even when we don’t expect them, skew has historically tended to reach its highest readings when VIX was low.  Exhibit 4 demonstrates this phenomenon based on daily closing levels over the past 15 years; the levels since the start of June 2019 are highlighted. 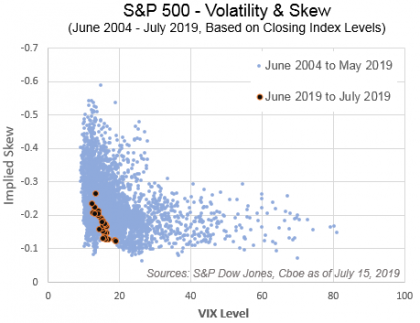 What Exhibit 4 illustrates is that – at present – options linked to the S&P 500 imply that we’re set for low volatility, and unusually low skew compared to recent times.  That means that the market is charging considerably less than usual to insure against large down movements, and while market sentiment regarding risk can certainly be wrong, it does help explain what is going on at present.

Plunge Protection … but for how long?

Of course, it is one thing to note that the market doesn’t seem worried about a nasty shock, and quite another to speculate on the causes of such potential complacency: there is a very obvious candidate provided by the combined efforts of politicians and central bankers.

The U.S. Federal Reserve has committed to keep the economic expansion going, boosting market confidence that they will turn on the taps in response to equity weakness.  The Fed’s change in course in January after the equity market selloff was a major indicator here, as was the “good news is bad news” reaction that markets gave to a healthier-than-expected jobs figure on July 5th.

But the Fed is not going it alone; the Trump administration has made it clear that they view the equity market’s performance as a validation of their efforts to support the economy, and would appear to have a keen desire to keep the markets rising at least until the Presidential election.  The combined efforts of both fiscal and monetary powers seem aligned in an effort to prevent downside equity moves … at least in the near term.