Here's Why Mid-Caps Matter As The Dollar Drops

The S&P Persistence Scorecard also provides transition matrices for managers in various quartiles. The transition matrices track the path of managers across different quartiles over time, and therefore present the probability of where a fund may end up. Exhibit 2 shows a direct relationship between the starting group and the probability of being liquidated in the next five-year period. We observe that funds starting in the top quartile, based on the past five-year period, have a 10.24%, 8.96%, 11.11%, and 10.23% change of being merged for All Domestic, All Large, All Mid, and All Small-Cap mutual fund categories, respectively. Furthermore, when the fund was in the bottom quartile to start, these statistics rise to 31.81%, 31.34%, 33.33%, and 37.5%, respectively. This means that a fund is roughly three times as likely to disappear if it started in the bottom quartile versus in the top quartile. 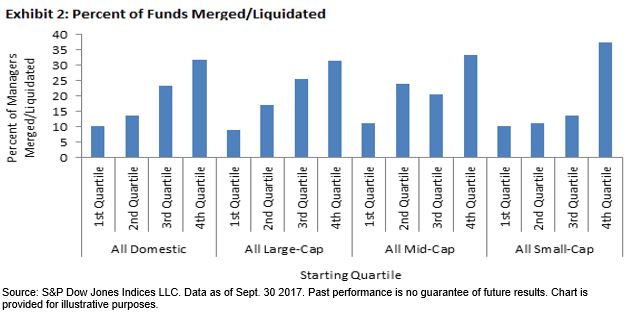 We can also note that with the exception of mid-cap managers, the relationship is strictly increasing. The implication for market participants is such that they should be aware of (and consider) the increased probability that a manager might not be around given their relative performance ranking over a certain period. While past performance does not have an impact on future performance, past performance has some correlation with the likelihood of being liquidated or not.

Past performance is often viewed as a way to select an investment going forward, even though the body of research suggests it to be a poor indicator of future results. The S&P Persistence Scorecard has repeatedly shown that past performance is not a robust metric to use when selecting active managers. Analysis such as that in Exhibit 1 shows that if a market participant were to select a manager based only on performance, there would be less than a random chance that the manager would stay in the first quartile.

Here's Why Mid-Caps Matter As The Dollar Drops

The S&P 500 just posted its best January since 1997, and also had its highest measured optimism, a 6.6% risk premium,  since October 2015.  Whether history repeats itself is yet to be seen, but just a few days after that high risk premium, the stock market topped on Nov. 3, 2015.  By December investors saw the glass as half empty, as the exuberant premium turned into a discount, and in the following period through Feb. 11, 2016, the market dropped 12.7%.

Now the stock market just logged its worst week, down 3.9%, since that last drop in 2016.  There are worries of rising inflation, interest rates and uncertainty over the dollar.  So, perhaps it is helpful to review some of the U.S. equity market sensitivities to the rising interest rates, inflation and the dollar, but in this post the focus will be solely on the impact of the falling dollar.

Since the U.S. Dollar peaked on Dec. 20, 2016, it has fallen 13.8% while the S&P 500 (TR) gained 24.3%.  While the relationship is opposite overall, when correlation is measured on a daily basis the correlation is nearly zero at 0.16.  This is not surprising since many other factors may drive the stock market on any given day.

What changed?  Many things may have changed but the decline from the tech bubble burst certainly changed the makeup of that sector.  Before the decline in 2000, the information technology sector held the biggest weight at 33% of the S&P 500, but with the stock market drop, fell almost 2/3 to just 13%, dropping in size behind financials, health care and consumer discretionary.  Today, the sector is the biggest again comprising 24% of the S&P 500.  While the market cap weight is proportionally not as large as it used to be, the foreign revenue exposure is much bigger.  The increased globalization led to more international revenue that is reflected in the S&P 500 Foreign Revenue Exposure Index where the information technology sector is the biggest by far, making up 41% of foreign revenue in the S&P 500.  This may be driving much of the opposite relationship between the S&P 500 and the U.S. dollar in at least the last decade.

Though correlation matters, especially for diversification purposes, the sensitivity of the U.S. equities to the U.S. dollar is meaningful too.  In particular, only energy and materials have negative beta less than -1 despite size, meaning it has more volatility and in the opposite direction of the U.S. dollar.  The small-cap energy sector has the biggest magnitude of negative beta of -3.14, meaning if the U.S. dollar were to fall by 10%, then small-cap energy stocks may be expected to rise 31% from that drop.  That is more than the -2.76 and -1.69 respective beta measures from energy mid-cap and large-cap.  Though large-caps may do more international business than the smaller companies, the smaller companies may have fewer resources to hedge against oil price volatility, leaving them more susceptible to the U.S. dollar moves.   Similarly the small-cap materials sector with a 1.62 beta to the U.S. dollar is slightly more sensitive than its mid and large size sector counterparts that have respective beta of 1.57 and 1.50.

Lastly, the falling U.S. dollar helps U.S. equities but mid-caps benefit most. For every 1% drop in the U.S. dollar, the S&P MidCap 400 (TR) rises 3.20% on average. This is more than the 2.63% on average from the S&P 500 (TR) and 2.96% from the S&P SmallCap 600 (TR).  The major exception to this, happens in energy where a falling dollar helps more than a rising dollar hurts, boosting the less hedged small-cap energy sector by 4.64% on average for every 1% dollar drop. The mid-caps are well positioned to grow international revenues with a falling dollar if they are on the cusp of expanding globally and need a catalyst.  While the large caps can benefit from the falling dollar, it is likely the mid-caps can capture more new business with the global growth opportunity.  Mid-caps are also positioned generally better than small-caps for international business due to their greater size and resources.

Knowing which sectors are exposed to which countries can help determine how to benefit most from the falling U.S. dollar.  Also, the distinct market cap split that the S&P 400, 500 and 600 offer is important for intentionally getting exposures and improving risk management as macro economic factors move.

Over the past five years, the more worrisome government-issued debt in Europe has made significant progress in managing the normal mechanism of higher-perceived risk equaling higher yields. The Wall Street Journal focused on Portugal’s debt in their article, “Decade of Easy Cash Turns Bond Market Upside Down”. Quantitative easing (QE) by the European Central Bank (ECB) not only lowered rates to spur economic development in the region, but it also seems to have eased concerns about the risks of buying from some of the heaviest debt-ridden European countries. The negative yield environment created by the ECB’s QE program pushed investors to find higher yields in countries with higher risk profiles. Portugal, Italy, and Spain have all seen yields tighten significantly over the past five years, as measured by the S&P Portugal Sovereign Bond Index, the S&P Italy Sovereign Bond Index, and the S&P Spain Sovereign Bond Index, respectively. As of Jan. 31, 2018, yields for the overall indices saw both Portugal and Spain below 1%, with Italy hovering above 1% at 1.12%. Yields for all three indices have tightened from a range of 3.28%-5% back in the beginning of 2013 to a range of 0.79%-1.12%. When compared to the yield of U.S. Treasuries (2.36%), as measured by the S&P U.S. Treasury Bond Index, one may wonder what the reaction will be when the ECB reverses QE. While all four countries have different durations between 5.24 and 6.47, the U.S. has the shortest duration of them all, with the lowest risk profile and the highest yield.

In November 2017, S&P Dow Jones Indices and MSCI announced revisions to the GICS® structure to be implemented in September 2018.[1] These changes are going to affect the consumer discretionary, information technology, and telecommunication services sectors. As a consequence, the Pan Asian internet giants BAT (Baidu, Alibaba, and Tencent) will be reclassified into the communication services and consumer discretionary sectors.

The key GICS structure changes are summarized as follows.

These changes could result in a significant impact on the composition, valuation, and performance characteristics of the sector indices. Based on the select list of large-cap companies with new GICS information released in January 2018,[2] we compiled the sector weights, return beta, and P/E of the three GICS sectors for the S&P Pan Asia LargeCap Index with the new GICS definitions (see Exhibits 1 and 2). The key observations include the following.

Overall, 17 companies from the S&P Pan Asia LargeCap Index will be affected by the revision to the GICS structure, according to the list announced by S&P Dow Jones Indices and MSCI in January (see Exhibit 3).

Apparently, the revisions to the GICS structure will result in significant change to the risk/return profile and fundamental characteristics of the consumer discretionary, information technology, and communication services sectors. Market participants should be mindful about these changes when evaluating these sectors in their asset allocation or investment analysis. 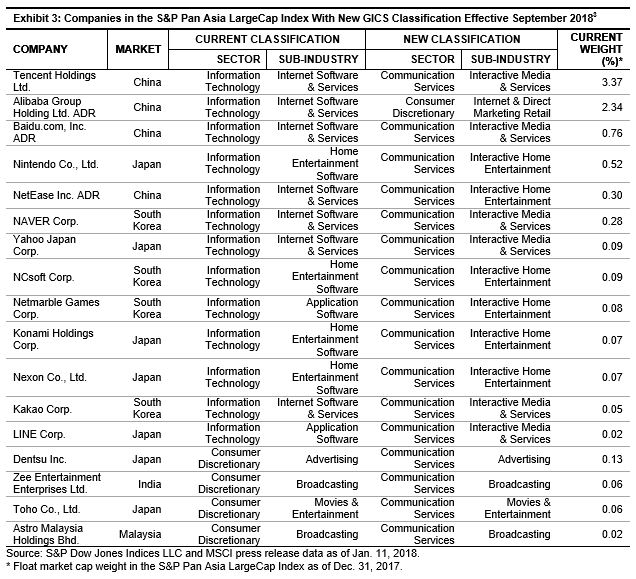 [3]  Note that the new company classifications are subject to change before implementation due to ongoing reviews, including for corporate events. For more details please see https://spindices.com/documents/index-policies/gics-changes-announcement-01-10-18.xlsx.

With a yield-to-maturity average spread of more than 335 bps for the past three years, it is interesting how the first group behaved similarly (without taking into account the credit crisis in 2007-2008). The second group’s behavior was expected due to the currency; the correlations are shown in Exhibit 3.

In times of volatility and when searching for yield, Mexico may provide a good portfolio diversification with the extra yield for those seeking it given the correlation between Mexico and U.S. corporate bonds, as well as with their 2017 performance.