A New Eden, Or Fewer Excuses

China’s Bank Stress Test and its Exposure to Environmental Risk

A New Eden, Or Fewer Excuses

In our May dispersion dashboard, we note that “If there is ever such thing as a “stock-pickers’ market”, then the month of May 2017 – at least in some regions – might be the closest approximation we have seen for a decade.”

The subject of what, exactly a “stock-pickers’ market” might look like, and how we would know when we are in one, has been a topic of extensive study and regular commentary.  First, we should explain what we mean by a “stock pickers’ market”.

One definition of a “stock pickers’ market” is a tailwind for concentrated bets, even if they are made by the unskilled investor.  Such an environment can be identified by the performance of equal-weight indices, since – if equal weight outperforms the cap-weighted benchmark then, by definition, the average stock outperforms.  The fortunes of concentrated portfolios, such as those maintained by a traditional stock-picker, are also impacted by the level of market skewness, among other factors of importance.

Alternatively, a “stock-pickers’ market” can mean that those stock-pickers with genuine skill (or luck) are particularly distinguished from those with less skill or less luck.  This is quite a different scenario to the one in which the “average” stock-picker is more likely to outperform – and with different characteristics:

The charts below show the levels of dispersion, correlation and volatility recorded in the month of May in several of the major markets covered by S&P Dow Jones Indices.  The charts place each measurement in their historical context: the level for the most recent month is the coloured dot; the light grey bars represent the middle 90% of all observations in the past decade, while the dark grey bars represent the middle 50%.  A single black line represents the historical median:

In several of these regions, most notably in countries such as Australia and Japan, and in market segments such as U.S. small caps, as well as across the broad-based S&P Developed ex-U.S. LargeMid BMI universe, benchmark volatility and average stock correlations stand at or near record lows, while dispersion has risen  above average.

Raising the stakes, May was also a month in which there were headwinds for the unlucky, and the unskilled.  As reported in our standard dashboards, equal-weight indices under-performed in the U.S. and in Europe, while smaller stocks outperformed the very largest more generally across Asia.

What does this mean for active mangers?  The month of May, 2017 provided an example of market circumstances favouring the skillful or lucky stock-picker, but not the average.  And while one swallow does not make a summer, if such an environment should persist through the rest of the year, then there will be fewer excuses for poor performance at the end of it.

Canada’s economy has been accelerating due to increased consumer spending and a rebound in business investment.  Consumer spending driven by vehicle purchases and real estate investment has lifted the economy, along with improved business investment.  The economy and its growth trend now appear to be on a more secure path.  As of May 31, 2017, the S&P/TSX Composite returned 1.50% YTD on a total return basis.

Such growth should eventually lead to an increase in overall prices, which to date has not occurred.  The CPI, as measured by Statistics Canada, was valued at 1.6% for April 2017.  In the near future, more eyes will be on the CPI and the S&P Canada Sovereign Inflation-Linked Bond Index, which returned 1.96% YTD as of May 31, 2017.

Given such an outlook, the Bank of Canada might be moving closer to an interest rate hike.  As of May 31, 2017, the yield of the S&P Current 2-Year Canada Sovereign Bond Index was just 0.7%, compared with the U.S. two-year Treasury Bond yield of 1.28%, as the U.S. Fed contemplated an additional rate hike as soon as June 2017.

The Canadian dollar, also endearingly known as the “loonie” after the bird on the currency, has been and continues to be weak against the U.S. dollar.  Canada’s many lakeside resorts and destinations should be a bargain to many vacationing U.S. residents this summer.

The S&P Canada Investment Grade Corporate Bond Index has had consistently positive returns each month this year.  As of May 31, 2017, the index returned 3.19% YTD.  The sectors of the Canadian bond market vary, with financials (59.1%) and energy (10.4%) dominating in terms of market value weight, though their returns for the month, at 0.15% and 0.21%, respectively, lagged behind the leading sectors of health care, at 1.95%, and industrials, at 1.38%.

No single sector dominated commodity performance in May, which means the supply-side is currently more potent than macro factors like global aggregate demand, the dollar, interest rates or inflation.  Each commodity is being driven by something in its own supply/demand model, mostly unrelated to one another.  That is not just lowering the intra-commodity correlation that can create buying opportunities but has lowered the correlation between stocks and commodities, bringing to light the important role commodities can play in diversification.

Not only is the diversification an important result but the supply issues matter to the inventory re-balancing process   In May, there were a record 9 new commodities with a positive roll return, reflecting backwardation from shortages.  There have never been this many commodities swinging simultaneously from negative to positive term structures, so that might be a bullish sign ahead of the summer.  However, the term structure hasn’t turned positive yet for unleaded gasoline despite its rise in May even in the face of falling oil.  Typically if Brent crude falls, unleaded gasoline falls slightly more with a down market capture ratio of 107, but when Brent crude rises unleaded gasoline typically increases with an up market capture 109.  If commodities of not just the same sector but the same component are decoupling, and Brent crude is not dragging down unleaded gasoline, not only is that bullish, but it makes a  more compelling diversification argument.

Factor investing has continued to gain momentum in recent years, but the strategy has been predominantly adopted in the developed markets, and research on factor-based strategies in emerging markets remains scarce.  Emerging markets (as measured by the S&P Emerging BMI) returned -13.52% in 2015 but recouped most of the losses in 2016 with a return of 11.3%, and they advanced 13.62% in the first four months of 2017. With the rebound, market participants may find that there are ample opportunities offering value in emerging markets.  As such, a value-based strategy combined with momentum could help identify cheaply priced securities that are on the upswing.

Adopting the metrics behind the S&P Enhanced Value and Momentum indices, we used three fundamentals—book value-to-price, earnings-to-price, and sales-to-price—to proxy the return to value factor, and a stock’s 12-month price change adjusted by its volatility is used to capture the price momentum.  The weight of a security in the portfolio is the product of its factor score and its float-adjusted market cap.  The portfolios were rebalanced on a semiannual basis in June and December. 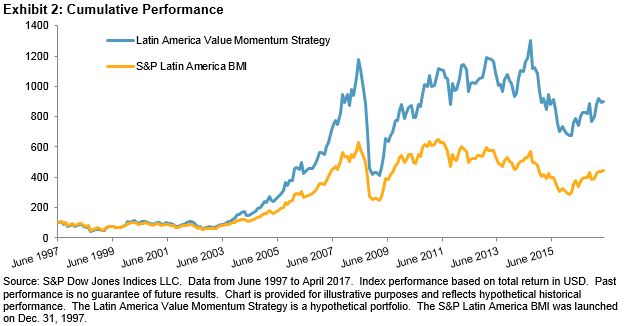 The multi-factor strategy produced an average monthly return of 1.39%, compared to the 0.99% return of the broad market.  The most noticeable performance differential can be seen over a longer time frame (five years or more).  The strategy demonstrated risk-adjusted returns of 0.13 and 0.52 in the 10- and 15-year periods, respectively.  Both figures are significantly higher than benchmark’s 0.03 and 0.42 risk-adjusted returns over the respective periods.  The result is less effective in short-term, as shown in three-year time horizon, with a -0.27 risk-adjusted return for the strategy versus the benchmark’s -0.18 (see Exhibit 3). 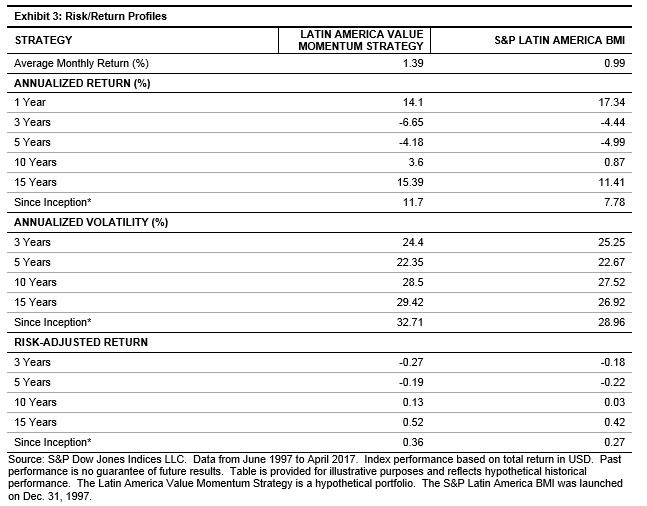 Our analysis of the combined value and momentum strategy in Latin America shows that factor-based investing can work effectively in the region over the long-term investment horizon.  The same strategy may deliver different results in individual Latin American countries due to specific market conditions, which is discussed in our related paper “Value and Momentum Strategies in Latin America” and will be also explored in upcoming blogs.

China’s Bank Stress Test and its Exposure to Environmental Risk 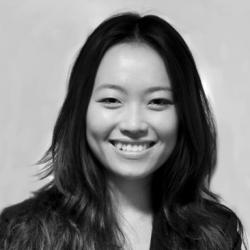 In just over two years, China has developed a policy framework for green finance that aims to shift capital from “brown” fossil fuel industries to “green” low-carbon technologies. We have also seen impressive growth in Chinese green bond issuance that has taken the world by surprise. On joining-up green finance policy and practice, China is increasingly “the one to watch.”

However, scaling up green finance still faces challenges. According to Dr. Ma Jun, chief economist at the People’s Bank of China and director of China’s Green Finance Committee, the biggest problem is effectively internalizing environmental externalities, reversing underinvestment in green projects and overinvestment in brown projects.[1]

To address this issue, Trucost collaborated with the Industrial and Commercial Bank of China (ICBC) and the Green Finance Committee to assess and quantify the environmental externalities of major sectors in China. We recently published a tool for banks and other market participants to assess the potential internalized costs and environmental risks of their investments, using the aluminum sector as a case study.[2] The research identifies key risk factors, including environmental taxation, abatement costs and water scarcity, and quantifies their future cost internalization pathways.

The results showed that primary aluminum and alumina operations in China were most exposed to high costs driven by environmental risk factors. Environmental taxation was the largest cost, accounting for as much as 20% and 13% of the average price of alumina and aluminum ingot, respectively, in the high-stress scenario. Plant operators might find it more economical to opt for early installation of abatement to reduce long-term costs. As a result, they could benefit from emissions trading by selling permits.

ICBC stress-tested their credit in the aluminum sector against the implementation of an environmental tax in 2018. The bank applied the low-stress scenario, assuming that the tax would be implemented at the lower end of the proposed rate and remain constant across provinces over time. As a result, only a small number of corporate credit ratings would be downgraded.

ICBC also found that high-rated companies in its portfolio would be more resilient to the costs of the environmental tax. The probability of default among these companies is minimal, as they are often leading enterprises with strong performance.

Understanding how environmental externalities could be internalized by stress testing loanbooks and portfolios could help financial institutions better manage risks associated with the environmental impacts of their investments. If done at scale, it could channel much needed capital to greener assets, while limiting the flow to high-impact sectors.

It would also demonstrate a strong and constructive response to the Financial Stability Board’s Task Force on Climate-related Financial Disclosures,[3] whose draft recommendations due to be launched at the G20 conference in July 2017 call on organizations to conduct scenario analyses of the risks and opportunities that they face as a result of climate change.