Regime Change? Not according to the VIX term structure…

MidCap: A Sweet Spot in the Indian Equity Market

Ingredients in a Multi-Factor Recipe

Regime Change? Not according to the VIX term structure…

Since the U.S. election, a degree of optimism over potential business-friendly legislation – ranging from tax reform to infrastructure spending – has played a significant part in sending benchmarks such as the S&P 500 to new all-time highs.  Whether this optimism will be justified by actual legislation, of course, is a different issue.

At a minimum, recent political developments have the potential to distract the attention of the Trump administration and U.S. Congress, at least in the near term.   But their greater consequence is uncertain.  For example, how should we interpret the fact British bookmakers are offering better-than-even odds on Trump failing to complete a full first term, when the same sources told us Trump had an 80% chance of not being President in the first place?

Both equity and volatility markets provide an inconclusive verdict.  The S&P 500 fell by 1.8% yesterday: this was the biggest daily move since November, but definitely “small potatoes” within a broader historical context.  Far more dramatically, the VIX soared by over 46% yesterday: a huge swing and among the largest daily changes so far this decade.  Yet the gain was only large in percentage terms; VIX remains well below its long-run average, having risen from near-record lows.

In fact, things are looking a little nervous in U.S. equities … but not yet anywhere near panic.  The VIX futures curve gives a broader perspective: 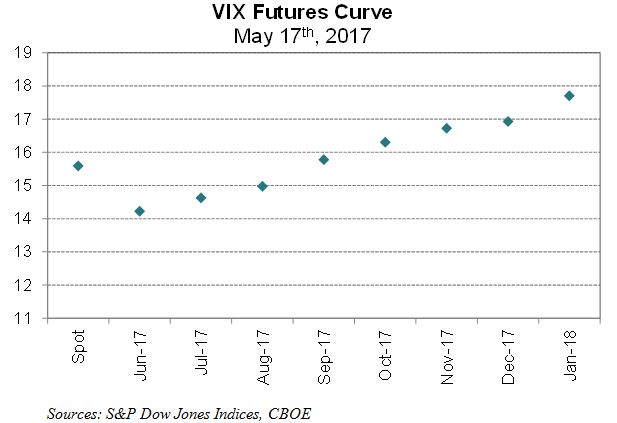 The VIX futures curve is typically upward sloping in the shorter maturities, i.e. VIX futures normally trade at a higher price than the underlying index, especially when the VIX is low.  Indeed, at no point since 2007 has there been a VIX below 16 accompanied by a front VIX future more than a whole point below it – until yesterday, when the VIX closed at 15.59, while the June future closed at 14.23.

This rare occurrence suggests that the current volatility spike is being treated by market participants as a temporary repricing, instead of a structural regime change.

MidCap: A Sweet Spot in the Indian Equity Market

The mid-cap space has often been described as the “sweet spot” of equity investing—and with good reason.  Mid-cap companies tend to offer a balance between the high growth (and high risk) offered by small caps and the stability (but relatively slower growth) of large caps.  Additionally, Indian mid-caps have a more diverse sector representation than large caps, which have a relatively higher weight in the BSE sector of finance (32%), while small caps have a relatively lower weight in energy.  Over the long term, these unique characteristics have helped India’s mid-cap segment outperform all other size categories on an absolute and risk-adjusted basis (see Exhibits 1, 2, and 3).

Source: Asia Index Pvt. Ltd.  Data from Sept. 16, 2005, to April 28, 2017.  Index performance based on total return in INR.  Past performance is no guarantee of future results.  Charts are provided for illustrative purposes and reflects hypothetical historical performance.  The S&P BSE LargeCap, S&P BSE Midcap, and S&P BSE SmallCap were launched on April 15, 2015.  The S&P BSE MidCap Select and S&P SmallCap Select were launched on June 15, 2015.

A unique combination of potential for higher growth than large caps and relatively better stability (lower volatility) than small cap, along with diversification across BSE sectors, has led the S&P BSE MidCap and S&P BSE MidCap Select to outperform their large- and small-cap counterparts over the long term.

Ingredients in a Multi-Factor Recipe 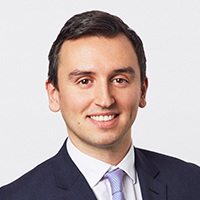 In our previous blog on multi-factor merits, we discussed the diversification benefits of combining equity factors.  We highlighted how multi-factor indices may generate more stable excess returns, while avoiding the risks inherent in timing factors.  But to achieve this, can market participants just throw lots of factors into a pot and hope for the best?  Or should a little more care be taken in selecting a blend of ingredients?

The secret ingredients in S&P DJI’s latest multi-factor index are no secret at all; the S&P 500® Quality, Value & Momentum Multi-Factor Index uses just three key factors—and they are printed right on the label.

Determining whether this combination of factors (or any other) is sensible and likely to be effective requires following a simple checklist.

In the case of quality, value, and momentum, not only are their risk premiums widely documented and accepted in academic research, but the correlations between their active returns are often low or negative.  To understand the economic rationale for this multi-factor combination, it may be helpful to think of the aggregate portfolio in terms of a single synthetic target stock.  This synthetic stock has the attributes of quality, value, and momentum simultaneously.

Inexpensive stocks are generally desirable, providing they do not represent value traps.  Requiring that the stock has momentum suggests that the market has become increasingly optimistic about the company’s prospects.  Therefore, the stock can possibly be picked up while it is still at a relatively low multiple.  Focusing the search on high-quality companies can further reduce the value trap risk.  High return on equity, a low accrual ratio, and a strong balance sheet with low leverage all indicate a company with an adequate margin of safety that is capable of meeting challenges in the market.

To complete the final step on our checklist, we shall look at the sources of the returns of the S&P 500 Quality, Value & Momentum Multi-Factor Index.  To do this, we have calculated the regression coefficients of the historical returns of the index against the active returns of several single-factors.  Orthogonal returns were generated for each factor by stripping out any correlations between their active return series.  This leaves us with entirely independent, systematic factor returns that explain the vast majority of the performance of our multi-factor index. 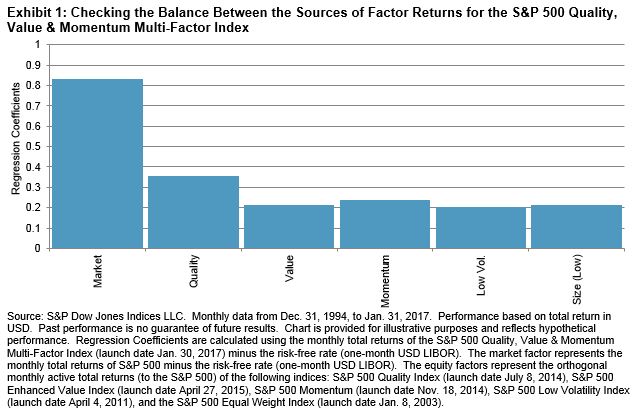 It is evident from Exhibit 1 that the multi-factor index demonstrates reasonably balanced exposure across the returns of the desired factors, in addition to significant market beta.  This balanced output is in part due to the equal-weighted approach used in creating each stock’s multi-factor score.  It is also an indication that the interactions between the various factor scores are not causing any particular factor to become overly dominant.  Changing or increasing the number of factors used in the selection process may have an unexpected impact on this balanced exposure.

Interestingly, but not surprisingly, the multi-factor index benefits from additional exposure to the low volatility and size factor returns.  Since the momentum scores used are risk adjusted, the low volatility factor gets in through the back door.  As for the index’s smaller-cap bias, the final weights are generally tilted away from the market-cap-weighted benchmark because the weighting method incorporates the multi-factor scores.

So although the recipe for the S&P 500 Quality, Value & Momentum Multi-Factor Index targets just three factors, it is evident the final returns benefit from a generous handful of the low volatility and size factors for good measure.

For a more detailed overview on S&P DJI’s approach to multi-factor indices, please see “The Merits and Methods of Multi-Factor Investing.”

What is a value trap?
While value can be an appealing investment strategy, identifying value opportunities is not as easy as it might appear. One of the drawbacks of value investing is the so-called “value trap.” A value trap occurs when a stock appears cheap, but is trading at low multiples due to underlying problems with the stock’s issuer. In other words, the stock is cheap for a reason and could trade even lower in the future. Changing industry conditions, secular shifts in technology, and management miscalculations can lead to value traps. Further, some valuation measures may be backward-looking when the market is pricing the future. 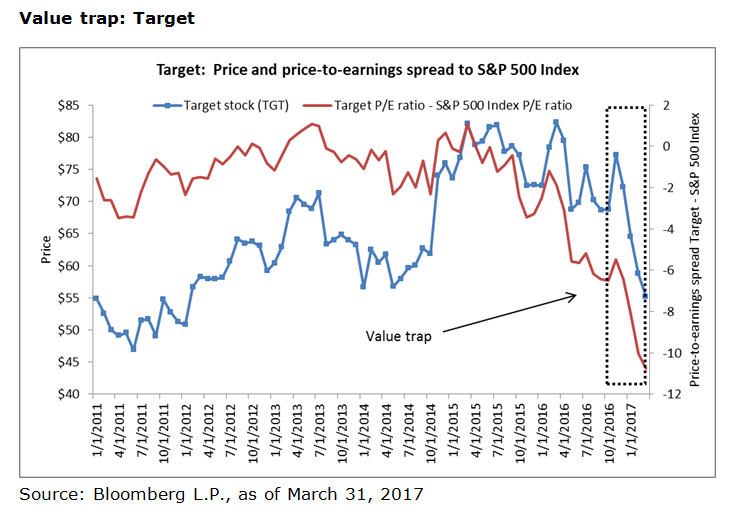 In retrospect, Target’s valuation compression appeared linked to competitive pressures, a long-term trend toward online shopping, and changing consumer preferences and buying habits. Whatever the reason, Target’s stock price decline in the face of a low P/E ratio illustrates how difficult and risky ascertaining real value can be. 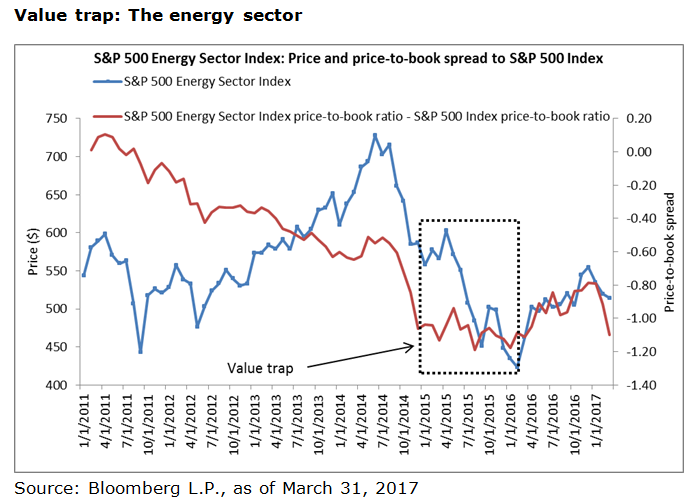 Another interesting case of a value trap can be found in the energy sector. (Given the high volatility of energy P/E ratios, I use price-to-book ratios in this example.) On a price-to-book basis, the spread between the S&P 500 Index and the S&P 500 Energy Index went from 0.10 in April 2011 to -1.04 by the end of January 2015. Despite these low valuations, the price of the S&P 500 Energy Index retreated another 24% over the ensuing 12 months. So, even though the energy sector had become more attractively priced, energy prices continued to drop — again highlighting the difficulty in discerning value. By contrast, the S&P 500 Index declined only 3.1% across this same period.

The energy sector’s valuation compression was based on the surprising weakness in oil prices, which are a key determinate of energy company revenue and profitability. Front-month West Texas Intermediate crude oil futures were priced at over $100 per barrel in June 2014 and had plunged to less than $35 per barrel by March 2016. The increased use of fracking — a disruptive technology change — played a key role in the energy sector’s value trap. Even though fracking was not a new concept in 2014, its impact on production, coupled with an ongoing economic slowdown, contributed to valuation compression within the energy sector.

Overcoming value traps
One way to overcome value traps may be to combine the value and momentum factors. This is because the value factor can screen for stocks that are attractively priced, while the momentum factor looks for stocks that have recently demonstrated strong risk-adjusted returns, which may help reduce the probability of buying into a value trap. Rising value stocks may be a sign that value is being unleashed and a stock is moving toward its intrinsic value.

Of course, there is always the risk that momentum stocks fall out of favor as market conditions shift.  Companies can report bearish business developments that can reverse a positive price trend and catch investors leaning the wrong direction. Moreover, the momentum factor can struggle during periods where investors are reducing risk and asset returns are highly correlated.

The momentum factor may also provide an opportunity to manage risk. This is because value stocks showing poor momentum can be removed from a portfolio (depending on when it reconstitutes), reducing the chances of continuing to hold a value trap.

Single factor “smart beta” indicized strategies that were once exclusive to the realm of active management.   Multifactor indexing is beginning to garner much interest as the newest chapter of index innovation.

It’s a natural conjecture that if single factors are successful, combining more than one factor should prove even more beneficial.   While any combination of two successful factors theoretically offers a diversification benefit, some combinations amount to more than the sum of their parts.  The benefit of a combination depends on the risk/return profile of the individual factors and the correlation between them.  Even if the risk/return profiles of factor indices are similar, some factor pairings can result in greater diversification benefits by lowering tracking error and raising information ratios.   For example, in the illustration of S&P 500 Low Volatility Index and the S&P 500 Momentum Index combination below, any allocation between the two factor indices offers a better risk/return payoff than either index combined with the S&P 500.  But while Low Volatility offers a much better risk/return payoff on an absolute basis, a 50/50 blend of the two factor indices yielded a much higher information ratio. 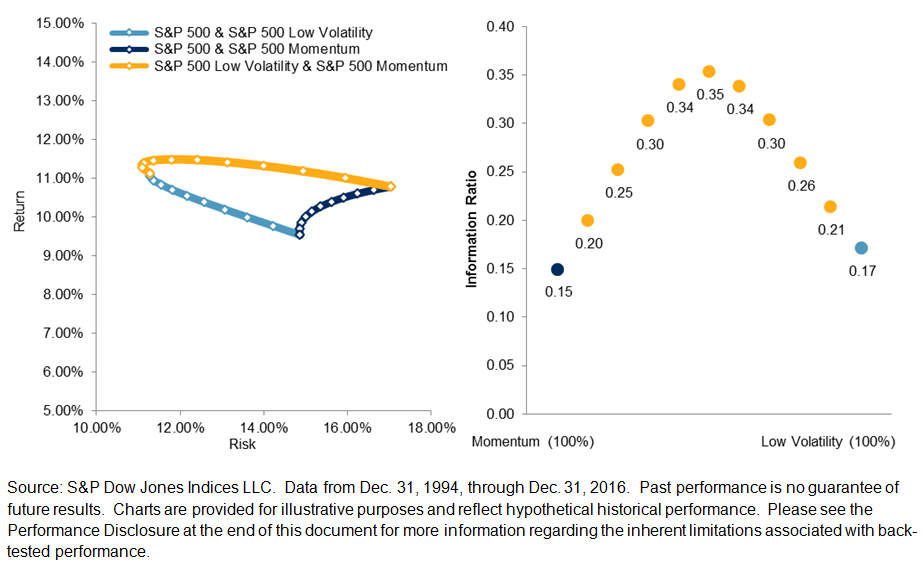