Broadly speaking, stocks within the same sector are often exposed to similar risk factors.  Investors with large energy sector exposures have certainly been reminded of this over the last six months.  This is precisely why segregating the U.S. equity universe by sector has been so appealing to investors over the years.  Over the last 16 years, the average annual return differential between the best and worst performing sector has been nearly 40%.

At their core, factor-based equity portfolios are nothing more than groups of securities that share common characteristic(s).  For example, the S&P 500 Pure Value Index includes members of the S&P 500 with the most attractive valuations as measured by earnings per share, book value to price value ratio and sales to price ratio.

Four of the five factor indices tilt significantly – greater than 10 percentage points – away from the individual sector weights of the S&P 500.  This should not be worrying in the least bit.  If a portfolio looks exactly like a market-cap benchmark, then we surely can’t expect it to do any better than a market-cap weighted benchmark in helping an investor achieve investment goals.

However, it does highlight the need to keep an eye on sector exposures as factor products are incorporated into investor portfolios.

Our U.S. Factor Defensive Equity strategy holds all five of the factors discussed in inverse proportion to their volatility.  The weights in our portfolio as of 1/31/15 are shown below.

By building a diversified factor portfolio we are able to increase sector diversification relative to the broad market. 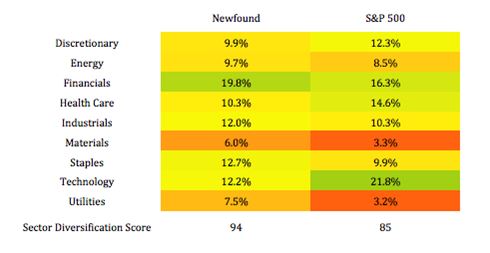 One final point to keep in mind is that by definition factor-based portfolios and indices will rebalance more often than a market-cap weighted benchmark as the characteristics of the stocks in the overall universe change.  Naturally, these rebalances mean that the sector allocations will change over time.  The velocity of these changes will vary on a factor-by-factor basis.  More frequent changes will be seen in factors that have a price component, including value and momentum.

As investors have been interested in oil, questions have come up about the enhanced roll for agriculture since it can also be difficult to store. To shed some light on the return enhancement in agriculture, below is an analysis comparing the S&P GSCI Enhanced Agriculture Select and the S&P GSCI Agriculture Select.  The analysis in the “select” version is easier to understand given just four commodities: Chicago wheat (wheat), corn, soybeans and sugar.  The enhanced rolls are seasonal and are as follows:

The weights are based on world production and notice through time since 1995 that wheat has decreased while soybeans have increased but corn and sugar have been more cyclical. The chart below shows the daily historical weights of each commodity in the S&P GSCI Agriculture Enhanced Select. On average wheat was 33.2%, corn 32.9%, soybeans 19.2% and sugar 14.7%. Wheat is now 27.4%, less than its historical average. Sugar is currently at 13.0%, which is also less than its historical average. Corn and soybeans are currently weighted at 35.1% and 24.6%, both above their averages. 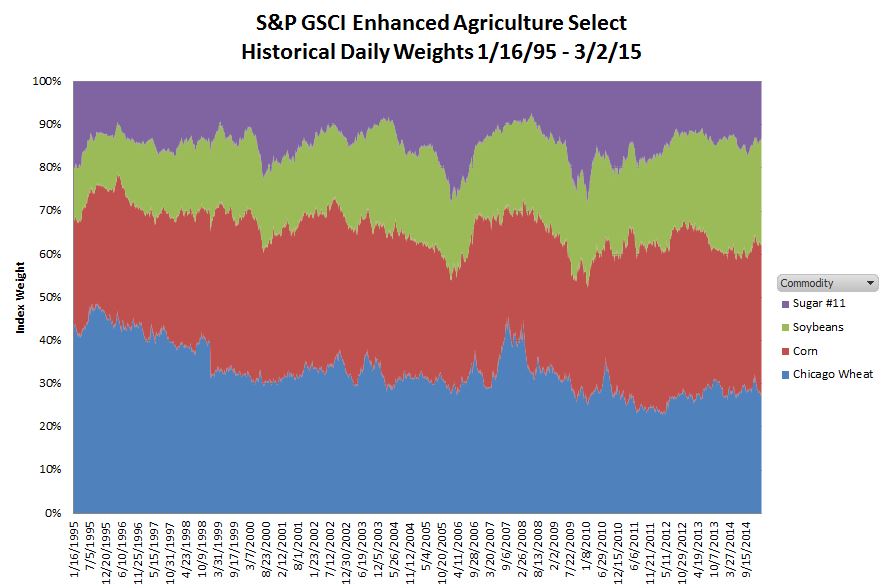 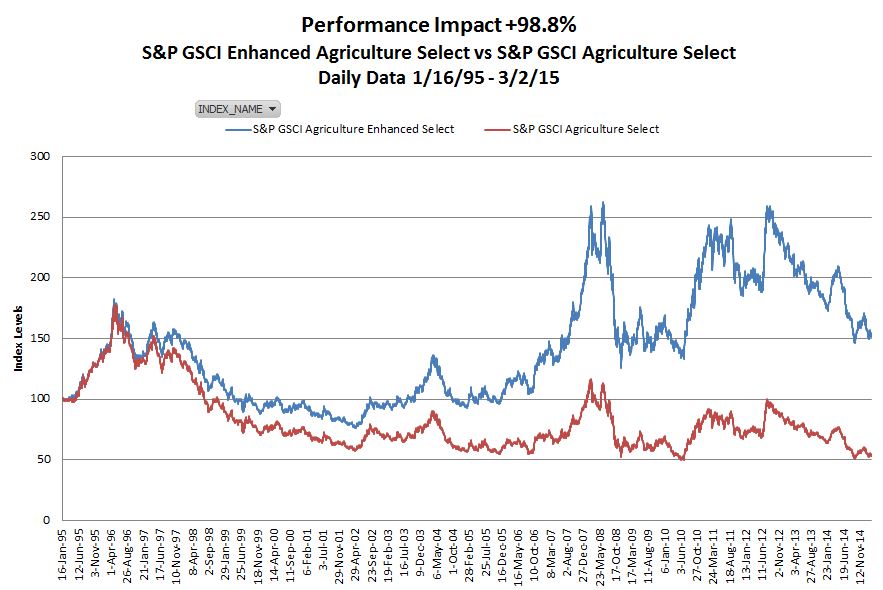 This is important since there is evidence the commodities “to be grown” have fallen in price through time. One study done by Bessler and Wolff in Aug., 2014, showed “while aggregate commodity indices, industrial and precious metals as well as energy improve the performance of a stock-bond-portfolio for most asset-allocation strategies, we hardly find any portfolio effects for agricultural and livestock commodities.” Further, according to this study by Jacks, real prices for “commodities to be grown” fell by roughly 33% in real terms from 1950.

However, when the rolling of agriculture futures contracts is employed strategically according to seasonal adjustments, it has been significantly positive.  The chart below shows the difference in monthly roll yield (excess return – spot) of the S&P GSCI Agriculture Enhanced Select less the S&P GSCI Agriculture Select. On average, the enhanced roll added 39 basis points per month.  Cumulatively, this has compounded to add 144.7% from Jan 1995 – Feb 2015.

If Jacks is correct in pointing out the transition from fixed capital accumulation to a consumption-based economy, and suburbanization is tentatively beginning, then it may be likely to see an increase in demand for goods “to be grown” and an inflection in long-run trend. The sub-trend pricing for goods “in the ground” could be the formation of a new cycle in the medium run. So if it is time for agriculture, an enhanced roll might make sense.