Today’s New York Times headlined an article, “The Everything Boom: How it Might End” (here) pointing out that prices in almost every asset class have reached stratospheric levels driven by low interest rates and easy money.  The article suggests three ways the boom might end: The good where the economy grows into currently high asset values and interest rates slowly rise; the bad where the economy stagnates and investment returns fade towards zero; or, the ugly where inflation or some crisis leads to collapse.  It missed a fourth – today’s irrational exuberance evaporates when people realize how far prices are from any fundamental values.

Rather than argue about the future, is there anything investors who fear the end can do now? Consider cash.  Shifting part of an investment to cash from stocks, bonds or commodities reduces its volatility and shrinks the size of the maximum drawdown while trimming prospective returns. Cash earns zero return with zero volatility.  The attractive part is the zero volatility.   Inflation is a risk to cash since rising prices makes the cash worth less. However, it is a slow moving risk compared with falling stock and bond prices: 10% annual inflation is quite high, hasn’t been seen in the US since the early 1980s and would take time to become part of the economy; a 10% drop in stocks or bonds can happen in a matter of days or weeks. 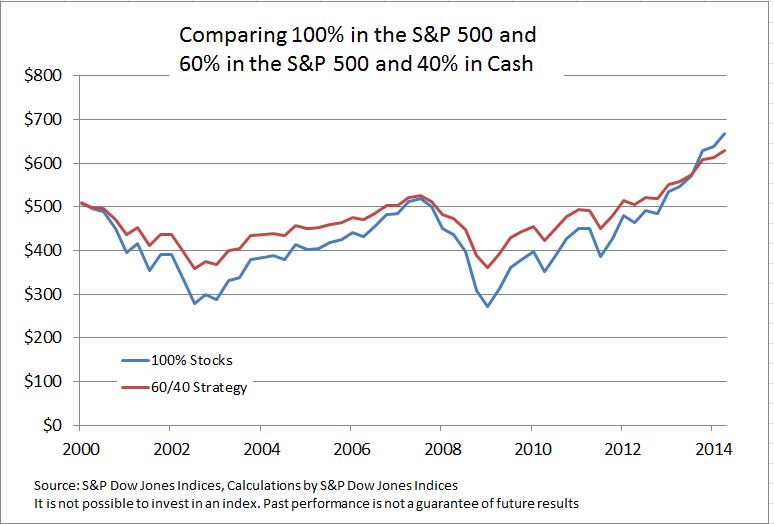 Cash is not always the answer though.  Had one started the same comparison with the fourth quarter of 2002 – the end of the Tech bust – the results would have been different. The 100% in stocks choice would have out-performed the 60/40 strategy except for a few quarters and ended with a spread of about 25%. The volatilities differ only slightly due to a different time period and the maximum draw downs (which occurred during the financial crisis) are the same.  While the moment to switch some holdings to cash is the peak of a market cycle, no one knows the peak until long after it happens.

A final thought to how the Everything Bubble might end is that under each of the scenarios mentioned above investment returns will fall.

Tagged:
cash
The posts on this blog are opinions, not advice. Please read our disclaimers.