Recently at a panel discussion that I participated, one topic we talked about was if the bond price volatility in Asia is an obstacle to the investors. I believe it is a common misconception in the market.

A volatility analysis was run on the local currency denominated bonds of the 10 countries that tracked by the S&P Pan Asia Bond Index, which are China, Hong Kong, India, Indonesia, Korea, Singapore, Malaysia, Philippines, Taiwan and Thailand. Excluding the relatively high volatilities in Indonesia and Philippines, most countries have an annualized volatility around the 2% level. Interesting to note, while Indonesia and Philippines bond markets are more volatile, they also have the strongest growth in size among the 10 countries, as they expanded more than fourfold and threefold since December 2006.

We also compared the five-year annualized volatilities of the S&P Pan Asia Bond Index (denominated in USD) with other major bond markets, such as the U.S. treasury, U.S. investment grade corporate, U.S. high yield corporate, Eurozone sovereign and Australian bond markets, see the exhibit below. It is observed that the bond price volatility in Asia (even accounting for foreign currency fluctuations) is not necessarily higher than the other major markets. In fact, the S&P Pan Asia Bond Index has been historically less volatile than the S&P U.S. Issued Investment Grade Bond Index for the periods of one-year, five-year and since December 2006.

The S&P Pan Asia Bond Index is designed to provide a broad and independent benchmark for the local-currency denominated bond markets. Country-level and sector-level indices are available.

On May 27th, 2014 an article appeared in the Wall Street Journal titled “New Costs From Health Law Snarl Union Contract Talks”. This article provides an interesting insight into the challenges both employers and Unions face under the Affordable Healthcare Act as they try to determine the future cost of health plans that have been in place for decades in many cases. Putting a specific financial value on the cost of a health plan for a period of 3 to 5 years, particularly a known plan covering a known group, should be a relatively routine task. However, under our current insurance/ASO structures, there is no way to lock in such a cost over a multi-year period. Either the employer is at risk if actual costs exceed the projections, or the union must accept a very high risk charge to cover the worst case cost of the health plan. Regardless of how the issue is resolved, the situation is a lose-lose environment for both parties.

This is a situation for which the S&P Healthcare Claims Indices can be utilized. With the introduction of the S&P Healthcare Claims Indices both employers and labor now have a common measure of the average market rate of healthcare cost changes (trend) for any time period. By utilizing the indices, the two parties can now take advantage of several options to structure solutions to resolve the problem. Consider a couple of relatively simple examples:

Futures contracts are a well understood mechanism and have demonstrated their value across any number of markets. Is their utilization as to hedge against future health care costs just the next step in this financial structure’s evolution? The index linked approach would also work much the same way as reinsurance or catastrophic insurance in other insurance markets, with the indices being used as the final settlement value to the cost guarantee.

The European Central Bank (ECB) announced negative interest rates. The rates apply only to certain funds that banks keep on deposit at the central bank. Negative interest rates do not apply to individuals’ bank accounts. If a bank has one million euros on deposit with the central bank, a year later it will have a thousand euros less – it will have paid interest to leave the money in the central bank.  And that is exactly why the ECB is charging for holding the money – it wants banks to loan the money to businesses to encourage investment and economic recovery.

This unusual move – tried once or twice before in other countries with little result – is because the European economy is weak and prices are on the edge of falling into deflation.  The ECB describes this as the logical extension of normal monetary policy: when inflation is too high, the central bank raises interest rates in an effort to deter borrowing by making it more expensive. When inflation is too low, prices are close to falling and the economy is weak, the central bank cuts interest rates.  The latest reductions announced today (June 5th) pushed interest rates down with the rate for refinancing operations, similar to the Fed Funds rate in the US, at 15 bps. To keep a 25 bp spread above the rate paid on bank deposits at the ECB; the deposit rate was reduced to -10bps.

This isn’t likely to create a surge of bank lending overnight. First, the drop into negative numbers seems as much a symbolic statement as a serious plan to charge banks.  Second, there are not too many immediate options for banks. They could withdraw deposits from the central bank and hold the funds as currency.   The amounts are sufficiently large that where it is stored, and how it is protected, are real issues. A bank could try to deposit the funds in another bank, but this just means a lot of liquidity looking for a home.  Hopefully the news of negative interest will encourage business to spend or invest once they realize that money is (almost) free, for the moment.

Deflation is both a sign of economic weakness and a real danger.  In a weak, no growth economy there is no pressure on prices, little demand for most goods or services and flat to falling wages as unemployment rises.  Falling prices signal spreading economic malaise.  Deflation can be a greater danger – when prices fall, just about everything except for cash is worth less; cash is worth more because each dollar buys more.  In effect, dollars are more expensive.  A borrower needing money to repay a loan must work longer and harder to repay the loan because his labor is worth less. This debt-deflation spiral can send an economy into a deep recession or worse.  This is why the ECB and others fear deflation.

Climate scientists are predicting record breaking global temperatures from an El Niño expected this year that could boost commodity prices from further disruptions in the supply chain.  This year has already been chock-full of supply shocks across many commodities such as nickel, natural gas, coffee and hogs, creating critically low inventories that will be extremely difficult to replenish – especially in volatile weather conditions.

Already climate change has impacted the agriculture sector, so an El Niño may have an even greater impact amid the global warming. Does this mean there may be an opportunity for outsized returns from agriculture or other sectors?

The Oceanic Niño Index has indicated eight historical El Niño periods in the time frame since 1983, when sector data is available for the S&P GSCI. Surprisingly, it’s not the agriculture sector that benefits, at least right away. Notice only 4 of 8 periods resulted in positive returns for the S&P GSCI Agriculture with a slightly negative average return of 88 basis points.  However, livestock fared better with premiums of 7.4%, and the metals showed positive performance in most of the periods with average returns of 25.3%  and 8.9% from industrial metals and precious metals, respectively. The super high return in 1986-88 is interesting since the commodity stock cycle was at a similar turning point as today.

Despite the average positive returns in all sectors except agriculture during El Niño, this does not mean there are no opportunities to profit in agriculture from the crazy weather.  The spikes in the sector happen with a lag, so it could take up to a year or more to feel the impact though usually at least one spike happens very soon after.  On average the first spike month has returned 16.6% with several possible high spikes following. Please see the table and chart below. 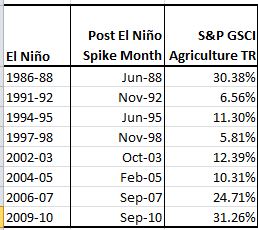