The S&P GSCI Gold lost 3.9% in May and has hit its lowest index level since January. 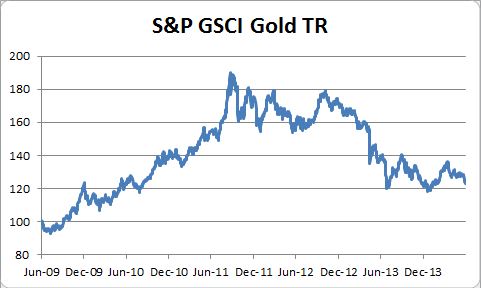 This questions whether gold can recover after its biggest historical drop since 1981.  According to the Federal Reserve, the U.S. economy is strengthening, labor market conditions are improving and inflation has been low in the expanding economy.  According to Yellen, “looking ahead, I expect that economic activity will expand at a somewhat faster pace this year than it did last year, that the unemployment rate will continue to decline gradually, and that inflation will begin to move up toward 2 percent.”

These comments don’t fare well for gold so India’s import policy may be its only hope for price recovery.  Below is a summary of questions from a recent interview about the driving forces of gold.

Gold prices have cooled off in recent weeks and are hovering at around $1280-1290 an oz. The price is much below the year-before when levels of about $1380-1400 was seen in May 2013. What according to you is causing weakness in gold prices?  The idea of gold as a safe haven means investors have used gold as a store of value.  As the Fed tapers, the risk-off environment is subsiding with a potentially improving U.S. economy and stronger dollar, so the demand for gold as a safe haven has declined putting pressure on the price.

What are the factors that can help gold prices recover from these levels? Do you see that happening any sooner? A crisis might drive up demand for gold, which we have seen in mini waves as compared with the sizable global financial crisis. Recently spikes occurred from the tensions between Ukraine and Russia.  Other supporting factors could be if Indian imports improve from lesser restrictions or if the Chinese local premiums increased to about double their current $3 levels over the global benchmark.

India has been a major gold consumer globally. The Indian government had taken measures to restrict gold imports to bring current account deficit under control. Are these measures hurting the gold market globally? How do you think Indian policies with regard to gold play a role in global price determination? Anytime an outside force interferes with the supply and demand equilibrium, there is an impact.  India’s restriction on gold imports has had an adverse effect on the price of gold by fundamentally enlarging the supply pool in circulation – or in other words –  restricting demand from the world’s second largest consumer.

What are your views about the industrial metals’ demand and supply scenario for the rest of the year? Do you think Chinese demand and inventory built-up would continue this year for copper and other metals? With low inventories across the commodity complex, industrials are more susceptible to supply shocks than demand drops. Opposite from the impact on gold price from India’s import restriction is the positive price impact of the Indonesian export ban of nickel on nickel price, which is up 38.1% in the S&P GSCI in 2014.

What kind of movement in demand and prices do you expect in overall commodities market during this year?  The Chinese demand is having less of an impact on prices than the supply shocks since the inventories are low. The storage situations turned to shortages with diminished cushions to soften the blows of the shocks. This is a favourable environment for commodities from the combination of possible inflation and interest rate rises in conjunction with low inventories driving down correlations and up returns, again from supply shocks. We also may be at a turning point in the equity/commodity cycle that can be reflected through higher commodity performance than equity performance for the first time after six years.

How much importance does Indian commodities market hold in global markets? Is the new government formation in India going to affect commodities market globally? How? India is an important consumer of commodities, though the futures market is not yet developed enough to have contracts included from local exchanges in major indices. If the new government creates growth that may help the economically sensitive commodities like energy and industrial metals, but if there is turmoil, then gold may get a boost.

Several foreign investors and trade participants have shown lack of confidence in India’s commodity exchanges, as the largest exchange in India, Multi-Commodity Exchange (MCX) is facing legal issues with its promoter getting arrested for allegations of financial scam. Has it affected the confidence of market participants and investors overseas? The market impact of investor confidence is difficult to attribute to isolated factors, especially on less developed exchanges. Again, generally, if investors feel fear, they may flee to gold as a safe haven rather than economically sensitive commodities.