Equity and Credit Markets in Sync?

Sectors: A tale of American Culture

Long and Short of It: Munis Outshine Equities in 2014 as Demand Holds

The week ahead should be a busy one with a number of economic indicators scheduled for this week.  Monday starts with a less relevant number, the Treasuries Federal Budget Summary ($106.9bn actual versus $114bn, expected) leading into the more important April Retail Sales (0.4% expected) which after a revision on last month’s number up to 1.2% compared to the expected number could bring some surprise.  Other important indicators of the week will be the MBA Mortgage Applications (5.3% prior), April’s PPI (Producer Price Index, 0.2% expected) and the monthly CPI (Consumer Price Index, 0.3% expected).  Jobless Claims (320k exp.), Industrial Production (unchanged, exp.), Philadelphia Fed Business Outlook (14 exp.), Housing Starts (980k, exp.) and the University of Michigan Confidence Survey (84.5, exp.) all will shed some focus on the strength of the economy and have the potential to surprise the markets.

The duration matched spread to Treasuries or the OAS (Option Adjusted Spread) for both the S&P U.S. Issued Investment Grade Corporate Bond Index and the S&P U.S. Issued High Yield Corporate Bond Index are tighter by 16 and 33 basis points respectively.  For the month of May to date, the OAS for high yield is 4 basis points tighter while investment grades are just wider by 2 basis points.  As for their total rate of return performance, these indices are close month-to-date as investment grade returned 0.31% and high yield is at 0.34%.  Year-to-date, the investment grade is still outperforming high yield by returning 4.39% versus 4.01%.

The loan market continued to maintain a healthier tone from last week relative to earlier in the start of the year.  The S&P/LSTA U.S. Leveraged Loan 100 Index has returned 0.29% month-to-date and 1.42% year-to-date.  Bankers indicate a busy pace again this week, with a number of energy-related offerings planned alongside industrial and media deals.

Preferreds continued their run as the S&P U.S. Preferred Stock Index [TR] returned 0.15% for the week.  Month-to-date this index returned 0.37% and is a standout with a year-to-date return of 9.32%.

Equity and Credit Markets in Sync?

The companies in the S&P 500 that borrow the most money are enjoying the benefit of a positive credit market.  The cost of buying default protection on the largest bond market borrowers in the S&P 500 is tracked by the S&P/ISDA U.S. 150 Credit Spread Index and has fallen to lows which can be an indicator of strength for the equity markets.  The cost of buying default protection on $100,000 par value of bonds issued by these companies has dropped from $890 (89bps) on December 31 2012 to $490 (49bps) as of May 9, 2014.

In the recent blog  Sectors: A Tale of American Culture   sectors and their weights are discussed in some detail. The financials sector represents approximately 16% of the S&P 500.  Using that sector as an example, the change in credit spreads of the S&P/ISDA U.S. Financial 30 Credit Spread Index has dropped significantly over the last 16 months.  This is reflecting that the credit markets perspective has turned incrementally more positive with credit spreads dropping from 125bps on December 31, 2012 to 59bps on May 9, 2014.

Sectors: A tale of American Culture

The makeup of the S&P 500 reflects the U.S. overall big-cap public market, and while it’s relevance to investing is well known, it is also a reflection on the changes in U.S. culture. Last December Facebook was added to the S&P 500, signaling the importance of social media. The prior month J.C. Penney was removed, signaling the end of traditional ‘mail order’ houses (Sears, Montgomery Ward, Woolworth), as the new ‘mail order’ houses, such as Amazon.com and to some degree negotiated mail order issue eBay took their business place. In 2012, Apple started to pay a dividend, propelling Information Technology to become the largest dividend payer (who would have tunk it), just as Apple’s price move had helped the sector maintained its position as the largest sector in the index. And in December 2010, The New York Times was removed from the S&P 500, in what many saw as signaling that print products no longer needed representation in the big caps – as the issue was added to the S&P MidCap 400; Eastman Kodak – one of the original S&P 500 and nifty-50 issues was also moved to the S&P MidCap. On a higher level, from the end of 1989, the shift has been to Health Care, as Americans live longer, and spend more to do so; the Finance sector saw financial institutions grow and try to become ‘one-shop’ centers, as retirement responsibility was shifted to individuals from institutions (as health care is now doing), and investing, insurance, and ‘planning’ has grown; and of course Information Technology, to which the capabilities of my smart phone overpowers rooms of computers from when I used key-punch cards in college (I still have some in the office, along with a few 5” floppies, and an epcdic 6250 tape). Down over the period, partially because of the faster pace of the growth of the former three, is materials, which is partially due to the shift in global operations (this is a U.S. index, even though foreign sales for the S&P 500 are approaching 50%). Consumer groups have declined, partially due lower market values, inspired by lower margins and profits (again, global shifts in production play a key issue). However, the largest decline is in the Industrial sector, where the share of ‘made in the U.S.A.’ and ‘look for the union label’ has declined – which is a commentary in and of itself. Not seen in the sectors is Transportation, which declined so much it was moved from a major group (there were four originally: industrials, transportation, financials, and utilities) to a sub-group within Industrials. And while I’m on sectors, let me note that most investors don’t realize how small energy is – at 10.6% of the index it ranks 6th in market value of the 10 sectors. That wasn’t always the situation. Energy, for a very brief period in July 2008 was the largest sector under GICS (then Information Technology and Financials). And if I go back to my Stock Guide days (where I started), and construct proforma groups, the 1980 representation for Energy is 28.7%, with financials and the equivalent of Information Technology being a lot smaller.

As for those die-hard capitalists who denounce sentimental retrospectives (although there is always money in sentimental retrospectives – just ask the movie industry), here are the hard, cold prices. News reports typically focus on short-term gains, sometimes the big winner for the day, then at month-end, quarter-end and year-end. The news follows the ‘glory’ of the win, quick money, and playing the long-shot. However, many investors are long-term and not home-run hitter, and they measure their numbers over years and decades. Long-term investing has different characteristics. For that time period dividends count significantly, since they pay every year – in good markets and bad (cash-flow is up there in importance), and when compounded can change the return (and therefore the rick-reward trade-off) significantly. To illustrate, utilities are generally considered slower, but steadier growth investments, paying dividends as they go; they typically (and there are lots of non-typicals out there) attracts income seekers and those wishing lower risk and lower volatility. Since 1989 utilities have returned 3.03% compounded annually, but with dividends added back in, they have returned 7.85% – lower than the S&P 500’s 7.10% stock return, but closer to the 9.41% with dividends (which is a risk-reward trade-off). Information Technology, a sector known for higher risk, has returned 9.51% in stock, and slightly higher with their lower dividends – 10.49%. The difference in breakdown is significant, but so is the risk, with each investor deciding their own trade-off. Sector investor is also popular for long-term trends, where investors believe certain groups will need to survive and prosper over time. Health Care, which is up 11.66% with dividends (the best of any sector) and energy, which is up 11.59% are examples.

Long and Short of It: Munis Outshine Equities in 2014 as Demand Holds

The long end of the bond market continues to enjoy double digit returns.  The S&P Municipal Bond 20 Year High Grade Index has returned just under 12% year to date with yields dropping by 70bps on the year.

Keeping an eye on bonds from Puerto Rico, the S&P Municipal Bond Puerto Rico General Obligation Index has returned 12.26% year to date helping to offset a 2013 decline of over 20%.

Investing, for some can be a pretty cumbersome task. Surprisingly, many professionals may also confess to being lazy in the “investing” department. Very often investment houses enthuse the dormant investors with a rendition of a very popular slogan, “You are working hard for money, but is your money working hard for you?” It’s the same old story that we hear over and over with excuses founded on busy schedules, daily routines of hectic work and simply put, no time. Many of us are comfortable just knowing that our monthly paycheck sits safely, resting in a bank savings account. Currently, the average savings accounts interest rate(s) are between 4% and 6% but are we really earning that interest? The Inflation Rate (Consumer Price Index) in India has been close to reaching double-digits since 2009. If we were to actually understand the ultimate net return on our savings, we would realize that it’s actually negative!

In India, there are two popular avenues of investment, bank deposits and gold. The annual bank fixed deposit rates for the past year have ranged between of 8% and 10%. Realizing that inflation is in fact eroding the returns does give cause to look for viable investment options. As per the latest World Gold Council report, India, for the first time lost its tag of the world’s largest gold consumer to China, who was reported to have 1,065.8 tons in 2013. The Indian government in order to reduce the large current account deficit, introduced a number of measures last year.  These measures are intended to curb the demand for gold, which is one of the country’s biggest imports.  However, it seems that this was only an initial check as the demand for gold is expected to be back on the rise this year. While a few see gold as an investment, many consumers merely hoard this commodity, thereby widening the deficit even further. 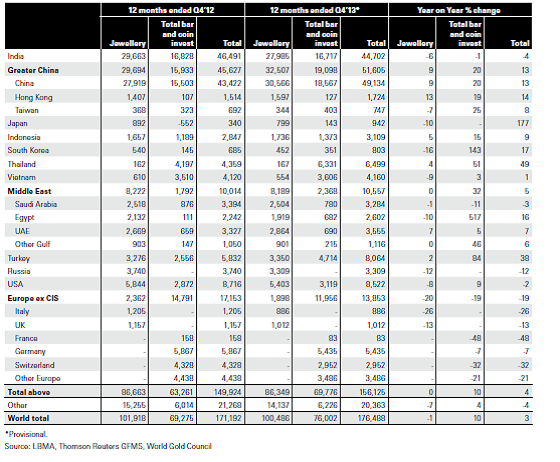 As shared by my colleague, Jodie in an earlier post on Indexology, in 2013 gold lost 28.3%, the most in a single year since 1981, when gold lost 32.8%. Following this event, a recovery period for gold started, which lasted 25 years. If history it set to repeat itself as we have all come to believe it does in some form or fashion, there may be a long recovery period for gold to follow. However, much of this depends on the fundamentals of investing for today and the availability of investment options today which are supposed to make investing effortless and simple. Olympic Metals: Going For The GOLD?!