This morning’s Wall Street Journal joined (actually, re-enlisted in) the chorus of those arguing that 2014 would be a time for stock pickers to “shine.”  The lynchpin of the Journal‘s case will be familiar to advocates of a “stock-picker’s market.”  That argument is that since correlations in the U.S. equity market are declining (perhaps as a consequence of the Federal Reserve tapering its support of the Treasury market), stock selection strategies will perform better than in a more macro-driven investment environment.

That conclusion may turn out to be correct — we’ll know in less than a year’s time.  But it won’t be correct for the reason the Journal, and so many others, typically cite.

Correlation is largely a measure of timing — it tells us whether two assets tend to go up and down at the same time.  Here’s a simple illustration:

Stock A and stock B are perfectly negatively correlated — whenever one goes up, the other goes down.  But their returns are identical.  An omniscient day trader would benefit hugely from their negative correlation.  For a stock picker with a longer time horizon, it doesn’t matter — his return is the same regardless of which stock he picks.  Despite the negative correlation, that doesn’t strike us as a good environment for stock picking. 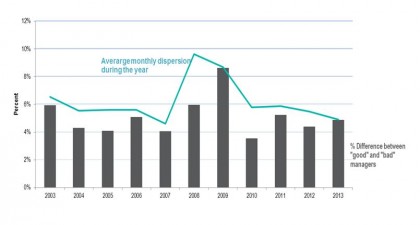 The line in the graph above represents the average dispersion for the calendar year in question; the bars represent the interquartile range (i.e. the 25th percentile minus the 75th percentile) of large cap core equity managers in our year-end SPIVA survey.  The relationship isn’t perfect, but it’s certainly true that the gap between better- and worse-performing managers tends to be greater when dispersion is higher.

Treasuries closed the week returning 1.02% as measured by the S&P/BGCantor Current 10 Year U.S. Treasury Bond Index.  Last week’s return was the strongest weekly return since the flight to safety trade driven by Ukraine / Russia news from the week of March 14th, which remains the largest weekly gain for the year.

This week started with a hop in Retail Sales, as reported numbers were stronger than expected and are at levels that have not been seen since September, 2012.  Treasuries sold off moving the 10-year yield to a 2.64%, up from its Friday close of 2.62%.  Tomorrow’s March CPI number (0.1% expected) along with Housing Starts (975K expected), Jobless (315k expected) and the end of the week Philadelphia Fed Outlook, all have the potential to move the indices.

Away from domestic economic measures, $18 billion of the 5-year TIPS will be auctioned by the Treasury on the 17th.  The week has the potential to be quiet heading into the Easter Holiday, though global politics and the evolving Ukraine situation can affect the directions of markets at any time.

This week’s new issuance in investment grade debt continues at a healthy pace, the majority of new paper focuses around 3 and 5-year maturities, but there were some longer maturity deals such as $500 million Gerdau 7.25% 30-years.  The S&P U.S. Issued Investment Grade Corporate Bond Index returned 0.8% for the week and is just under about 1% (0.98%) for the month.  Year-to-date investment grade corporates are returning 3.90%.

The pace of loan issuance slowed up a little this past week as issuers dealt with existing calendar deals that have been in the works.  The digestion of recent aggressively structured and priced deals has the S&P/LSTA U.S. Leveraged Loan 100 Index giving up ground for the week returning -0.10%.  Month-to-date this index is down -0.3% and the yearly return has hovered just at or under 1% since the middle of March.

Preferred shares are hybrid equity securities, with characteristics that lie between the traditional fixed income and equity asset classes.  Like common shares, preferred shares represent ownership in a company and are listed as equity on the balance sheet; the ownership isn’t entirely the same though.  Preferreds have preferential rights to dividend payments before common shares, which is thanks to their seniority in the capital structure.  On the other hand, common shares come with the right to vote on corporate matters, a feature that preferreds lack.

Several characteristics that preferreds share with bonds are that they are issued at a fixed par value and dividend payments are a fixed percentage rate of par. Independent credit rating agencies, such as DBRS and S&P Ratings Services, rate preferred securities using the same guidelines as bonds.  Preferreds offer less security to investors than bonds, as they sit lower in the capital structure and issuers have more flexibility in cancelling or postponing a dividend payment if it is running into liquidity issues.

A main benefit of preferreds is that they pay sizable dividends, with most paying a fixed amount on a quarterly basis.  In fact, when looking at the asset class yields of bonds, preferreds and common equity, one can see that preferreds offer the highest yields.

With interest rates continuing to remain at historic lows, investors have been looking for investments that offer higher yields than common stocks and bonds.  Since preferreds meet this condition and have shown relatively low price volatility, the asset class has been a benefactor of investor demand.  The preferred market in Canada grew to an estimated CAD 61.5 billion at the end of the year in 2013, doubling in size since year-end 2008.  The exhibit below shows the growth of the Canadian preferred market over the past five years.

March marked the fifth anniversary from the Bear market low. Dividends have not only recovered from their bottom, but are setting new records. Yields are less, but relative to other instruments they remain competitive, and have a much lower tax rate. Two observations that became apparent are the risk-reward trade off and the yields. For the S&P indices, the large-cap market has more issues which pay a dividend and more issues which increase year-after-year. On a risk-reward note, the S&P 500 offers a higher yield, with a richer history of increases. However, that security of income comes at the cost of capital appreciation, with the S&P Small and Mid caps having returned more in stock price (and total return).

Data is for U.S. Domestic Common Stock, not just the S&P 500

U.S. domestic common issues set a first quarter record for dividend increases, as the ‘shareholder’ return theme continued. Increases have been made easier by record earnings and record cash holdings. Additionally, many issues (especially large-caps) have heard the knocking at the boardroom door – from activists. I expect strong dividend growth to continue in 2014, as ‘shareholder return’ continues to be the battle cry from boardrooms, and those knocking at the boardroom door. I expect the actual cash payments for 2014 to post a double-digit increase over the record setting 2013 level. Yields remain competitive, with qualified dividends have a tax advantage.